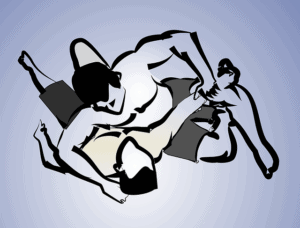 Instead of answering this question, let’s first answer another question. That is, why not learn both Brazilian jiu-jitsu and wrestling. You will become a better grappling by taking the time to learn both arts instead of just one.

“Absorb what is useful. Discard what is not. Add what is uniquely your own.” ― Bruce Lee

The truth is if you want to become the best grappler or best martial artist you can be, then you need to learn the best practices from all of the grappling arts. Each grappling art whether BJJ, wrestling, judo, or whatever else has its strengths and weaknesses.

That said if you do not have a grappling background you do need to start somewhere. So do you start with BJJ or wrestling? Well, to answer that question you first need to define why you are asking in the first place. Is it for self-defense? Is it for MMA? We will look deeper into these two questions later, but first, let’s look at the pros and cons of each grappling art.

Submissions: The biggest advantage that BJJ has over wrestling is its wide variety of submissions. With the exception of catch wrestling, wrestling lacks the submissions found in Brazilian jiu-jitsu. Even if a wrestler can take a jiu-jitsu guy to the ground they will lack the finishing submissions to end the fight.

The BJJ player, however, has plenty of submissions even off of their back if they were to be taken down. Of course, in MMA a wrestler could use ground and pound techniques. That said, ground and pound is not something practiced in pure wrestling. Submissions, however, are taught in BJJ.

BJJ Is For Everyone: Typically speaking most BJJ schools offer classes for just about anyone. You do not have to be a super athlete to learn BJJ. In fact, BJJ is known for being a martial art where a smaller trained person could defeat a larger stronger untrained person.

If you want to train at a wrestling club, on the other hand, you will need to be in pretty good shape to keep up. You will likely not find a wrestling club that does not include a very extensive strength and conditioning program. Of course, this is not a bad thing by any means. But it is certainly not for everyone.

Athleticism: Of course most BJJ players at a high level are incredible athletes. That said, you can easily find a BJJ academy that does not incorporate strength and conditioning. Like previously stated this is not something you will find at a wrestling club.

Takedowns: Though your BJJ academy might teach takedowns, BJJ does not have the same level of takedowns as wrestling does. Most BJJ schools do not spend a ton of time in the stand-up position. Wrestling, on the other hand, will always start on the feet.

Takedowns: Whether Greco-roman or freestyle, wrestling beats BJJ when it comes to takedowns. This can be a good skill to master for many situations. In an MMA or self-defense situation, a good wrestler will get to decide whether or not the fight goes to the ground.

Not For Everyone: As stated before wrestling is not for everyone. It is a tough sport and might not be for someone who does not like to train hard. Of course, if you can hang this will only make you a better grappler.

Lack Of Submissions: Wrestling simply does not have submissions like BJJ. Though wrestlers can take an opponent to the ground it is lacking in finishing submissions. That is of course with the exception of catch wrestling

Note: As you can see BJJ and wrestling have different strengths and weaknesses. This is why it is best to learn what you can from both arts.

It would seem that if wrestling had some good submissions it would be a complete grappling art. Well in many ways catch wrestling or catch as catch can checks all of those boxes. Catch wrestling is the father of both freestyle and folkstyle wrestling.

This is because catch wrestling will use pain to manipulate their opponents. They have many submissions that are not usually practiced at BJJ schools. Good examples would be neck cranks and spine locks.

That said, many BJJ schools might not want you to use some of these painful submissions when rolling in class. So you might wanna check with your teacher or rolling partner before you put someone in a neck crank. For more on this check out my article: Catch Wrestling Vs. BJJ here!

BJJ Vs Wrestling For MMA

Here is another debate that has been going on almost since the beginning of MMA. There is no doubt that both of these styles have their place in MMA. In fact, MMA is largely responsible for the great successes of Brazilian jiu-jitsu. Rorion Gracie was one of the founders of the UFC. I believe it was his goal to showcase in front of the world how effective BJJ was.

It seemed to work out as the first UFCs were dominated by the much smaller Royce Gracie. Since then it would be very rare to find an MMA fighter that does not practice BJJ. Of course, if you want to fight MMA today you need to be a more well-rounded fighter than they were in the early days of MMA.

Wrestling is by many people’s accounts the best foundation for MMA. Most of the current UFC champions come from a wrestling background. Because of their excellent takedowns, wrestlers often get to dictate the direction of the fight. They can choose to keep the fight standing up or they can choose to take the fight to the ground.

Wrestling will also teach you how to train hard. Wrestlers have developed a work ethic and general toughness that will transition well into MMA.

BJJ Vs Wrestling For Self-Defense

This is a hard one because we first need to talk about the difference between classic BJJ and sport BJJ. Brazilian jiu-jitsu started out as a self-defense martial art. As BJJ got more popular many schools started to focus more on BJJ competition than self-defense.

As you might assume there are plenty of moves you would do in a competition that would not be practical in a self-defense situation. After all, you do not have to worry about being punched in the face during a BJJ competition.

Though at its core BJJ is a self-defense system many schools are only focused on sport jiu-jitsu. Both sport and traditional BJJ are amazing and both have their place. That said if you are looking to learn self-defense make sure you choose a BJJ school that is self-defense-focused.

Instead of think of it as BJJ vs wrestling, think about how you can use both arts to achieve your goals. It is important to define what you want to accomplish. Do you want to learn self-defense, do MMA, or do you just want to have fun and get some exercise?

There is nothing wrong with any of those answers. These are simply questions to ask yourself that might help you decide which direction you want to go. Either way, both of these grappling arts are amazing and you can’t go wrong learning either of them.