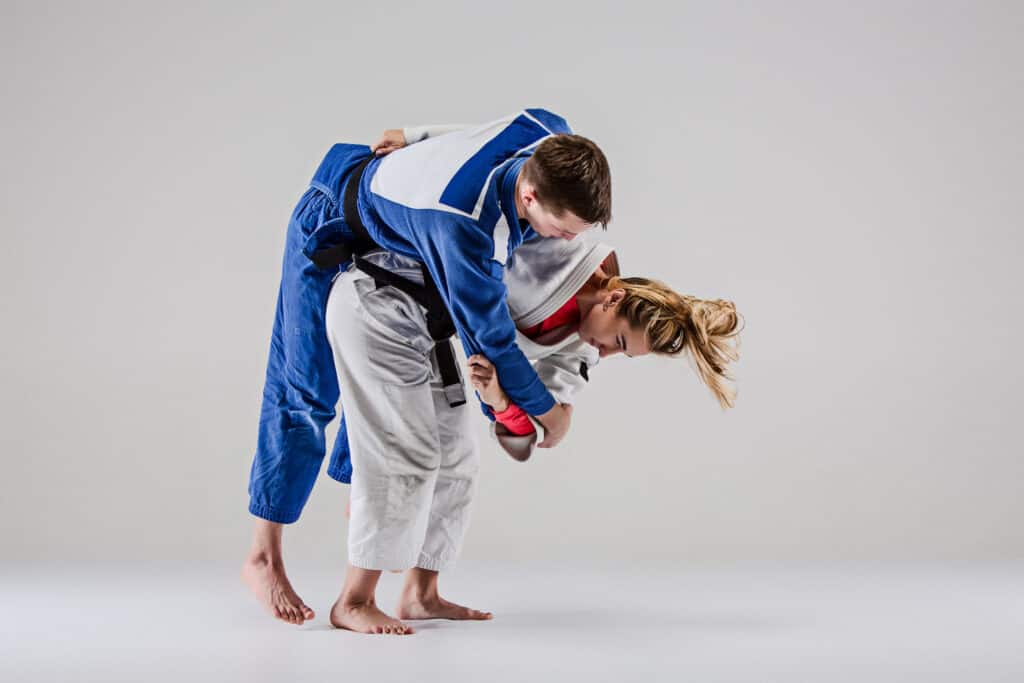 One of the more intimidating things you will need to learn as a BJJ white belt is takedowns and throws. After all, every BJJ competition starts standing up, so it is very important that you know how to get your opponent to the ground. In addition, you will probably be standing up if you were ever in a self-defense situation as well. But what are the best BJJ white belt takedowns or throws that are easy and effective?

BJJ is not as known for its takedowns and throws as much as other grappling arts such as wrestling and judo are. You will, however, need to learn a good handful to become an effective and well-rounded BJJ player. Most of the throws and takedowns in this article are going to be the easy and basic throws from judo and wrestling. However, the goal is to find the best takedowns and throws for BJJ white belts.

After all, not every throw or takedown from judo and wrestling are going to transition well to BJJ. Since they are different sports with different rules, there are some takedowns and throws that BJJ players should avoid.

Though most wrestling takedowns and judo throws are allowed in competition, some are too risky for BJJ rules. Typically these are the throws and takedowns that will expose your back too much or make you land in an undesirable position. That said, before we get into the best BJJ white belt takedowns and throws, let’s first talk about why they are important.

Why BJJ White Belts Need To Learn Takedowns And Throws

When you are a BJJ white belt you do not need to know every takedown or throw in the book. Instead, you should focus on mastering a few easy and effective takedowns. As time goes on you can adopt more and more takedowns and throws into your game. But at first, just focus on learning a few takedowns and a few throws that are white belt friendly.

It is true that takedowns and throws are not as big of a focus in BJJ competition as they are in judo or wrestling. This is mostly because takedowns take a lot of energy and only reward a BJJ player 2 points. To add to that you are also simply allowed to pull guard in BJJ, though you are not awarded points for this.

However, some people will choose to pull guard and go for an immediate sweep instead of going for a takedown. This is easy to understand as it would reward them more points. Because of this, many BJJ players avoid getting good at takedowns.

If it were up to me takedowns would be worth more points than they are in BJJ, but hey I don’t make the rules. That said, takedowns are still a part of the game. So you should at least learn the basics of a good takedown game even if your game plan is to pull guard.

That said, the main reason I believe you need to learn takedowns and throws as a white belt is for self-defense. Before sport BJJ, the main focus of jiu-jitsu was self-defense. Of course in some academies it still is, but this becoming rarer and rarer due to the rise in popularity of sport jiu-jitsu.

That said, your BJJ is not as effective in a street situation if you can’t even bring your attacker to the ground. On top of there are some things that you might do in a competition that could get you hurt in a self-defense situation.

Pulling guard in a self-defense situation is not a good idea for many reasons. So knowing some good takedowns is an essential skill to master if you need to bring an attacker to the ground without putting yourself in a vulnerable position.

In addition, if you know some good throws you might be able to throw your attacker down and run away. After all, avoiding a confrontation is always the best choice for self-defense.

Another great thing about the double leg takedown is that it is effective in no-gi and traditional BJJ because it does not require the use of the gi. There are a few ways to execute a double-leg takedown.

In this video, by Eduardo Rocha, the double leg is a variation where the knee drops to the ground. This is great for classes and competition but might not be the best example for self-defense on a concrete street. Thankfully there are other ways to pull off the double leg that does not force you to drop your knee on the ground.

But for this example, we are going to look at a double leg that is very effective for BJJ competition and MMA. This is the bread and butter of takedowns for BJJ white belts.

Another great takedown that can be used in gi and no-gi BJJ is the Single-leg takedown. This takedown is a fundamental takedown you need to learn for BJJ. It is also one of the basic takedowns that wrestlers will learn as well. There are many variations of the single-leg takedown. Some can incorporate grips with the gi but this is certainly not necessary.

Because of this, the single-leg takedowns should be one of the first takedowns you should learn for BJJ. Here is a great example from the Bernardo Faria BJJ Fanatics youtube channel. In this video, Andre Galvao demonstrates a single-leg takedown that is very effective for both gi and no-gi BJJ. It is the perfect takedown to learn as a BJJ white belt.

For whatever reason, this has always been the easiest takedown for me to execute. It actually even came easier to me than the double or single leg takedowns. That said, I am not sure that everyone has had that same experience. Either way, this is a takedown that is great to learn as a BJJ  white belt.

It is also the last takedown on this list that is just as easy to execute in no-gi BJJ as it is traditional BJJ because you do not need gi grips for this takedown. There are a few variations of takedowns you can do from the arm drag. This is one good example from the Tristar Gym youtube channel.

The Ouchi Gari is a very simple and effective judo trip that is perfect for BJJ white belts. Again here is Shintaro Higashi demonstrating some tips for an effective Ouchi Gari!

Another great judo throw for BJJ white belts is the Uchi Mata. This is probably my favorite throw to pull off in BJJ. In this video, Shintaro Higashi demonstrates the Uchi Mata from a BJJ stance.

Last but not least is the Sumi Gaeshi. This is an amazing technique if you pull it off properly. It might look intimidating at first but it is certainly something you can learn as a BJJ white belt.

Not only is it just awesome looking, but it can also land you in a great position. Here is another video from Shintaro Higashi demonstrating the Sumi Gaeshi for BJJ.

As you have probably noticed I used a lot of videos from Shintaro Higashi. This is simply because he is my favorite person to learn judo from as a BJJ player. He is great at helping BJJ players learn judo techniques that are effective in our sport. On top of that, he is also great at modifying the techniques to be better suited for BJJ competitions.

He has a great instructional I would suggest checking out if you are interested in incorporating judo throws into your BJJ game. It is called: Low-Risk Judo Throws For BJJ by Shintaro Higashi.

Another great digital program to check out is Foundations Of Brazilian Jiu-Jitsu By Bernardo Faria. This DVD goes over the fundamentals of BJJ including some basic takedowns. It is in my opinion the best instructional for BJJ white belts.

Since the double leg and single leg are the foundational no-gi takedowns I would suggest learning those two for sure and adding a few judo throws on top of that. You can also look to instructionals to help you develop a better takedown game. I have created a complete BJJ instructional guide here that covers some of the top courses on takedowns for BJJ.