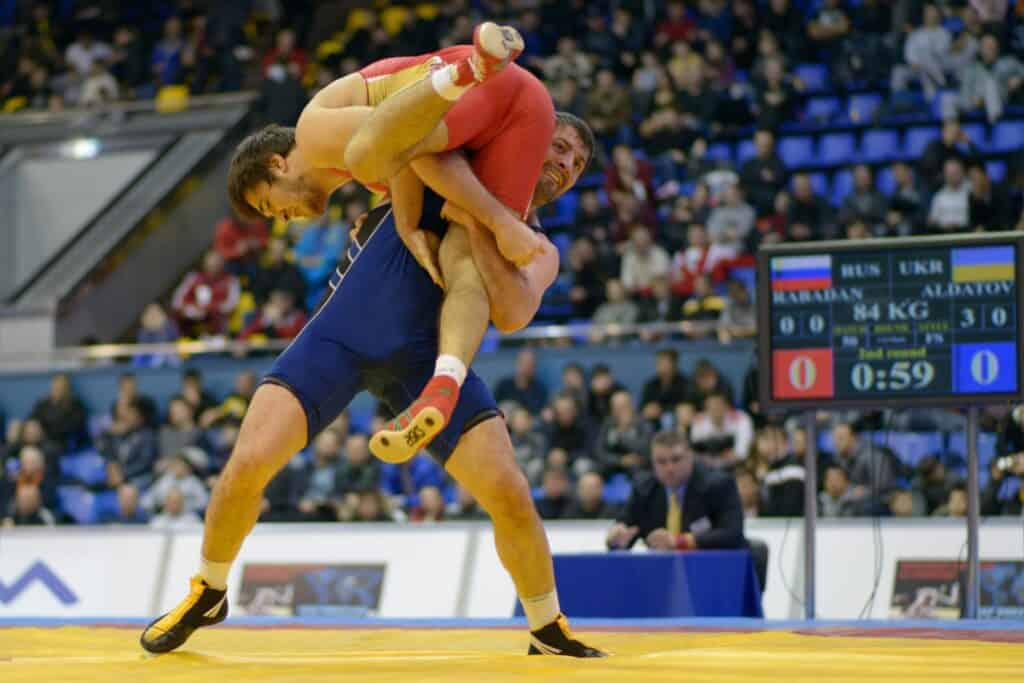 This is because like in wrestling you do not wear a gi. So you do not need to use gi grips in order to takedown your opponent with wrestling takedowns. On the other hand, if you are focused on gi BJJ then you will also want to learn takedowns from judo.

That said, you can use wrestling takedowns in BJJ but you might want to simply modify them to work better with BJJ. This is simply to avoid getting submitted or to put your self in a vulnerable position.

Why You Need To Modify Your Wrestling Takedowns For BJJ

Except for in catch wrestling, you do not need to worry about submissions in wrestling. Because of this it can be natural for wrestling to put their head in a bad position when going for a takedown on a BJJ expert.

For example, a wrestler might use a double leg takedown and a BJJ expert and quickly find themselves in a guillotine choke. This can of course be avoided by keeping your head in the right position when using a wrestling takedown to bring your opponent to the ground.

You will also want to be careful using a wrestling takedown that might expose your back to your opponent or have you land in a bad position in BJJ.

But all in all, there is really nothing to worry about once you learn how to adapt your wrestling takedowns for BJJ.

What Wrestling Takedowns Are Not Allowed In Jiu-Jitsu

In addition, there are some takedowns that would be considered illegal slams in BJJ that might be allowed in some forms of wrestling.

A suplex for example, is allowed in freestyle and greco-roman wrestling but is not allowed in most BJJ competitions.

Most wrestling takedowns that are performed in one continuous motion are allowed. But you do need to understand the differences between illegal slams and takedowns in BJJ.

For example, you cannot lift someone off the ground take a pause and then slam them on the ground. You also cannot pick someone up from the guard or back control and slam them onto the ground.

These are illegal slams and unlike most other wrestling takedowns, they are not allowed in IBJJF BJJ competitions.

That said, there are different rules for different organizations. The ADCC for example allows for variations of the suplex but still does not allow all other slams.

There are a ton of takedowns, throws, and trips you should learn for BJJ. That said, you have to start somewhere. These three are simply some of the most effective wrestling takedowns to learn that are also not overly complicated.

The double leg is probably the most used takedown in MMA, BJJ, and wrestling. It is not only a very effective takedown, but it is also very easy to learn.

You can do this technique with or without the gi since it does not require you to get grips on a gi. For this reason, it should be in the arsenal of all grapplers and mixed martial artist.

Many people who come from a wrestling background are familiar with the single-leg takedown.

However, if not done correctly you could find yourself in a guillotine choke. With this single-leg variation, you will be more likely to avoid the guillotine.

How To Learn  Legal Wresting Takedowns For BJJ

BJJ is an excellent martial art and sport. It is proven in both MMA and self-defense. That said, BJJ is typically thought of as a grappling style that focuses on grappling on the ground.

For some reason many BJJ schools do not put enough focus on takedowns and throws. However, learning to take your opponent down is a crucial aspect of BJJ.

So if your school does not focus on takedowns then you might need to look elsewhere to fill in the gaps in your game.

Thankfully, we can now usw BJJ instructionals and videos online to help fill in the gaps in our game. That said if you are going to spend money learning wrestling takedowns we want you to only buy the best products.

So if you want to take your takedowns skills to the next level in BJJ, then check out my article on best BJJ instructionals on takedowns and throws.