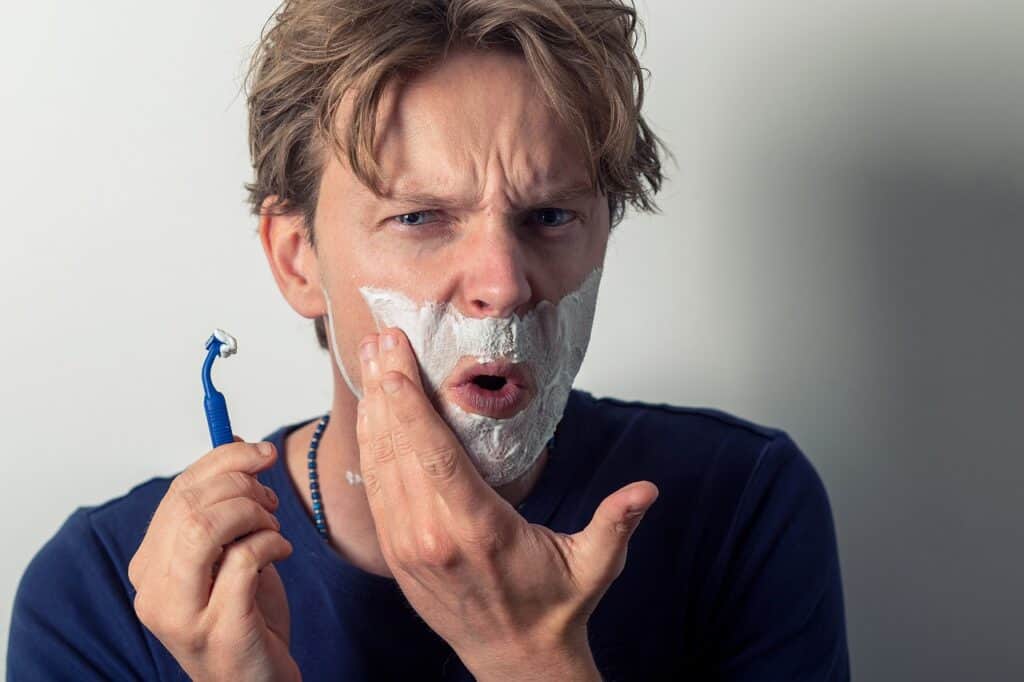 The ancient origins of wrestling are most commonly associated with classical Greece (although they trace back even further). The sport was wildly popular and a staple of Hellenistic culture. Today, the wrestling rules haven’t changed much, but some specific regulations impact athletic attire and hair during matches, like if you have to shave for the sport.

You have to shave for wrestling if your beard is more than half an inch (1.27 cm) in length. If a wrestler’s beard is longer than half an inch, the medical examiner can’t view their skin or perform a proper athletic assessment.

In this article, we’ll go over the wrestling rules as they pertain to the scalp, facial, and body hair. We’ll also provide the justification and rationale behind each of these rules to help you understand why they exist. Lastly, we’ll look into the benefits of shaving for wrestling, both on and off the mat, so keep on reading!

Of course, I cannot say what the rules will be exactly for every wrestling event across the entire world. That said, I will mostly be speaking on the rules here in the USA for high school and college wrestling.

The Rules Regarding Shaving in Wrestling

Regardless of the style of wrestling, you participate in — be it freestyle, Greco-Roman, or folkstyle — you’ll be getting up close and personal with your opponent as you showcase your skills and demonstrate how badly you want to win.

Because of the closeness and physicality of a wrestling match, there are strictly regulated rules to ensure fairness mid-match. These regulations cover the athletes’ wardrobe (singlet, headgear, ankle-high wrestling shoes laced up) and their hairstyles.

When we talk about shaving for wrestling, we refer to facial hair, scalp hair, and body hair.

If you’re interested in learning more about wrestling rules, we recommend you purchase a copy of the 2020-21 NHS Wrestling Rulebook, where you’ll find a complete and up-to-date outline of every competition rule.

Now, let’s dive into the legality of hair in wrestling below.

Do You Have To Shave Facial Hair For Wrestling?

If you’ve ever spent any considerable amount of time watching wrestling matches or engaging with the community, you may have noticed that wrestlers never sport big beards. Upon seeing this, your next thought may be to question whether wrestlers avoid growing their beards out because of practical reasons or because there’s an explicit rule against it.

Truth be told, it’s both.

The NCAA wrestling committee rules on facial hair state that facial hair for wrestlers must not exceed half an inch in length. The rule exists so that medical examiners can view and examine the skin in case of injury.

If the athlete’s beard exceeds half an inch, a mask or beard cover made from a non-abrasive material is required.

If a medical examiner deems a wrestler’s beard to be too thick for a thorough medical assessment during the contest, they’ll remove the beard.

There are many reasons why a wrestler might not want to have long, free-flowing hair. Long hair can impede your vision or distract you during a pivotal moment in the match. It can also become snagged, and that certainly doesn’t feel good.

But what do the rules say about scalp hair?

There used to be a three-point checking system in wrestling to ensure that your hair length is within the legal limit. Your hair was not allowed to exceed your eyebrows, earlobes, or the top of your collar on the back of a t-shirt.

If a wrestler’s hair was too long, they could cut it or braid it securely so that it doesn’t interfere with either athlete. However, the rules have changed recently at least in some high schools and colleges in the USA.

Much of this was sparked after the controversy of an African American student having to shave his dreadlocks or forfeit a match. You can read more about the incident and the change of rules here. In addition, allowing longer hair is more inclusive for encouraging more women to engage in wrestling.

So long story short, If you are looking to get into wrestling and have long hair then you might want to check with the officials in charge of the rules in your area. Simply put, I am not sure what the rules are across the globe.

Why Do Wrestlers Shave Thier Body hair?

Body hair is a broad classification that can refer to arm, leg, chest, armpit, or back hair.

There is no rule requiring an athlete to shave their body hair for competition. The option of whether or not to shave or trim this hair is solely up to the athlete’s preference.

However, most wrestlers will choose to remove most of their body hair voluntarily for strategic reasons. Let’s talk about a few of those reasons in the next section.

The Benefits of Shaving for Wrestling

As we’ve already briefly touched on, there are many strategic advantages that shaving can grant a wrestler. Most wrestlers would, in all likelihood, shave for competition, even if no rules existed.

Because wrestling is such a closely contested sport, any athlete would be wise to take full advantage of any edge they can get. So, how exactly does shaving benefit a wrestler on the mat?

If a wrestler has hair, it’ll create friction when rubbed against their opponent’s skin. This friction can act as a slight grip enhancement and work against you in your opponent’s favor.

It goes without saying that when trying to sprawl on a double-leg takedown attempt, an athlete who is cleanly shaven and likely already perspiring will have much less difficulty than one who has particularly hairy legs, which your opponent can grip onto.

It Prevents Rashes and Chafing

Beards, in particular, can be sharp and cause chafing and rubbing for both you and your opponent.

Over time, this repeated chafing can lead to rashes and skin irritation.

This is why wrestlers tend to view shaving and the proper maintenance of the body, head, and facial hair as a sign of mutual respect. It’s much more pleasant for everyone involved when the athletes don’t have to deal with a distracting beard burn during a match, which is already intense enough on its own.

In writing this article, we wanted to provide you with a clear and objective answer to the question of whether or not you have to shave for wrestling.

In accordance with the NCAA wrestling committee, an athlete’s beard must not be more than half an inch in length. If the wrestler’s beard does extend past this limitation, they’ll be asked to wear a beard cover or mask.