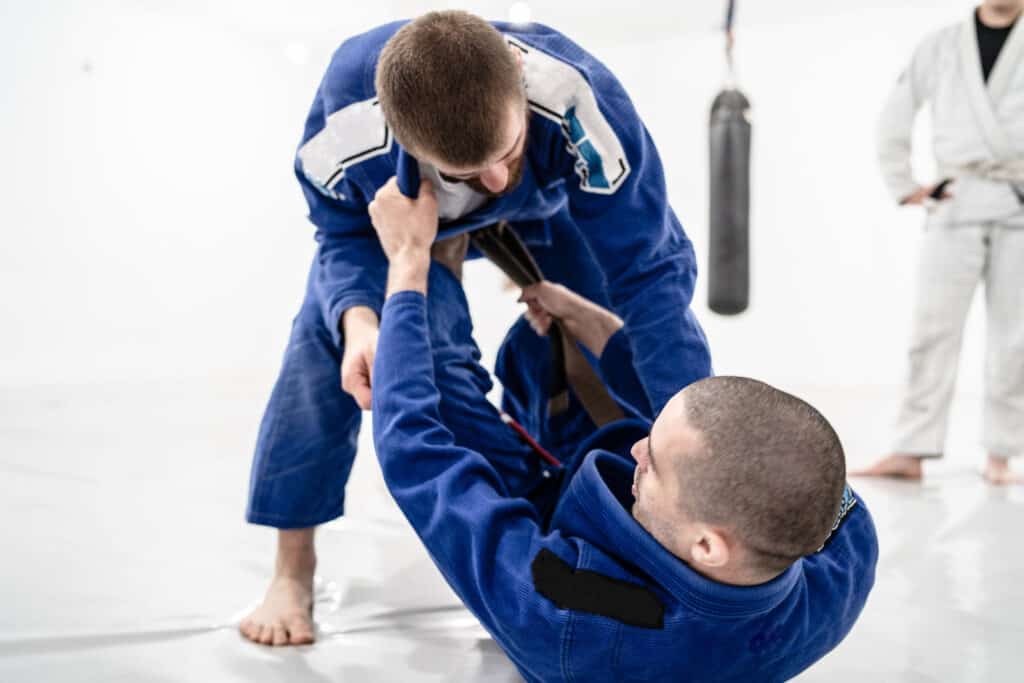 Brazilian jiu-jitsu is one of the most popular martial arts in the world. Traditionally, BJJ has been practiced in its traditional uniform which is called a gi. However, the sport of no-gi jiu-jitsu is quickly picking up steam and many BJJ practitioners are dropping the gi altogether. However, many people argue that training in the gi might actually make you better at no-gi.

The truth is that training in the gi can help your no-gi game. This is because some techniques in the gi require you to execute them with more precision.  However, if you are only focused on no-gi competition or MMA then there is certainly a point of diminishing returns to training in the BJJ gi.

How Training In The Gi Can Help No-Gi

If you are only focused or training for no-gi competitions you might want to take a pause before throwing out your BJJ gi. There are actually some benefits to training in the gi that can help your no-gi improve. The one area that most people would agree on is that training in the gi helps your defense.

Training In The Gi Can Help Your No-Gi Defense

If you have never worn a gi before let me first explain that a gi consists of a heavy jacket, pants, and a BJJ belt. The jacket is made of thick material that has a thick collar and lapel that is easy to make grips with. Because of all of this material, there is a lot more friction when rolling in the gi.

In no-gi jiu-jitsu, you are likely wearing a rash guard and either grappling shorts or spats. When rolling in no-gi you are much more slippery and it is often easier to escape out of bad positions. This is because the gi allows for certain grips and the thick material causes more friction.

Because of this, you must be more technical and precise to escape bad positions in the gi because there is little room for error. In no-gi on the other hand you might be able to escape the same position without the same level of perfection executed on the escape.

For this reason, many would argue that training in the gi forces you to develop a better defense.  After all, if you can manage these escapes in the gi then it will be a cakewalk in no-gi.

Training No-Gi Can Improve Your Offense

On the other hand of this argument, it could be argued that training no-gi could help your offense in gi BJJ. This is for the same reason that training in the gi can help your no-gi. Since it is easier for your opponent to escape a bad position or submission in no-gi, your offense has to be that much better.

In many submissions such as the armbar, for example, you do not have much room for error when you cannot rely on the friction of the gi making it harder for them to slip their arm out. So all in all, gi can help your no-gi jiu-jitsu and no-gi can help your gi jiu-jitsu.

Ok, so we have established that there might be substantial evidence that training in the gi can help your no-gi. But at what cost is it really worth it? In my opinion, it would be good to train in the gi every once in a while even if your goal is no-gi competition.

That said, there is certainly a point of diminishing returns. If your goal was no-gi competition and you could only train in the gi or in no-gi then obviously it would be better to focus on no-gi. Thankfully, however, the world does not have such strict rules.

It would probably be ideal to focus heavily on your defense when you train in the gi. This could be a good opportunity to test your defense on lower belts. Instead of focusing on smashing them let them get into a good position and work on your escapes. If you are a white belt on the other hand then you are probably working on your escapes by default.

Start Out Training In The Gi Then Switch To No-gi

If you actually have not started training jiu-jitsu then you might want to start out in the gi even if your want to transition into no-gi or MMA later. This is because the majority of your time rolling as a white belt will consist of your getting smashed by higher belts.

Because of this, it is a good time to iron out your defense game. By starting in the gi you will have to become more efficient at escapes and getting out of bad positions. Not saying you need to wait to start training no-gi but building a base in the gi might help in the long run.

If after 6 months or a year or two you want to focus only on no-gi then you will have at least built a base and would probably have a decent defense. In the long run, you probably would not regret it even if you are only focused on no-gi. That said, if you are at a school like 10th planet that only does no-gi, I am not saying you need to leave your school.

But if your school offers both then why not get started in both and if you want to transition into more no-gi later then you can. After all, you might end up liking the gi more than you expected to in the first place.

Or hopefully, wearing some amount of clothing for that matter. Because of this learning how to grapple in multiple situations is better for self-defense. Learning how to use someone’s clothing in an altercation can be a huge advantage to you. Even if they are not wearing a thick jacket, you can probably still use their clothing to help you.

For example, learning how to hold their legs down or controlling them using their pants could help you avoid getting kicked or kneed in the face. If they are wearing a jacket or something with a collar then it will only be so much easier to take them down or choke them.

Of course, the first rule of self-defense is to avoid these conflicts altogether if you can. It is the safest bet and might help you avoid a lawsuit even if you are not the aggressor.

Should You Do Gi BJJ If Your Focus Is MMA?

I go into this further in my article: Is no-gi better for MMA than traditional BJJ, but basically MMA fighters don’t want to spend too much time focusing on things that do not work for MMA. For example, any BJJ submission or technique that involves using the gi cannot be used in MMA.

So why would an MMA fighter devote precious time working on cross-collar chokes or improving their lasso guard? It just does not make sense to me.  So my personal opinion is that MMA fighters should focus more on no-gi than gi jiu-jitsu. The only exception might be if you are brand new to grappling.

Focusing on traditional BJJ for the first few months might be beneficial if you are young and have plenty of time to develop your game. That said, if MMA is your focus then there is certainly no point in working on techniques that do require a gi and do not translate into MMA.