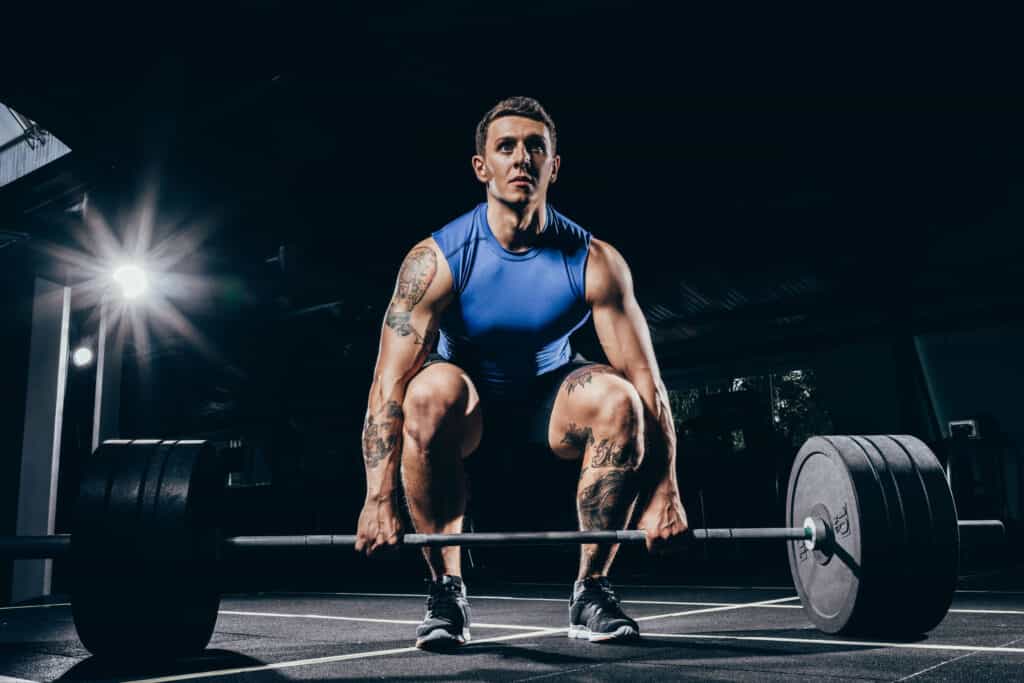 Lifting weights does improve your jiu-jitsu game. Though learning technique might be more important, getting stronger and more athletic is only going to make you a better BJJ athlete.

So don’t let someone tell you that lifting weights is going to slow you down. Just make sure that focusing on technique does not take a back seat to your strength and conditioning program.

No matter what sport you play lifting weights is only going to make you more athletic and improve your performance.

Once upon a time, many coaches were afraid that lifting weights were going to slow down their athletes. Though some may still hold this position, this old theory is nothing more than a misunderstanding from the past.

Funny enough the science seems to conclude just about the complete opposite of what they thought. If you look at the fastest athletes in the world they are all very muscular.

Sure they are probably not focusing on powerlifting or winning a Mr. Olympia title, but they are certainly lifting weights.

Why The Best BJJ Athletes In The World Lift Weights

Though there are a few high-level BJJ athletes in the past that did not lift weights, today you would be hard-pressed to find a high-level grappler that does not incorporate a strength and conditioning program.

I am not saying that they are spending hours in the gym trying to get a nice bicep pump like a bodybuilder, but they certainly take their weightlifting seriously.

If you look at the best BJJ grapplers in the world today you can tell that they obviously lift weights. This is because they know that if they are if two jiu-jitsu players are of equal skill, the stronger of the two will have a great advantage.

This is not unique to BJJ but will all sports really. Part of becoming better at any sport or martial art is first working on the skills of the sport and secondly becoming physically conditioned for the sport.

You will also need to work on your endurance, flexibility, and all of the other aspects of physical training. That said, as far as focusing on getting stronger, lifting weights is the best option for BJJ players.

Whether for self-defense or competition, everyone who does BJJ should lift weights. If you compete in BJJ then being strong and athletic will give you an edge over your opponent.

Since you will be competing in a weight class you will want to be as muscular and lean as you can naturally get. Carrying around an extra 20 lbs of fat is not going to help you in a BJJ competition with a weight class.

To get a physical edge over your opponent you would want to maintain as much of your muscle as possible while losing that extra 20 lbs of fat. This way you can compete in a lower-weight class.

If you do this then it is more likely that you will be the more physically athletic competitor. If you then choose to go up in weight, I would suggest trying to stay pretty lean while adding some muscle to your frame.

How Much Muscle Should You Gain For BJJ

Of course, if you are a natural athlete, there is going to be a point where it is difficult to add a significant amount of extra muscle to your body. This would indicate that you are now probably at the best ideal weight class for your frame.

To maintain or gain muscle for a BJJ, you are going to want to focus on getting stronger at the key compound exercises such as bench, rows, weighted pull-ups,  squats ( back and front squats), deadlifts, and overhead presses.

Those are just some examples but you can choose other exercises as well that mimic these movements such as machine exercises. Of course, developing a whole strength and conditioning plan for BJJ training is a bit more complicated than this or anything I could go deep enough into with this post.

However, I would suggest starting out by watching a free youtube series from Juggernaut training systems called Strength and Conditioning from BJJ.

This will give you a great base understanding of how to develop a strength and conditioning program for BJJ.

If size and strength didn’t matter in jiu-jitsu then there would be no need for weight classes. However, athletic performance and strength are some of the most important factors for BJJ competitors.

You have probably heard it said many times that BJJ is a martial art that allows a smaller weaker person to defeat a larger and stronger unskilled person.

Well, this is certainly true to a very large degree just as it is with many martial arts. However, the hidden word is that they can defeat a stronger unskilled person.

However, what then would happen if the stronger and bigger person was more skilled, equally skilled, or perhaps even slightly less skilled. Well, the truth is that size and strength go a long way in combat sports and martial arts and you would likely be in a losing battle.

In addition, there is a point where someone might be so much stronger and bigger than a jiu-jitsu fighter that their skills can’t overcome the sheer size and strength of a person.

A good example of this is something that has been trending on youtube recently. That is where a handful of professional strongmen are trying out BJJ for the first time.

For those who don’t know strongman is a sport where people compete in events such as the world’s strongest man and other strongman sports to see who is the strongest person on the planet. Many of these BJJ black belts are simply unable to do anything to these strongmen.

Of course, this is an extreme example seeing as how one of the strongmen who comes to mind, that is Hafthor Bjornsson, is six foot nine and weighs anywhere from 400-450 lbs.

When he is closer to 400 lbs that just means he is pretty lean. He also currently holds the world deadlift record at 1105 lbs.

So yes this is obviously an extreme example but as you could assume he would stand no chance against a black belt if it wasn’t for weightlifting ( and of course amazing genetics and some secret sauce).

In addition, with most of these examples online, the BJJ black belt is average-sized or below-average size. If the BJJ black belt was perhaps 250 lbs instead of 160 lbs ( still a 200-250 lbs difference) they might have been able to use their skills more effectively on such a large person. The point is that size and strength do matter in BJJ.

BJJ and Weight Lifting Complement Each Other

Don’t get me wrong, if you are a smaller man or woman looking for a way to protect yourself then learning BJJ is of course a great thing to do.

That being said, I do think that over-exaggerating certain claims can do more harm than good. You want people to feel confident but you don’t want to give someone a false sense of security either.

The best thing you can do is to try and avoid physical confrontations at all costs. That said if you are in a situation where you have to protect yourself then knowing how to defend yourself can be life-saving.

BJJ can help you in defending yourself against someone who is bigger and stronger than you up to a certain point. If you are skilled it can help you overcome a pretty large size and strength difference.

But just know that someone who is very big and strong is still a very dangerous person.

The best way to increase your chances of being able to defend yourself is to learn and practice self-defense and to become as physically strong and athletic as possible.

Unfortunately, we do not all have the genetics to be 6’5 250lbs of muscle. But that does not mean you cannot become stronger and more skilled than you are today.

The more skilled and physically athletic you become the larger amount of people you will be able to defend yourself against.

There is always going to be someone bigger and stronger than you, as well as better trained in martial arts. So don’t let this fact hold you back from becoming more skilled and as strong as you can.

For these reasons everyone who does BJJ should also lift weights.

Luta Livre and BJJ have a rivalry that goes way back. After all, these two Brazilian grappling arts started to develop around the same time. So obviously one of them had to arise as the superior...