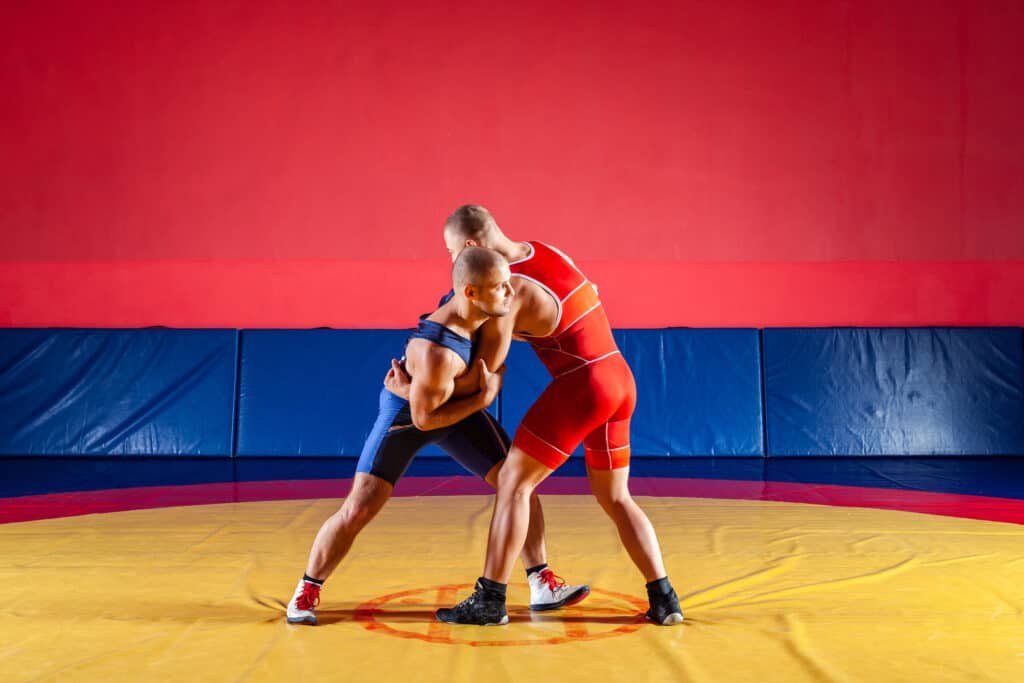 There has been a long debate about which grappling art is the best for MMA. The typical argument is that BJJ has better submissions and that wrestling is better for takedowns and ring control. Many people simply assume that wrestlers are taught submissions but this is not always the case. This brings up a question I hear all the time: Does wrestling have submissions?

So if you are looking to find a wrestling style that teaches submissions you will probably want to look into a style such as catch wrestling. Of course, there are many other ways around this as well. There is no reason that you cannot learn multiple styles of grappling such as freestyle and BJJ.

In my opinion, you should study all of the styles to some degree if you want to be a better grappler. Both BJJ and catch wrestling have great submissions so there is no reason not to learn the best submissions from each art.

Why Catch Wrestling Is the Best Wrestling Style For Submissions

If you want to learn a wrestling style that incorporates submissions then I would suggest looking into Catch wrestling. The only potential issue with catch wrestling is that it can be hard to find a place to learn. Unfortunately, not too many places have a qualified catch wrestling instructor.

If you can however find a good school then catch wrestling can be an amazing grappling art to learn. In fact, this style of wrestling has it all. It has great takedowns, control, and yes submissions. In fact, many no-gi grapplers are turning to learn some catch wrestling submissions to help their game.

It utilized pain much more than BJJ does. For example, it does not use as many choking submissions as BJJ. Instead, they put a lot of focus on neck cranks, heel hooks, toe holds, and spine locks. Many of these submissions might get people pretty mad if you tried them at a BJJ academy.

Personally, however, I believe if you want to become a better submission grappler then you should learn the best submissions from all the grappling styles. Chances are that you are not going to find a catch wrestling school in your area.

However, don’t let this hold you back. You could still go somewhere else like a BJJ academy to learn some great submissions. Then you can spend time practicing your wrestling stand up and put it all together to become a better overall grappler.

In addition, you can find some great Catch wrestling instructionals online if you want to learn some of the submissions from this nearly forgotten art. A good place to start would be to check out Scientific Wrestling Online.

Does Folkstyle Wrestling Have Submissions?

Though it does not contain submissions, it will help you develop other parts of your grappling game. You will learn stand up grappling skills by developing your takedown game. This is something that is neglected at some BJJ academies. In addition, folkstyle wrestling will help you learn how to control your opponent.

Mix this with some solid submissions and ground game from BJJ and you will become a well-rounded grappler. In fact, I think this is one of the best grappling combos you can do. The best part is that if you are still in school you can learn this great style for free. Then you can take these skills and incorporate them into MMA, BJJ, submission wrestling, or freestyle wrestling.

Does Freestyle Wrestling Have Submissions?

So like folkstyle, they removed the submissions and added a points system. In catch wrestling, you had to win either by pin or submission. You can still win a freestyle wrestling match via pin but not through submission. Instead, you must either win by pinning your opponent or scoring more points than your opponent.

That said if you have access to a place that teaches freestyle wrestling I would still highly suggest it. This is the style of wrestling that many MMA fights have a background in. Of course, that is also true for the other wrestling styles as well.

Mixed with other grappling arts like BJJ, freestyle wrestling can help you become a great well-rounded grappler. These skills can be taken to the Olympics or incorporated into your MMA or submission grappling competitions.

Does Greco-Roman Wrestling Have Submissions?

Again sorry to disappoint but Greco-Roman wrestling also does not contain submissions. Instead, it is a grappling style that incorporates takedowns and pins much like freestyle wrestling but all takedowns are performed from above the waist. So you won’t see anyone doing a double-leg takedown in Greco-Roman.

That said, this too is another great style to learn. Some would even argue that it is the best style for MMA because you start at a much more upright position. This would be much more similar to the stance you would take in an MMA fight. It also incorporates a lot of clinching that would come in handy for MMA as well.

I do see their point, however, in my opinion, a mixed style would be the best style to learn for MMA. Greco-Roman wrestlers do seem to do very well in MMA. So I do think it is a style that you should learn from. That said, Greco-Roman wrestling does not have submission so you will have to learn those elsewhere.

What About Submission Wrestling?

This in my opinion is the future of grappling. I think it will go through the same evolutionary process that MMA did. After all, when MMA first started most fighters only had a background in one style of martial arts.

Today every notable MMA fighter that I can think of trains in multiple styles of martial arts. They simply take what is effective and develop their own style out of it. Of course, many of them still specialize but they are at least somewhat well rounded.

This is what probably will and should happen with grappling. Take the best takedowns and submissions from all of the grappling arts to become a better grappler or MMA fighter.

If you are looking to learn submissions to become a better grappler or MMA fighter then I suggest learning from multiple styles. Learn the best takedowns and submissions from every style. That said, you do have to start somewhere.

You probably can’t find a catch wrestling school in your area so your best to learn submissions is probably through Brazilian jiu-jitsu. If you have the opportunity to learn folkstyle or freestyle on top of that then combined with your BJJ you will become a pretty solid grappler.

If you are still in school then you should definitely take advantage of a free wrestling program. They might not teach you submissions but you will greatly improve your takedowns and control. Then if you can BJJ after school you are well on your way to becoming a great submission grappler.