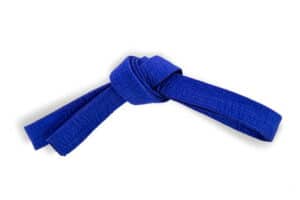 After putting on a fresh white belt on your first day of class one of the first questions that might pop up in your head is how fast can you become a BJJ blue belt. Since the blue belt is the first belt promotion from the white belt people often want to try and get their blue belts as fast as possible.

The fastest you could become a blue belt is about 6 months though this is very rare. About 1-3 years is typically the amount of time it takes most people to get their blue belts in BJJ. That said, the more and smarter you train the faster you can become a BJJ blue belt.

Perhaps you wish you could just skip the whole white belt phase and jump straight to blue belt. After all, going from white belt to blue belt can be a frustrating process.

Of course, it does not need to be. It would be better, of course, to go with the flow and enjoy the process. That said, it is normal to wonder how fast you can become a blue belt.

How Long Does Take To Become A BJJ Blue Belt

Most people will likely get their blue belt around the two-year mark. That said, it really depends on many different factors. Such as how often you are practicing and the academy that you attend.

The important thing is to enjoy the process of learning BJJ. At the end of the day, jiu-jitsu is a martial art that you never stop learning. So it is better to think about how fast you can improve at BJJ, instead of how fast you can get your blue belt.

Sure it is gratifying to get a good understanding of your progress, but as long as you are putting in the time you will get there. If fact, by simply focusing on getting better you will also likely get your blue belt faster as well.

That and simply enjoying the process of learning BJJ is what will get you to a blue belt and beyond. After all, half the battle is simply showing up.

That said, I don’t think there is anything wrong with having goals of becoming a blue belt faster. That is as long as you do not get too wrapped up in the color of your belt.

With that in mind, we can still explore some ways to become a blue belt fast.

I just want to say again that there are many variables to becoming a blue belt. For example, you may go to an academy where the professor is very strict about promoting belts.

On the other hand, your teacher might hand out belts simply because you came to a certain number of classes regardless of your skills.

Or perhaps you had to move and switch academies after a year and a half of training and you had to start with a new teacher who does not know you yet.

There are a ton of other factors that play a role as well. If you were a wrestler all through high school and college, then you will probably jump to blue belt much faster than everyone else.

Or perhaps you have a background in judo and already know some excellent throws and basic submissions. The point is even if you start class on the same day as someone else they still might have some insight into the BJJ that you don’t. Heck even starting out in great shape can give someone a head start.

How To Get Your Blue Belt Fast

I’m going to assume that you have zero martial arts background and are starting from scratch. I do not promise that following these tips will get you a blue belt in less than a year or anything like that.

They are simply some tips that might help you get to blue belt faster. Or in other words, these are the things I would do if I was trying to get my blue Belt as fast as possible.

Putting In The Mat Time Fastest Route To Blue Belt

There is nothing more important to getting to blue belt faster than simply putting in the hours at your BJJ academy. After all, these tips are not about getting a blue-colored belt. They are about fast-tracking the process of learning the skills required to become a blue belt.

The fastest way to learn is to simply put the time in the gym and training as much as you can. After all, a person who goes to class 4 times per week put in twice the training hours as someone who can only make it to class twice per week.

Of course, I understand that we all have different lives. If you are young and single with no kids then you might be able to go to class every day. On the other hand, you might run a business and have a wife and kids at home and can only train a few times per week.

Just Train Jiu Jitsu As Much As You Can

There is nothing wrong with that of course. After all, with the exception of a few people, BJJ will probably not put food on the table. So it makes sense if BJJ cannot be your number one priority.

In that case, it is just something you will need to be ok with. Just keep showing up and you will get there. Persistence and consistency are the keys.

So if you really can only train a few times per week, try not to compare your progress with someone who can train every day. Of course, if you are crunched for time, don’t worry there is still something you can do to help speed up the process. This brings me to tip number two.

Ask What You Need To Learn To Become a Blue Belt

Once you start training on a regular basis ask your professor what requirements they are looking for before promoting their white belts to blue belts. Different professors might have different answers to this question.

Some might have a focus on self-defense and some might not care about self-defense at all. Though you should focus more on simply getting better, it is still good to know what they are looking for.

Ask them where you might be able to improve as well as what they are looking for to promote a student to a blue belt. Some schools even have cheat sheets on what they will go over in the belt test. Of course, what you should focus on is improving your skills rather than simply trying to hack a cheat sheet.

That said, as a white belt, it can be hard to know which skills you should be focusing on in the first place. At the end of the day, they want to know that you have a base-level understanding of BJJ. Which of course is what you truly need to master to become a blue belt.

You need to understand the basics of how to stand. As well as focusing on learning the very most basic yet effective takedowns and sweeps. BJJ Fanatics instructionals that do not cover these kinds of fundamentals are probably not right for you at this moment.

Don’t try and learn everything in the world if you want a quick promotion. Instead, focus on mastering a few basic things from each position.

Though this might not be an option for everyone, investing in private lessons can certainly help you develop your skills at a faster pace.

Getting private lessons was one of the best decisions I made to help me get a better understanding of the fundamentals of BJJ.

During class, your teacher is trying to keep up with a large number of students. So understandably they do not have the time to give each student their undivided attention. Having someone work with you one on one is a great way to learn faster and iron out your weaknesses.

You do not have to be in class to enhance your BJJ knowledge. Of course, training in class under a good teacher is superior to learning BJJ at home by yourself.

That said, you might not be able to make it to as many classes as you would like. In addition, you probably have some free time at home that you might usually spend watching tv or scrolling through social media.

In today’s world, there are a ton of resources online to help you learn BJJ faster. Reading blogs like this is a great example. There are also great free youtube instructionals as well as digital products that you can purchase.

These are great resources and can help you learn BJJ at a much faster pace. That said, since you are a white belt don’t buy instructionals on fancy leg locks or other advanced techniques. Instead, focus on the beginner and fundamental BJJ instructionals.

Outside of watching and learning from BJJ instructionals, it is also great to simply watch some free BJJ competitions online. There are so many free fights online with the best competitors in the world.

Simply start watching some of the major BJJ competitions like you would any other sport. You will be surprised how much you will learn by simply watching the best in the world compete.

Compete In Tournaments To Fast Track Your Blue Belt

Of course, if you just started BJJ you might want to wait a little while before you start competing. That said, once you are ready there is no better place to test your skills than in real competition.

Not only will you get a better idea of how you are doing, but this also gives your teacher a chance to know how you are doing as well. Of course, they are probably watching you in class as well but remember that they also have tens if not hundreds of other students to keep up with.

Whether right or wrong your professor will likely naturally keep a better eye on the students that are competing. This will often happen naturally even if it is not intentional. Winning a competition at white belt is a good indication you might be ready to become a blue belt.

Forget About How Long It Takes To Get Your Blue Belt

The last tip I want to leave with you is this. Don’t worry about how long it will take you to become a blue belt in BJJ. Instead, enjoy the process at all stages of your BJJ journey. Of course, you should use these tips to improve your jiu-jitsu as much as you can.

That said, worry more about improving every day rather than what color belt you have. It will go by faster if you do and before you know it you will earn your BJJ blue belt.