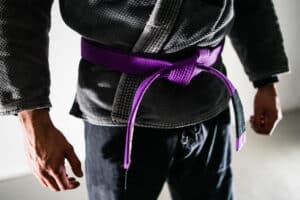 Getting a purple belt in BJJ is not an easy task. In fact, I would guess that less than 10% of white belts actually make it to the purple belt level. The purple belt is right in the middle of the white and black belt.

It comes directly after the blue belt and right before the brown belt in BJJ. That said, it is the belt most people see as moving past the beginner level in jiu-jitsu.

Why Does It Take So Long To Get A BJJ Purple Belt?

There are many martial arts where you can get to the black belt level in 2-3 years. In BJJ however, it usually takes about 10 years or even more to reach a black belt level. So in many ways, it can take longer to achieve purple belt status in BJJ than a black belt in other art forms.

They know that people don’t want to put in the years it takes to get a black belt in BJJ. So if they can promise quick results they can get more students.

With that in mind, reaching the purple belt level in BJJ truly is an accomplishment that you should be proud of. After all, a small percentage of people will ever even make it to purple belt.

It took me almost 5 years of persistent training to become a BJJ purple belt. The first year I only practiced no-gi before switching schools which probably slowed down my belt progression a little bit.

For the average person, it usually takes about 2-3 years of training to go from white to blue belt in BJJ. Then it often takes another 2-3 years after a blue belt to get to the purple belt level.

For the most part, it takes 2-3 years at each belt level from white to black. Some are a little faster and some a little slower. So if you want to become a purple belt quickly then you need to be spending two years or less at white and blue belt.

Moving from white to blue belt is often the biggest hurdle for many people and most who start BJJ never get there. After that people often get the blue belt blues. This is when BJJ is not as new and exciting and are tempted to quit.

How Hard Is It To Get A Purple Belt In BJJ

It is very hard to get to purple belt in BJJ and most people will quit before getting there. The main reason so few people make it to purple belt is simply the time and dedication it takes to reach this level.

As mentioned, it takes some people over 6 years to reach purple belt in BJJ. There are many things that can get in the way of you achieving your purple belt. Let’s look at some of the most common reasons.

It is easy to watch MMA on the couch and decide that you want to learn some of the cool submissions from BJJ. Of course, you might not realize that much of becoming better at BJJ is from repetitive drilling and practice.

Don’t get me wrong it is good to spend timre rolling but you still need to practice the more repetitive drills to truly master them. After joining a class you might realize that drilling technique takes time and patience to master.

It really is not too different than someone who goes into a gym and expects to look like Arnold Schwarzenegger in his prime after lifting weights for two months.

When in reality only one in a hundred thousand people (probably less) even have the genetics to ever reach his level. Not to mention the hard work and “supplements” involved to look that way.

My point is that it is easy to want to be amazing at BJJ. In fact, being able to defend yourself or feeling confident in your physical abilities is buried in our DNA and is a very natural way to feel.

That said, putting in the time to get a purple belt in BJJ takes more work than most people are willing to put in.

Getting A Purple Belt Takes Persistence And Commitment

Many people start doing jiu-jitsu when they are younger and do not have as many commitments in life. However, after some time life will start to get in the way. This can take form in many different ways.

Perhaps you start a romantic relationship that you care about. Or maybe you get a job promotion that will take up more of your time.

Those are really just a few small things that might interfere with practicing BJJ. Some things take up even more time such as starting a family or starting your own business.

These things can cause stress and force you to prioritize your time. Unfortunately, many people decide that they do not have time for jiu-jitsu and drop it altogether.

Many people have an all-in or all-out mentality. They might think well if I can’t train like I did when I was younger why train at all. Don’t get me wrong I understand things will get in the way of training that might be more important to you than jiu-jitsu.

However, there are probably other things in your life you can give up to attend at least a couple of classes per week. At the end of the day, you will eventually get to purple belt even if you can only train a few times per week if you stay persistent.

Injuries will happen when training jiu-jitsu. With any sport, you will probably start to feel a couple of aches and pains from constant training. This can be hard for some people to deal with. After all, it is not fun to be in pain or to suffer injuries.

Many people simply do not love jiu-jitsu enough to deal with this. Of course, are some things you can do to help prevent this if you really want to. Some schools are more well-known for super hard rolling and injuries are more likely to happen in this environment.

If you are prone to injuries you might simply tell your training partners that you are rolling light that day. If you do have a particular injury you might also let them know before you start rolling. You might also simply need to take more rest days than you did when you were younger and let your body heal.

For some people, you might simply need to let go of your ego and tap out when you need to. I’m sure most people who do not want injuries are less likely to have this problem. That said, it still could be a factor leading to more injuries than necessary.

Don’t Let Injuries Get In The Way

In addition, having a great strength training regime can also help prevent injuries in BJJ. More muscle will help you to protect your ligaments and joints and prevent many other injuries as well. A good strength training program should incorporate compound lifts as well as corrective exercises, particularly for BJJ practitioners.

Unfortannaly however, some injuries are more serious than others and might cause you to spend an extended amount of time out of the gym. Sadly, many people never make it back to class after a serious injury.

How To Become A Purple Belt Faster

In the article, there are a few tips you can follow to become a blue belt faster. Worry about getting the first belt you need to before worrying about getting a purple belt.

If you are already a blue belt then you will want to focus on developing the skills to go from blue to purple. This can vary from school to school so its bet to talk to your professor.

Putting In The Mat Time Fastest Route To Purple Belt

There is nothing more important to getting to purple faster than simply putting in the hours at your jiu-jitsu academy. After all, these tips are not about getting a purple-colored belt. They’re about fast-tracking the process of learning the skills required to become a purple belt in BJJ.

The fastest way to get your purple belt is to simply put the time in the gym and training as much as you can. After all, a person who goes to class 4 times per week put in twice the training hours as someone who can only make it to class twice per week.

Just Train BJJ As Much As You Can

In that case, it is just something you will need to be ok with. Just keep showing up and you will get there. As I mentioned earlier, persistence and consistency are the keys.

So if you really can only train a few times per week, try not to compare your progress with someone who can train every day. That said, you also need to train smarter as well. If showing up is half the battle, then knowing what you need to focus on is the other half.

Ask Your Professor What It Takes To Become A Purple Belt

The first thing you should know is what your professor is looking for in a purple belt. The best way to do this is to simply ask them.

Next, you will simply want to make sure you are putting in as much time in the gym as you can. If you are crunched for time and are financially able, you might consider doing private lessons once per week. Or even once or twice per month if that is more realistic.

Private lessons can truly help someone develop the jiu-jitsu game at a much faster pace. Your teacher will likely be able to point out some of the weaknesses that are holding you back from the knowledge you need to understand to become a purple belt in BJJ.

People who take the time to study BJJ outside of class time typically become purple belts faster. This is of course in addition to your time in class.

What I meant is watching BJJ information online when you have some free time. In addition, you might purchase a course or two that covers some of the areas you might be lacking in. The most popular place to find BJJ instructionals online is through BJJfantatics.com.

That said if you are new to BJJ you want to focus on the basics first. So get an instructional that is geared towards white belts and beginners. You can check out my top options for white belts here.

Lastly, you might consider testing your skills through competition as much as you can. This will help you and your professor identify how well you are progressing in BJJ. Nothing test your skills better than putting them up against an equal belt.