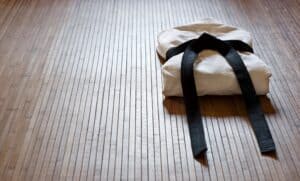 The thing you must understand, however, that reaching a black belt in judo is just the beginning. The first black belt “Shodan” translates to the beginning step. So even by reaching the black belt in judo, you are only just in the first steps of your journey. For this reason, it is probably best not to worry about how long it will take to get a certain colored belt around your waist.

But the amount of time it takes to get a black belt is not a good enough reason to choose a certain martial art over the other. That said, I understand that you simply might be curious how long it takes, and that is totally understandable. I also understand that some people are just competitive and want to try and reach black belt as quickly as possible.

The modern martial arts belt system was actually created by  Kano Jigoro the founder of judo. Before Kano martial arts systems did not use colored belts for ranking students. Though today’s judo ranking system has changed since it was originally developed by Kano Jigoro it is still based on his principles.

In addition, the judo belt system is not exactly the same in every country around the world. That said, they mostly follow a pretty similar system. There are the Kyu Belts ( student belts ) and the Dan ( master belts ). Students will move through a series of Kyu belts until they reach first Dan, which is the first level of black belt in judo. Then you can get promoted second Dan then third done all the way up to tenth Dan. Ninth and tenth Dan judokas will sometimes have red belts instead of black belts.

This is just one example, but the belt system is a little bit different from country to country. That said after you reach the black belt it is pretty much the same. The only small difference is that some will continue to wear the black all the way up to 9th and 10th Dan instead of red/white and red belts.

How To Become A Judo Black Belt Fast

Like I have already said it really is not about how fast you get your black belt. Of course, we are human so it is certainly something that is natural to wonder. That said, there are some things you can do that will likely help you reach black belt in judo faster. The real problem is when people start to compare their progress to others. After all, we are all in different stages of our lives.

If you have a family and operate your own business, then you might not have the same amount of time to dedicate to judo as a single 19-year-old. At the end of the day, we have to set our own priorities and we should not compare ourselves to others. We should instead simply strive to do the best we can without making excuses for ourselves.

With that in mind, the single biggest thing you can do to become a judo black belt more quickly is to go to class consistently. This might be 2 days per week or 5 days per week depending on your schedule and priorities. The main thing is to be consistent with as many days as you can. Where people often really drop the ball is by skipping weeks or even months of training at a time.

It is equally important that you are fully focused and present while you are in class. If you are the type of person who can’t make it to class as often as you would like there are still things you might be able to do. Though not all of these options will apply to everyone, hopefully, there at least one of them will help you to learn at a faster pace.

Obviously, not everyone in the world can afford to invest in private lessons. But for some people, money is not really as much of an issue as finding the time to go to class. Perhaps you are a successful business owner who works 50 hours a week with a family at home. If this is the case you might be able to afford to do a weekly private lesson that might even fit your schedule better.

For some people, it is hard to make it to class due to scheduling complications. As someone who used to work from 11 am to 9 pm I can attest to this. Most martial arts classes take place at either lunchtime or during the evening around 6-7 pm. This can make it hard for people who work during these times. It is also hard for people who have families to make it to class consistently.

That said, if you can afford private lessons, I do believe they are worth every penny. With the one-on-one training, you can probably pick up the same amount of knowledge as you would from multiple classes. Of course, this is not a replacement for classes, but it can help if you are stretched for time. I would say that if you can make it to 2 classes per week with one private lesson you can probably keep pace with someone going to class 5 days per week.

However, as previously stated I understand that this is simply not financially realistic for many or perhaps even most people reading this. That said, it also does not have to be once per week. Even if you could afford one per month or once per quarter, they can certainly help you out.

Once per month might not seem like it would help very much, however, it can really give your Sensei a chance to see where you are at.  This can be crucial for helping you iron out any of your weak points and help you to quickly identify what you need to work on.

Obviously, learning at home is also not an excuse not to come to class. I am also not saying that you can learn judo at home without also going to a class on a regular basis. What I am saying is that even if a short on time there are probably areas in life you can cut back on. Even if it is simply watching judo matches on YouTube 15 minutes a day. Or watching YouTube videos on executing certain techniques.

Of course, this can never replace the learning that comes from direct training. But It can certainly help you to keep techniques fresh in your mind. You can also invest in online digital courses that can help you to learn faster. You can buy courses taught by some of the best judokas in the world.

A good example would be the Judo Basics by Shintaro Higashi or The Judo Academy by Jimmy Pedro and Travis Stevens. There are also a ton of instructionals you can find at judofanatics.com.

I have written in more depth on this subject in my article: Can You Learn Judo At Home! I would recommend checking it out if that is something you are interested in.

Another thing you can do to help you become a black belt in judo faster is by competing. When you compete you are actually putting your knowledge to the test. It will help expose your weakness and also help your Sensei see how you are doing. This does not mean you need to try and become an Olympic champion, but competition will help you improve faster.

For most people, it takes about 4-6 years to become a black belt in judo. That said, don’t let your mind get too focused on how long it will take. Instead, just focus on improving a little bit each day. Trust me, your life will go by either way and before you know it you will become a judo black belt. That is at least if you don’t give up and you keep training.

That said, getting your judo black belt is only the new beginning of your journey. The most important thing is to go to class consistently and give it your all when you are training. There are some things you can do to help you improve faster. Outside of going to class, I would suggest doing some private lessons. That is of course if you in a place in life where this is financially realistic.

Otherwise, just do what you can to learn a little bit every day. That might be by watching judo matches when you get some free time. Or perhaps watching some YouTube videos or investing in digital courses that you can watch at home. Just remember that this cannot replace time on the mat. But it might help you to improve just a little bit faster.