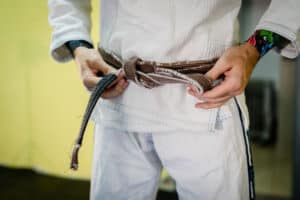 Most people who train BJJ regularly will likely get their brown belt after 6-9 years of training. Of course, some will receive their brown belts a bit sooner and for some, it will take more than 9 years. Either way, it takes a good amount of time to become a brown belt in BJJ.

This is not a knock on other martial arts by the way. It is simply that there are different ranking practices in the different styles of martial arts. That said, a BJJ brown belt requires many years of training to receive. It is the fourth belt in the BJJ belt system as well a the belt before becoming a black belt.

Why Do So Few People Make It To Brown Belt In BJJ?

There are many reasons that most people do not make it to brown belt. After all, it takes years of practice to become a brown belt in BJJ. As previously stated it will take you at least 6 years or more unless you are extremely dedicated and also gifted. For many people, it will take 6 years just to get their purple belt and some will still be at blue belt.

After all, how many people do you know that will stick to any craft for that long? That said, it is not simply the time it will take that holds most back. It’s the amount of hard work you have to put into that time that is the hard part. This brings me to my first reason.

There is more to becoming a brown belt than simply the time it takes. It has more to do with the amount of work you have to put in during that time. Much of BJJ is extremely enjoyable such as rolling. However, much of perfecting any craft is repetitive drilling of the same techniques over and over.

Don’t get me wrong, drilling techniques can be enjoyable for some people. However, I’m sure if you make it all the way to brown belt there will be times where all the repetitions might wear you out a bit. It can be easy to look at the path to brown belt with rose-colored glasses, but mastery of any craft has its dark days.

This is not by any means to say that the journey to mastery in BJJ will not be worthwhile. On the contrary, I’m suggesting that any journey worth taking will not come easy. There are many other obstacles that will get in your way along the way.

Another common reason most people will not make it to brown belt is because of injuries.  This could range anywhere from some minor aches and pains all the way to serious injuries. Some sort of injury is likely to happen in any sport or martial art.

Hopefully, you will never suffer a debilitating injury but surely you won’t make it through years of a sport without a few scrapes or bruises. These things can be hard for many people to handle. Because of this many people decide that sticking through with BJJ is not worth the risk of injury.

Of course, there are some things you can do to minimize your risk of injury in BJJ. The first is to get a good warm-up before class. Going into class with cold stiff muscles is not the best idea. Some experts disagree on whether static stretching before athletics is good or bad.

However, most people will agree that a dynamic warm-up of different kinds of movement is a good idea. It might also be a good idea to take it easy on your first roll of the day. This is especially true if rolling is all that you are doing that day. The point is to try and not to go from zero to a hundred and let your body warm-up. This alone will prevent many unneeded injuries.

The next thing to consider is to never let your ego get in the way. Don’t be too stubborn to tap when you are in a vulnerable position. Of course, it is easy to say you would not ever do that. That is until the new white belt somehow gets you in an armbar. Then your ego might say otherwise.

Additionally, when you do have an injury do yourself a favor and actually let it heal. You might feel like you are giving up tons of training time by letting certain injuries heal. However, you will often save your self even more time in the future by simply listening to your body when you need to.

Lastly, having a good strength training program can also help prevent certain injuries. Having a good amount of muscle can help protect your joints and ligaments. Choose a good program that includes compound lifts as well as corrective exercises for BJJ. In addition, make sure to strengthen vulnerable parts of your body such as your neck muscles.

The last reason but also probably the most common reason people don’t make it to brown belt is that life gets busy. I can attest to this myself. In fact, I actually originally started BJJ a very long time ago for about 6 months or so. Then I had to take some time off to deal with some things in my personal life.

That time off ended up amounting to about 8 or 9 years before I ever stepped foot back into a BJJ gym. I often think about how much experience I would have now if I had stuck with it. However, what happened happened and I can’t go back in time.

It is easy to say you are going to do BJJ forever when you are a young single person without any commitments. However, at some point life will get busy and it will challenge your commitment to jiu-jitsu. Understandably jiu-jitsu might have to take a back seat to bigger priorities such as family or career.

This does not however mean that you have to quit jiu-jitsu because life gets busy. You simply might have to cut back the amount of time you can train.  Sure you might have to take some time off at certain points in your life. That said, I can attest that the longer of a break you take from anything the harder it will be to get back into it. All too often, many people never make it back.

Getting a brown belt in BJJ takes a lot of work. Most people will become brown belts in BJJ after about 6-9 years of consistent training. That said, there are many obstacles to face on the way to brown belt. After all, if it was easy then more people would make it to brown belt. However, if you are willing and stick to it you will make it.