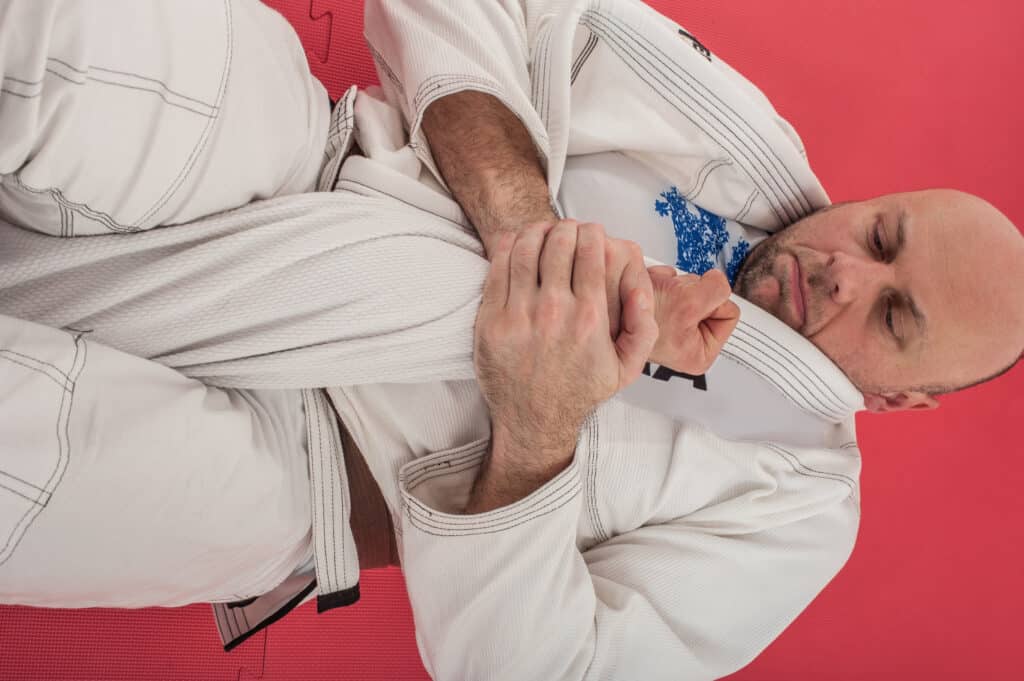 One of the biggest issues that prevent many people from starting jiu-jitsu is the fear that BJJ is bad for your joints. This is completely understandable, after all why learn how to protect yourself if you are just going to mess up your joints in the process? But is this fear founded in truth? Is BJJ actually bad for your joints?

BJJ is pretty hard on your joints. That said, many of the common joint issues and joint injuries in BJJ can be avoided or greatly reduced. Most joint issues from BJJ are from joint locks and damage to the fingers.

Of course, there are many other ways in which you could injure a joint in BJJ. That said, there are some things you can do to help prevent these injures when rolling and competing in Brazilian jiu-jitsu.

Why Jiu-Jitsu Is Bad For Your Joints

The most obvious reason that BJJ is bad for your joints is that some of the most common BJJ submissions are joint locks. A good example of this would be the armbar. In fact, the armbar is the number one cause of joint injury in BJJ competitions according to one study.

That said, it should not be too big of a surprise that engaging in a martial art that utilizes joint locks might result in some damage to your joints. Thankfully, there are certain things that you can do to make joint injuries less likely for you to experience.

The Main Causes Of Joint Problems In BJJ

Some of the joint damage from BJJ is from a slow process of putting your joints through certain positions over a long period of time. Think about this as slow and steady damage to your joints. Other times joint damage can come all at once. A good example would be when someone puts you into an armbar and cranks your elbow joint.

This can be hard for many people who are very competitive. I can completely understand this but tapping out to that white belt who somehow got you into an armbar is better than damaging your joints. Refusing to tap could cause you to not be able to roll for some time or even have lasting joint damage.

Of course, I understand that some people are going to refuse to tap in a BJJ competition if they think they have a chance of getting through the submission. I still would recommend avoiding doing this even if it is a very important competition. Personally, I would rather be able to do BJJ for the rest of my life than win a competition.

BJJ and Arthritis Of The Fingers

This is mostly caused by the constant gripping of the BJJ gi. When rolling jiu-jitsu players will grab each other’s gis to either hold them, choke them, pull them, or throw them. On top of that, once you grab your opponent’s gi they are trying their hardest to rip your grips off of their gi.

This can accumulate into some serious finger joint pain and even arthritis. This is simply caused by the constant wear and tear on your fingers over a long period of time. Thankfully, there are some things you can do to reduce the likely hood of developing joint problems in your fingers from BJJ.

How To Help Prevent Joint Issues In Jiu-Jitsu

There are many things you can do to reduce the likely hood of joint problems in BJJ. That said, if you choose to practice BJJ there is certainly going to be a chance of injury. Joint injuries are simply one of many injuries common in BJJ. Though these tips might help, you are taking a risk to your joints by participating in BJJ.

The first thing to talk about is protecting your major joints in BJJ. Or perhaps I should say your bigger joints such as your elbow, shoulder, and knee joint. Here are my top tips for protecting these joints in BJJ.

Protecting Your Fingers In BJJ

Protecting your fingers in BJJ is another topic. Though you could injure a finger joint during a rolling session, what I am talking about here is the wear and tear on the finger joints that happen over time in BJJ. These are my top tips for avoiding these issues.

Supplements BJJ Players Can Take For Thier Joints

Another thing you might consider is taking extra supplements for joint support. The only issue here is that it can be costly and some supplements work better than others. My top supplement for BJJ players would include:

Fish oil would be my number one pick for protection. After that, I would probably suggest getting a joint support supplement such as Jocko Joint Warfare. This product is named after Jocko Willink who is a BJJ black belt. So you know it was developed with BJJ athletes in mind.