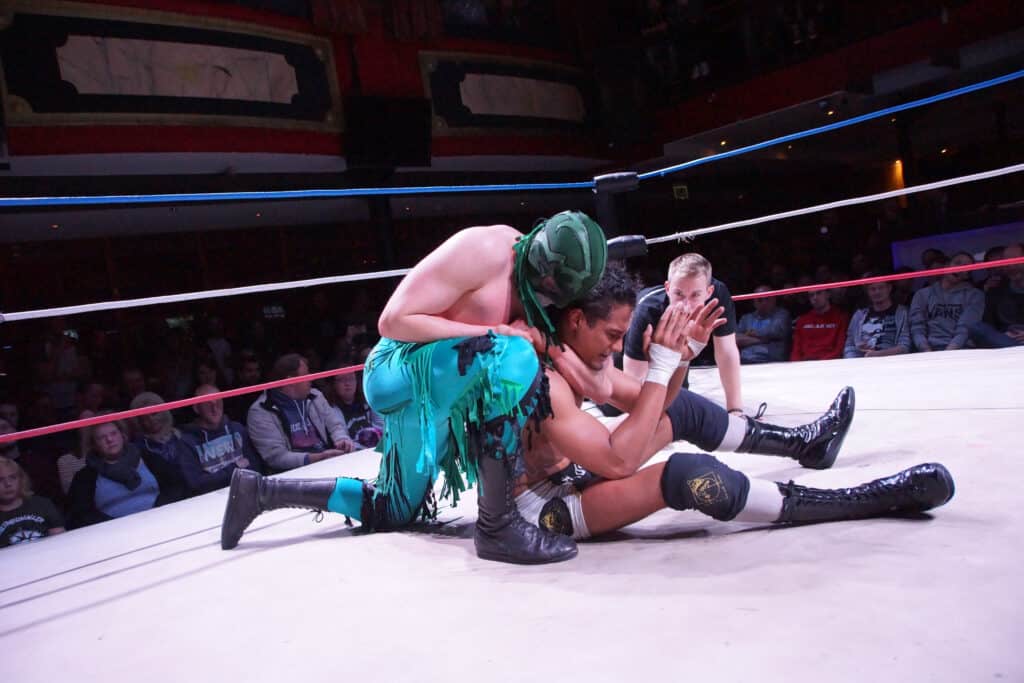 There is a lot that comes to people’s minds when you talk about wrestling. Some people will think about Olympic wrestling whereas others will think of Professional wrestling as you see on WWE. One is a very competitive sport and the other ( though full of talented athletes ) is scripted. But what about catch-wresting, Is catch wrestling scripted?

This is not too different from the rules of professional wrestling. The big difference being that one is scripted and one is not. The reason for the confusion is that pro wrestling is basically a scripted and more exaggerated version of catch wrestling.

Catch wrestling has real legitimate submissions that are very effective. This has been proven many times by people such as Josh Barnett and Kazushi Sakuraba ( also known as the Gracie Hunter) in both competitive submission grappling and in the world of MMA.

In fact, many top grappling today are starting to turn to catch wrestling to improve their submission grappling game. Many of the popular submissions you see today were originally practiced by catch wrestlers. For example, catch wrestlers have been doing leg locks, toe holds, arm locks, neck cranks, and much more for well over a hundred years.

Many of the popular styles of wrestling today evolved from catch wrestling. This would include both folkstyle and freestyle wrestling. In fact, the main reason that these styles were created is that catch wrestling was too brutal to be accepted in American schools or by the general public for the Olympics. So to make them more acceptable they removed the submissions and added a points system.

That said, most if not all of the takedowns found in folkstyle and freestyle wrestling were originally from catch wrestling. So as you can see catch wrestling is a complete and legit grappling art with both amazing submission and takedowns.

Carl Gotch taught many of the pro Japanese wrestlers the art of catch wrestling. One of his students actually hosted one of the first MMA matches where he took on other martial artists to showcase the effectiveness of his wrestling style. Though these MMA bouts were not scripted, he would later go on to form New Japan Pro Wrestling.

That said, though shoot wrestling might be scripted, these shoot wrestlers were actually trained martial arts who could and often did fight in real matches. In fact, shoot wrestling influenced what we might know today as shoot fighting and shooto.

So even though shoot wrestling might be scripted it is based on a real wrestling style. So shoot wrestlers actually do know real submissions and takedowns.

You can still learn real catch wrestling today. Unfortunately however finding a gym that teaches catch wrestling is hard to come by.  You can read more into detail about this in my article: Where and How To Learn Catch Wrestling. But just to keep it short, you should consider yourself very lucky if you can find a legit catch wrestling school near you.

Thankfully, however, this art is kept alive through online resources and a few good schools. For those without a school in their area, they can learn through catch wrestling instructionals and youtube videos. Hopefully, however, catch wrestling will become more and more popular again and we will start to see more coaches and schools open up around the country and around the world.

We also have offshoots of catch wrestling that you can learn today. A good example would be Luta livre which is a popular grappling art from Brazil that was started by a catch wrestler. In fact, Luta livre was and still is to some extent a major rival to BJJ in Brazil. But like catch wrestling it is also hard to come by in most areas of the world.

So if you can’t find a school near you then I certainly think it is worth looking into learning as much as you can from catch wrestling through online resources to help improve your overall grappling game. Learning catch wrestling is one of the best arts that BJJ players and other no-gi submission grapplers can learn to improve their game.