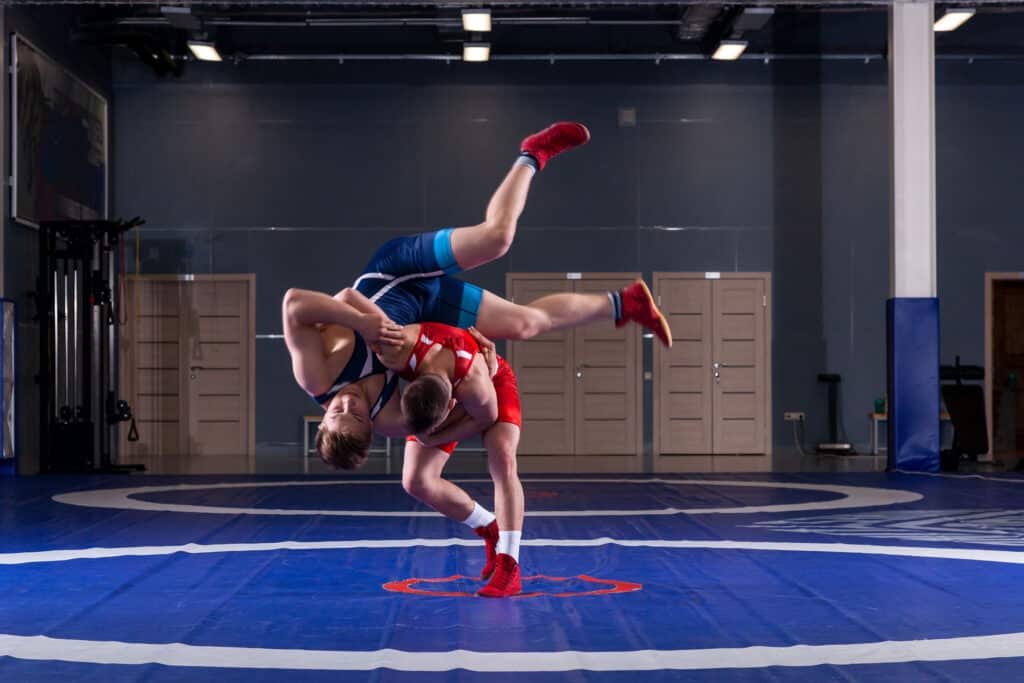 Freestyle wrestling can be dangerous, but wrestlers can easily keep themselves and their opponents safe on the mat with the proper training and supervision. It’s important to note that more powerful techniques are used in this wrestling style, so it’s good to be mindful of this.

In this article, we’ll explore how freestyle wrestling can potentially become dangerous and other factors wrestlers should be mindful of before they hit the mat. If you’re interested in learning more about this topic, keep on reading.

Below, we’ll explore some common techniques within freestyle wrestling that not all other forms of wrestling allow on the mat.

A suplex is a powerful takedown technique that requires a wrestler to slam their opponent down on the mat. This is a widespread move within the freestyle wrestling world, but you won’t find it within folkstyle wrestling for several reasons.

It’s important to note that this move can easily result in injury if not done under proper supervision and proper training beforehand.

It’s already clear to see that many techniques allowed within the world of freestyle wrestling may be deemed as dangerous compared to what folkstyle wrestling allows. With the proper training and knowledge of how to execute these moves, freestyle wrestlers can easily stay safe on the mat.

This technique is key for those looking to master the art of freestyle wrestling. This move is also a great way to make the transition from folkstyle to freestyle wrestling successfully. This offensive move allows wrestlers to score by taking control of their opponent’s head.

It’s important to note that this is a hazardous move for the wrestler in defense, so it’s up to the offensive player to execute this move correctly to keep their opponent safe. While this is a very powerful move, it’s an easy move to get your opponent in if they have their head down long enough.

The offensive move is also a great way to get your opponent into a takedown, which will help you score against them. While you won’t find this effective, offensive move in folkstyle wrestling, it’s a great technique freestyle wrestlers can take advantage of that will help them tremendously on the mat.

This offensive move will score wrestlers a five-point advantage over their opponents, making it highly beneficial during a match. While this is a fundamental move that all freestyle wrestlers learn in time, it can be quite dangerous, so it’s important to be mindful of this.

While bottom offense won’t come in handy much for a folkstyle wrestler, it’s a great tool to learn for freestyle wrestlers for many different reasons. For one, this move ensures that wrestlers learn how to maintain a strong base on the mat.

Why Freestyle Wrestling Can Be Dangerous ( And How To Reduce Risks )

Now that we’ve gone over some of the more powerful offensive moves that freestyle wrestling allows, below we’ll explore some factors freestyle wrestlers should be mindful of before they hit the mat.

Believe it or not, you have a better chance of getting a concussion during a wrestling match than you do on the football field. According to the American Journal of Sports Medicine, a five-year study should show that wrestlers have the highest number of reported concussions than any sport.

While wrestlers and coaches need to be mindful of these statistics, injuries like these can become easily avoidable with the proper training and supervision. Taking the time to remember all these factors will help keep you and your opponent safe and injury-free during both practices and matches.

Wrestling is a heavy contact sport, but you’ll find more aggressive and powerful techniques used in freestyle wrestling. If you’re a parent worried about signing your child up for wrestling, it’s important to note that at a young age, technique and strength are not prioritized during this time.

For young wrestlers just starting, things such as teamwork and enjoying the game are the priority instead of learning aggressive techniques. By the time student-athletes reach middle or high school, that’s when they begin learning more advanced and powerful techniques.

While wrestling is still a heavy contact sport no matter what age range you’re wrestling in, it’s important to note that young wrestlers and their parents don’t have too much to fear when it comes to this sport becoming too aggressive.

That said, folkstyle is not an Olympic sport so you would have to transition to freestyle or Greco-Roman wrestling if you want to compete outside of the States.

Freestyle Wrestling Is Safer With Proper Training and Supervision

While we briefly mentioned this early, it’s important to note that freestyle wrestling is less dangerous when paired with the proper training and supervision from a professional.

While this sport does contain more powerful and aggressive techniques compared to other folkstyle, coaches can keep their wrestlers safe by watching over them at all times and ensuring that wrestlers aren’t pushing themselves or their opponents over their limits.

Most of the injuries we see in wrestling stem from poor ethical tactics and a lack of supervision. Ensuring that everyone is comfortable and injury-free before stepping on the mat will make freestyle wrestling a much less dangerous sport at the end of the day.

While we’ve explored some of the factors that you should be cautious about, there are actually many physical benefits to freestyle wrestling. For one, engaging in this sport is a great way to gain total body awareness, allowing wrestlers to move and control their bodies both on and off the mat.

It’s also a great way to encourage wrestlers, both young and old, to engage in more physical activity, which will educate them further on their own health and fitness. Many coaches also insist that the training wrestlers go through holds numerous benefits that folkstyle wrestling can’t provide.

If you’re looking to become stronger both physically and mentally, freestyle wrestling is such a great tool that will allow you to do that, no matter your skill level.

Continue Reading
link to Does BJJ Work In Real Life? The Truth About BJJ For The Streets