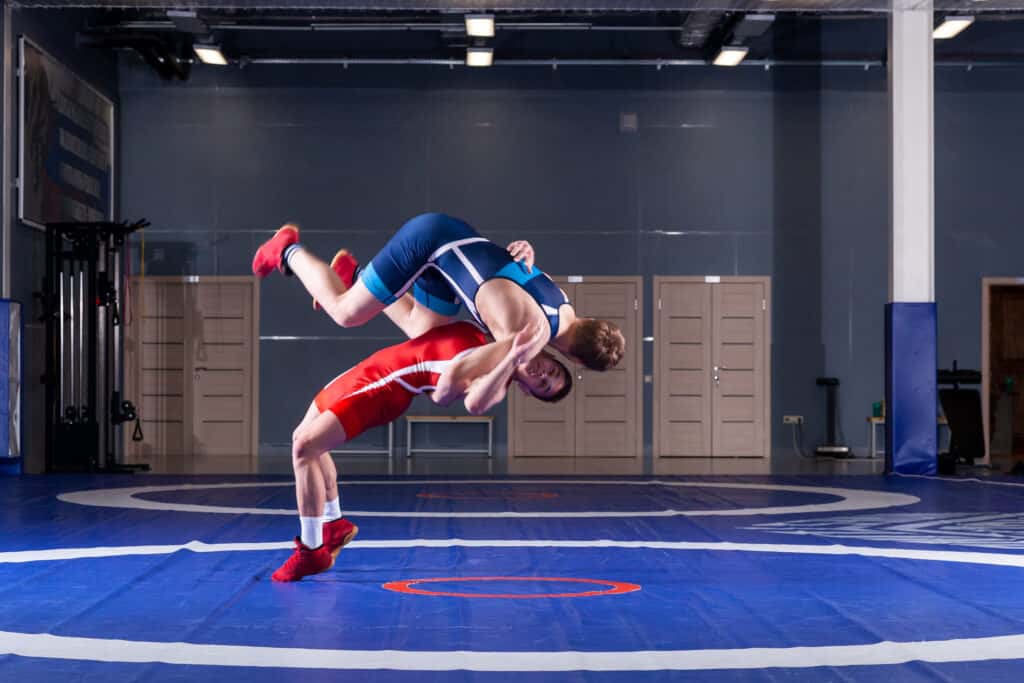 Young people who are interested in wrestling quickly learn about the different popular styles around the world – the three most prevalent being freestyle, folkstyle, and Greco-Roman. One of the biggest concerns with wrestling is the risk of getting injured. In this article, we will answer the question: is Greco Roman wrestling dangerous, and what you can do to reduce your chances of injury.

This article will explore what makes Greco-Roman wrestling dangerous, including explanations of the rules and typical wrestling moves that make this so. We’ll also cover the most common wrestling injuries according to global studies, and we’ve provided tips in wrestling safety. After all, competitive sports, in general, have their risks of injury and wrestling is no exception.

Compared to Freestyle wrestling, one of the significant differences in Greco-Roman wrestling is that you cannot hold the opponent below the beltline. Those who compete in Greco-Roman competitions must focus on the upper body of their opponent, thus, both competitors are more likely to suffer upper-body injuries.

Greco-Roman wrestling matches often include throws and suplexes, two helpful moves according to the Olympics website, as they help get the opponent off balance and in a defensive position.

However, throws involve grabbing part of the opponent’s upper body with two hands and then dragging them to the ground; Similarly, a suplex involves lifting your opponent off the ground and pushing them down onto the mat. Such moves hurt the opponent’s back, shoulders, arms, or head and can strain the aggressor’s upper body.

Physio4Fight, a physiotherapy blog for martial arts and athletics, details some of the most common injuries that wrestlers suffer.

Cauliflower ear is an outer ear deformity brought on by severe damage to the ear. Wrestlers often suffer significant bruising and swelling on the ear during training or matches. A doctor must drain and wrap the ear to ensure it retains shape and heals. Of course, this can often be avoided with the simple use of protective headgear.

The other parts of the body where frequent injuries occur include knees, hands, wrists, shoulders, elbows, ribs, waist, ankles, and neck. Around 69 percent of the Greco-Roman wrestlers in the study had an ear injury, while slightly over 50 percent sustained knee damage.

Only 12 percent of the Greco-Roman wrestlers in the study did not sustain any injuries during the period of monitoring.

One fact from the paper that may surprise wrestling enthusiasts: A vast majority of the injuries tracked by this study occurred during training, not matches. While the study is not representative of every Greco-Roman wrestler worldwide, it suggests that one or more injuries are common among these athletes.

A study published in the Scandinavian Journal of Medicine & Science in Sports analyzed wrestling injuries during the 2006 U.S. National Tournament. E.E. Yard and R.D. Comstock attempted to compare the epidemiology of injuries during Freestyle and Greco-Roman wrestling.

In general, the study suggests Greco-Roman wrestling may be slightly safer than Freestyle wrestling; however, the differing total injury tallies from the two studies suggest that wrestlers in the Turkish study did not take proper precautions during their training sessions. You would also have to take a look at the severity of the injury to truly judge which wrestling style is more dangerous.

Their research also showed that Greco-Roman wrestlers had more frequent elbow, head, face, and neck injuries. Concussions were also more frequent in this form of wrestling. Ultimately, it was concluded that wrestling may not be as dangerous as the Turkish research suggested. Only 4.6 percent of the 3000 wrestlers at the U.S. national Tournament sustained an injury.

So naturally, they are going to try and make this sport a little bit safer for their students. This is to not only protect the kids but also to help get their parents on board as well. Of course, even folkstyle wrestling can be dangerous just like many other school sports.

At the end of the day, you can not avoid the risk of injury completely in the world of competitive sports. But if you or your child is interested in wrestling and want to pick the safest style, then going with folkstyle wrestling is probably your best bet.

Any up-and-coming wrestler wants to stay healthy for as long as possible. Being fit means continuing to train and improve your skills while having the chance to play in more matches.

Below are a few strategies you can use to prevent a few common wrestling injuries, per the University of Pittsburgh Medical Center HealthBeat.

Rothman Orthopaedics also recommends that wrestlers focus on shoulder strength and flexibility training. Proper warm-up before training and competition also helps to avoid injuries to your shoulder due to holds or arm twists.

A proper warm-up also helps to prevent ankle injuries. If a wrestler does suffer an ankle sprain, they must rest and allow the ligaments to fully heal before participating in another training session or match.

Here’s some of the best wrestling gear you can buy from Amazon.com:

Greco-Roman wrestling can be a dangerous sport, given moves such as throws and suplexes require intense body motions. Both aggressors and receivers of these moves can suffer injuries to their upper and lower bodies.

There’s no evidence to suggest Greco-Roman wrestling is significantly more or less dangerous than Freestyle wrestling. Even though Greco-Roman competition does not permit attacking an opponent’s lower body, knee and ankle injuries do still occur.

Wrestlers can take precautions to prevent injuries or mitigate their severeness. Headgear, mouthguards, and padding can protect your body and reduce recovery time between games.

link to Is BJJ Fanatics Legit? Here's what you can expect from their programs

Whether you are new to BJJ or just getting started you have probably heard of BJJfanatics.com. BJJ fanatics is the most popular source of BJJ instructionals and DVDs on the planet. However, you might...

This Post Contains Affiliate Links. Many people are seeking extra ways to improve their jiu-jitsu game. Whether a serious competitor or a hobbyist who has a limited schedule, many people are...