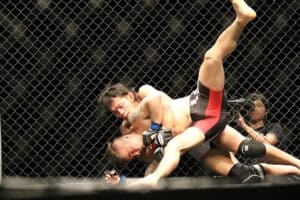 Judo is definitely an effective martial art for MMA.  In fact, many of the greatest MMA athletes of all time are black belts in judo. Of course, these judokas will have to cross-train in other arts and be able to adapt their judo for it to be truly effective and best utilized in MMA.

There are a few fighters that have brought attention to judo’s effectiveness in MMA. Probably the most popular would have to be Rhonda Rousey. This is for good reason too, I mean she did use judo to become one of the biggest MMA stars of all time. That said, there are actually a handful of judo black belts that have done great in MMA that people often forget about. Or they at least forget they got their start in judo.

In fact, some of the fighters who many people consider the greatest of all time have black belts in judo. Honestly, the list of fighters who have proven that judo is effective in MMA is a bit too large for this article. So let’s just take a look at a few of these examples so that I can quickly prove my point.

Fighters Who Have Proven That Judo Is Effective In MMA

The person that has brought more attention to judo’s effectiveness in MMA is Rhonda Rousey. This is simply because she used almost exclusively judo to win most of her fights. In fact, she won her first 8 professional fights via armbar or armlock in judo. This is a very popular submission used in judo. In her fights, Rhonda would use judo to get her opponent to the ground and then quickly submit them with a judo armlock.

In other words, her fighting style was pretty much pure judo. That is at least in the beginning, later on, she would start to use more of her striking. To be honest, however, it seemed to me that when she started relying less on her judo and started to try and box it out with her opponents is when she started to lose fights. Perhaps her opponents were just getting better as well, but I feel she would have done better by sticking to her original strategy.

Check out this video by fightTIPS of Rhonda Rousey using her judo throws in MMA!

Another amazing judo black belt that would often use judo in MMA is Fedor Emelianenko. Fedor is by many people’s accounts considered the greatest heavyweight fighter of all time. It seemed that in just about all of his fights he was physically outmatched. Though he is not a small guy in general, he was small when compared to the heavyweights he was fighting.

I believe that his judo skills were the reason he was able to grapple with people much bigger than him. He was able to use leverage and momentum to take down his opponents. Of course, he is also a sambo expert as well, which in itself is heavily influenced by judo.

Like his countryman and fellow judo black belt Khabib Nurmagomedov, Fedor was experienced in multiple grappling arts and utilized all of them when fighting. So it must be said, that they are both sambo fighters as well.

But Fedor was able to use his judo often in MMA and really showcased its effectiveness. In fact, he was even able to use his judo against some of the greatest wrestlers in the world. If you want to see a good example of this I suggest watching his fight against Chael Sonnen.

The only person that might be as pure of a judo fighter as Rhonda Rousey is Karo Parisian. Karo relied very heavily on judo to win his fights. He began training in judo when he was 9 years old and had the dream to become an Olympic gold medalist. When he was competing in the Olympic trials he got a call from the UFC and was invited to come to compete.

In need of money, Karo agreed and started his MMA career. During that time he was able to use his judo to defeat some of the greatest MMA fighters of his time. A few good examples include Nick Diaz and Matt Serra. In addition, he went the distance with GSP and even got close to securing a kimura.

Another amazing fighter who was able to showcase judo’s effectiveness in MMA is Hector Lombard. Hector is a 4th dan black belt in judo and had a great career in both judo and MMA. He was the first-ever Bellator middleweight champion and defeated some of the best fighters in his era. Hector proved that his judo was effective in MMA and even used it to beat some of the best grapplers in MMA.

A great example is his fight with Jake Shields, who was one of the best grapplers in MMA during that time. If you don’t want to watch the whole fight, then just check out this highlight video of Hector showcasing some masterful judo.

There are many other great judo black belts who have also proven judo can be effective in MMA. A few more honorable mentions would include Rick Hawn, Dan Severn, Don Frye, and Fabricio Werdum. That is just a few of them, but there are many more. In fact, you can read more about those fighters in my article: 15 Judo black belts that have done well in MMA. Of course, I should mention that many of these fighters are experts in other fighting styles as well.

Is Judo As Effective In MMA As Wrestling?

When it comes to takedowns and throws the two best grappling arts have to be wrestling and judo.  This is a crucial skill to learn for mixed martial arts. After all, the person with the best takedowns gets to decide where the fight goes. So then which one should you learn judo or wrestling?

Well, in my opinion, you should learn both to become a better MMA fighter and Grappler. There is so much you can learn from both of these arts. Of course, when it comes to wrestling there is more than one style. There is folkstyle, freestyle, Greco-Roman, and many others, such as the less known style of catch wrestling.

When comparing wrestling and judo for MMA I am mostly talking about freestyle and Greco-Roman. The biggest problem with these wrestling styles is that they lack submissions. Of course, there are other styles that have submissions such as catch wrestling. The problem there is that most people in the world do not have access to a catch wrestling school.

So by itself, judo might actually be more effective in an MMA fight than wrestling. But when a wrestler can learn submissions and throw punches and elbows its a different story. The real question is which art has better takedowns for MMA. Though I highly respect judo and believe MMA fighters should learn it, I am going to have to say that wrestling is probably more practical for MMA.

The reason is that both MMA fighters and wrestlers don’t wear a gi when they compete. Though I do believe there are very practical reasons to learn how to fight in the gi for real-life situations, we are only talking about MMA here. If your only focus is to learn martial arts for MMA then there is probably no reason to spend too much time training in a gi. Instead, it would be better to focus on takedowns from the clinch.

In addition to that judo has a much steeper learning curve. There is so much information to learn in judo and a fair amount of it will not transition well to MMA. Much of that has to do with its heavy reliance on the gi. That said, I think judo can be an excellent first martial art to learn, especially when starting at an early age. One common theme between judokas that have done well in MMA is that they got started in judo early.

This gave them plenty of time to learn the art before transitioning into MMA. If you are already a bit older and want to learn grappling for MMA then you should probably focus on wrestling. This is simply because you will be able to pick up wrestling much faster than you would judo. So for most people wrestling is going to be a more effective art to learn for MMA.

The simple answer is that judo is an effective martial art for MMA. In fact, there are a number of judo black belts that have proven this to be true. That said, judo does have a steep learning curve when compared to wrestling. That said, I think the best thing to do is to learn both judo and wrestling. However, if MMA is your only focus then you might want to focus more on wrestling. This is simply because wrestling focuses more on clinching than the use of a gi. Which of course you won’t be wearing in MMA.

Of course, judo is still very effective in MMA and is especially beneficial if someone can start early. Otherwise, you might just want to focus on learning some of the more effective judo techniques for MMA. Truthfully, the best thing you can do is learn the best grappling techniques from all the grappling arts that will transition well into MMA.