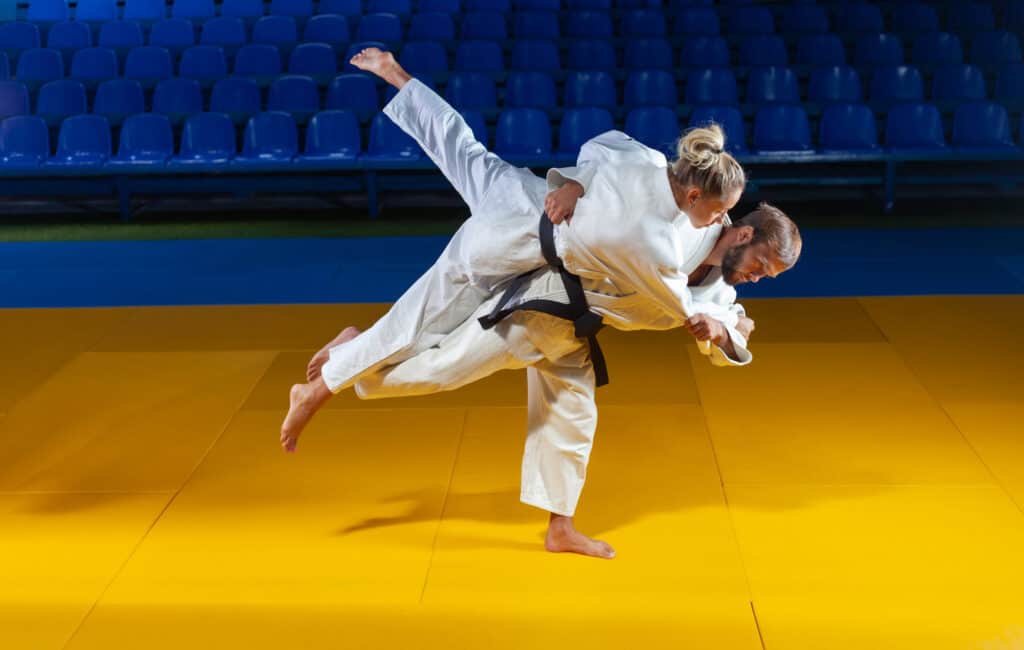 Judo is effective in both real-life situations and in mixed martial arts. In fact, some of the best fighters in the world came from a judo background and have proven judo’s effectiveness in the octagon. Judo is also a fun and effective way to get some exercise.

That said, there are certainly some techniques in judo that are only useful in the sport of judo and should not be used in real life. With that in mind, let’s talk about the effectiveness of judo in the real world.

Is Judo Effective For Self-Defense

Probably the first area to talk about is judo for self-defense. The truth of the matter is that techniques from judo can be very effective for a self-defense situation. That said, if self-defense is your goal then you will want to choose your dojo wisely. Some places that teach judo will have a self-defense program whereas others might only focus on sport judo.

Practically speaking, there are a ton of things you learn in judo that would be very effective for self-defense. This is especially true if you happen to need to defend yourself against someone wearing a jacket or something with a thick collar. Sending someone flying onto their backs with a judo throw will certainly do some damage.

Of course, this also means that you can really hurt someone if the situation arises. These kinds of things could lead to lawsuits and all sorts of other problems. But if it is a life or death situation you might not have any other choice.

That said, there are plenty of other judo techniques that are effective for self-defense but might not do as much damage. Instead, it could simply give you the opportunity to run away. After all, avoiding a confrontation is always the best form of self-defense.

Of course, if you want to focus on learning judo for self-defense then I would suggest finding a dojo with a self-defense program. Though you can still learn a lot of great techniques through sport judo, self-defense might not be the focus.

This is not because it has more effective techniques per se but because they get hours of real live training every week. In fact, an Olympic-level judoka would have the average person flying through the air before they even knew they were in a fight. So even if you are focused on self-defense you need to do live sparring to build the skill set for a real-life situation.

Is Judo Effective Without The Gi?

Of course, many people would agree that judo is effective in the gi but some would argue that it does not work without the gi. The truth of the matter is that judo is still effective in no-gi but you will simply need to modify some of the techniques.

Most of the throws and submissions from judo can be modified to be used without the judogi. The main, difference is that you will be using different grips. In fact, much of what you learn will have similarities to Greco roman wrestling.

There are great instructionals and free videos online that can help you modify your judo techniques to be used without the judogi. One example would be the No-Gi Takedowns Made Easy by Rick Hawn instructional. Rick Hawn as you might know is one of the most successful judokas who transitioned into MMA.

Additionally like we discussed even though you do not wear a judogi in the street, many items of clothing can be used the same way a gi would. Whether you are doing judo or BJJ, many people assume that no-gi is more realistic. But I think learning both in the gi and without the gi is the best practice for being prepared for multiple situations.

Is Judo Effective In MMA?

So we have established that judo is effective for self-defense, but what about MMA. Are judokas able to use their judo effectively against a trained mixed martial artist? Well, even though judo might not be as established in MMA as much as BJJ or wrestling, there have certainly been judokas that have proven their effectiveness in the cage. I go into more detail in my article: Is judo effective in MMA, but let’s quickly talk about the issue.

The truth is that judo is most certainly effective in MMA. In fact, there are a few judo black belts that many would consider being the greatest MMA fighters of all time. I won’t name them all but a few that come to mind are Rhonda Rousey, Khabib Nurmagomedov, and Fedor Emelianenko. Of course, these judo black belts had to cross-train in other arts and modify their judo for MMA. That said, they all used judo effectively in MMA.

So simply put judo is very effective in MMA but you will still need to cross-train in other martial arts. That said, this is also true of any singular martial art including wrestling, BJJ, boxing, or Muay Thai. In today’s world, you can’t really be a one-trick pony anymore. If you are interested in MMA my suggestion would be to study some of the judo techniques that have been used effectively in MMA.

Is Judo Effective For Smaller People?

First and foremost, I want to say upfront that size and strength do matter in judo and every other martial art for that matter. Now, of course, I am not saying that technique cannot overcome a certain amount of size and strength either. The truth is that both are very important aspects of the martial art and sport of judo. After all, there is a reason for weight classes in judo and just about all other combat sports.

So if you are on the smaller side I am not trying to discourage you nor am I trying to give you a false sense of hope. The truth is that if you want to be able to protect yourself or become a great judoka you should strive to be as strong and athletic as you can. That being said, we are not all born with the same ability to put on size. And thankfully, martial arts like judo can help you overcome an untrained opponent that is considerably larger than you.

My only reason for being so blunt about this issue is that I feel many martial artists, especially those who don’t compete, do not take physical training seriously. However, we all know that anyone who wants to step into MMA or compete in Olympic judo better be hitting the weight room. But as I mentioned earlier we can all hit the weights for hours each day but our genetics are going to limit each person differently on how much size they can put on their bodies.

With the right amount of leverage, you can lift anything. So learning how to properly use leverage on an opponent is one way for a smaller judoka to close the gap on size and strength. Judo is one of the most effective martial arts for utilizing leverage to your advantage.

If you are interested in self-defense I think it is best to learn both striking and grappling. That being said, usually ( but not always ) if you are able to throw a punch at someone you can probably also run away. The problem for many people is they cannot run away because the attacker has gotten a grip or a hold on their victim. Because of this, I think that grappling arts such as judo can be very effective in a situation where someone is trying to hold you down.

Judo Is An Effective Martial Art

Or if you simply want to learn judo for fun and competition that is fine too. Judo is a very fun and effective martial art that is great for your mind and getting some extra exercise. Whatever your goal, judo is a great martial and should not be lumped in the mix with some of the more outdated martial arts.