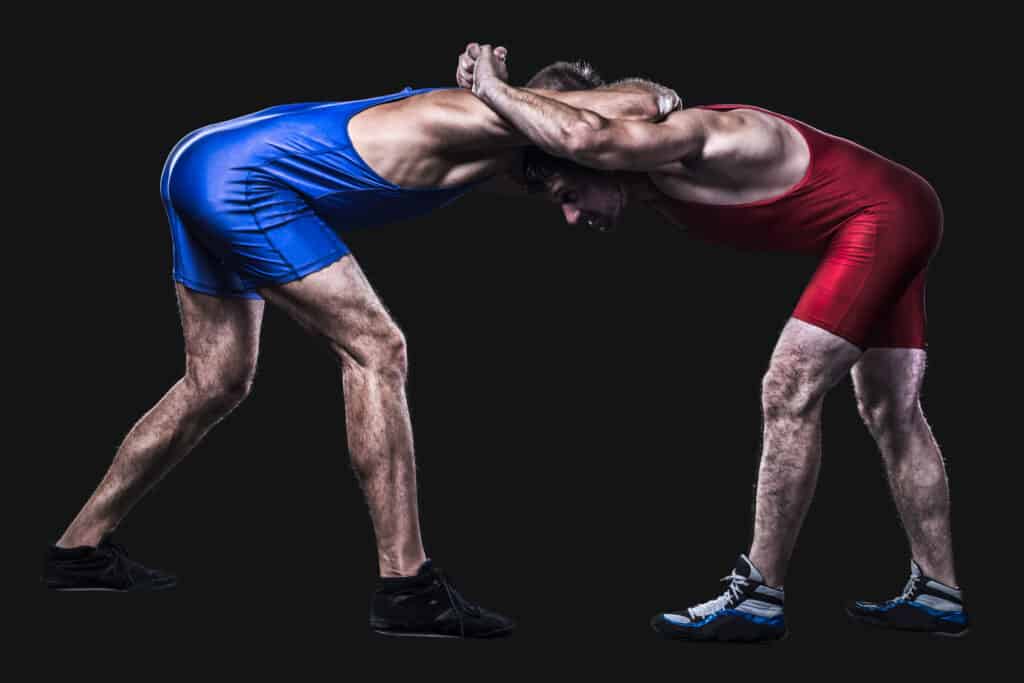 There are a ton of tough sports to choose from if you enjoy a challenge. But of all the sports out there many people would argue that the hardest sport is wrestling. But is this true? Is wrestling really the toughest sport in the world?

Wrestling is one of the toughest sports in the world. It requires a combination of mental and physical determination, speed, and tactfulness. The best wrestlers train for hours on end with weights or at the gymnasiums until they are physically and mentally prepared for competition.

Read on for more information on what makes wrestling challenging and tips on getting started in this sport.

Why Wrestling Is The Toughest Sport

Some people might say that wrestling is not really a “sport,” but rather an event or form of martial arts. However, many would argue to the contrary and claim that wrestling requires more mental determination than any other physical activity.

For instance, wrestlers have to train their minds as well as their bodies to be successful. This is one of the many reasons I think wrestlers also do very well in MMA.

That being said, here are the key factors that make wrestling one of the most challenging sports:

Wrestling requires a lot of physical strength and endurance: wrestlers have to carry their opponents throughout a match and keep them from pinning them down. For wrestlers to win and maintain bragging rights with other competitors afterward, they must endure multiple rounds against different people.

Besides, wrestling is the only sport that does not allow substitutions on the fly.

Wrestling requires mental strength and determination to succeed. For instance, wrestlers have to maintain their composure during intense matches in which they might feel dominated or frustrated.

Additionally, they must keep their concentration levels and focus in check to make strategic decisions that will ultimately lead to victory.

You Take a Beating From Opponents

Wrestlers have to take punishment from their opponents: they might be thrown to the ground and made to take a pinning position. They also have to endure being in holds that are meant to immobilize and cause pain and discomfort. In some cases, these can cause serious injuries.

The other factor is wrestlers don’t have any substitutes on the bench: they can only wrestle one match at a time until it’s over.

Some wrestlers are required to cut weight before matches to meet the requirements for their weight class.

In some cases, this is done through dehydration and in others by consuming a low-calorie diet. This can be dangerous to wrestlers’ health when done in an improper way. This is especially true when wrestlers cut weight through dehydration. Which of course, I do not recommend.

That said, wrestling is full of many tough guys and girls that are willing to go to extreme measures to get an edge on their opponent.

Wrestling Has A Tough Culture

Simply put wrestling comes from a culture of tough guys. The two most common styles of wrestling practiced in the United States are Folkstyle and Freestyle wrestling. Both of these styles were heavily influenced by English catch wrestling.

Catch wrestling was a brutal style of submission wrestling practiced originally by English blue-collar workers. These wrestlers were as tough as they came with some matches resulting in serious injuries. Of course, these newer styles are not as extreme but the tough guy nature is still part of the culture.

That said, in wrestling, just as in life: The winner is not always the one who has the most skill or talent. Instead, it’s usually determined by who can endure more and keep going despite obstacles like fatigue and injury.

How To Get Started in Wrestling

Despite its demanding nature, wrestling is one of the greatest sports to take up to develop character, discipline, and the confidence to take on the biggest challenges in life.

If you want to get started in this sport, here are the key steps to follow:

It would help to follow these guidelines throughout the steps above:

How To Avoid Common Injuries in Wrestling

Do you want to avoid common injuries in wrestling? Follow these easy guidelines:

Tip: Also, eat healthy foods that provide adequate protein, vitamins, and minerals. Eat a diet rich in fruits and vegetables. Avoid processed or fast food for the most part; it’s typically high in fat content and not as nutritious as other options. Drink plenty of water.

Wrestling is a tough sport, but anyone can become the best with the right training and mental discipline. In most cases, elite wrestlers train for hours on end with weights or at the gymnasiums until they are physically and mentally prepared for competition.

The emphasis on physicality in wrestling means that it takes time to build muscle mass or lose weight. But if you’re willing to put in hard work, nothing will stop you from reaching your ultimate goal.