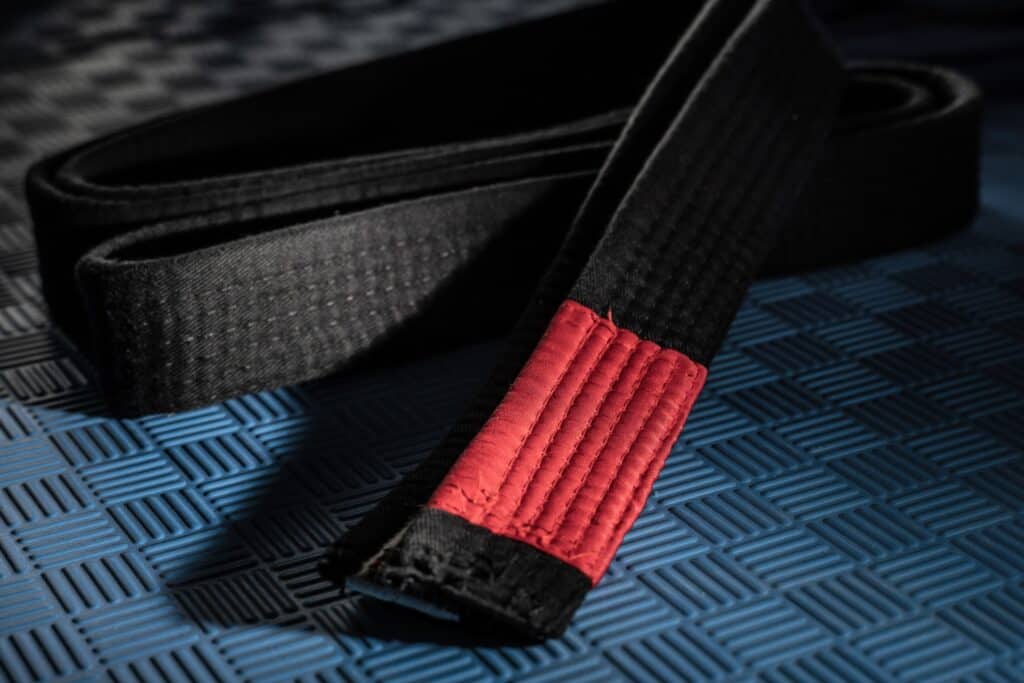 We all know Joe Rogan loves to talk about BJJ. After all, he often has BJJ experts on his podcast and never shies away from a conversation about jiu-jitsu. But how good is Joe Rogan at BJJ and is he a legit black belt?

In fact, Joe Rogan actually was the first person to think of the name 10th planet jiu-jitsu. So you know Joe Rogan has been doing BJJ for quite some time.

Before BJJ, Joe Rogan had already been doing martial arts for some time. It seems that Joe Rogan did some wrestling back in high school. So believe it or not BJJ was not Joe Rogan’s first grappling art.

During a podcast, he explained that he got into wrestling due to an altercation with a kid in a locker room. Apparently, a bully got him into a headlock and threw him to the ground. The kid had his fist out able to punch him but decided not to.

This experience got Joe Rogan into both wrestling and Karate. I don’t recall hearing much about Joe Rogan’s experience with karate but I do know he started to do Tae Kwon Do at an early age as well.

According to his website joerogan.com, he started doing martial arts at the age of 13.  He would then receive his black belt within two years.

Joe Rogan also spent some time as a Tae Kwon Do instructor. So it is clear that he has had a passion for martial arts for a very long time.

He also has a background in Muay Thai and had three fights as an amateur kickboxer. So as you can see Joe Rogan was already an experienced martial artist before he started BJJ.

When Did Joe Rogan Start Training In BJJ?

Like many people, Joe Rogan first got interested in BJJ after watching Royce Gracie in the early UFCs. He started training BJJ under Carlson Gracie in Hollywood, California in 1996.

At some point later Joe Rogan would start training under Jean Jacques Machado. So Joe Rogan is not only a BJJ black belt but has been training BJJ for over 25 years.

I am not sure of the exact date but it would seem he was already training with Machado not too long after 1996. This is where Joe Rogan and Eddie Bravo became friends. At this time Joe Rogan was a blue belt and Eddie Bravo was a purple belt.

In 2003 Eddie Bravo would make a name for himself by defeating Royler Gracie in the ADCC quarter-finals. When Eddie returned he received his black belt from Jean Jacques Machado.

He then went out and started 10th Planet Jiu-Jitsu. Joe Rogan actually helped Eddie come up with the name 1oth Planet. This would be the first jiu-jitsu school that would not incorporate the BJJ gi. Though it seems normal now this was a big deal in the BJJ community at the time.

Joe Rogan would then start to train under both Eddie and Jean Jacques Machado. He would also go on to receive a black belt from both of these BJJ legends. So not only is Joe Rogan a BJJ black belt, but he is a very experienced black belt with many years under his belt ( no pun intended ).

When Did Joe Rogan Become A BJJ Black Belt?

Joe Rogan received his 10th planet black belt on June 26, 2012. This would be somewhere around 16 years after starting BJJ. Joe Rogan even says in one of his podcasts that he was a brown belt for 8 years. That’s a long time to be a brown belt. After all, most receive their brown belts after about 8 years of training.

This is totally understandable as he was not able to train as much as I’m sure he would have liked to. But as someone who has become a famous stand-up comic, UFC commentator, reality tv host, and host of one of the biggest podcasts in the world.

Heck, I’m impressed he ever found the time to even get a black belt in BJJ.

How Long Did It Take Joe Rogan To Become A Black Belt In BJJ?

Joe Rogan had been training for about 16 years before becoming a black belt in 10th Planet Jiu-Jitsu. After so much time training BJJ, I am sure this was a very gratifying moment for him.

He would then go on to get his BJJ black belt from Jean Jacques Machado in September 2012. Joe Rogan has probably brought more awareness to Brazilian jiu-jitsu than just about anybody outside of the Gracie family.

This is due simply to talking about his love for BJJ to his millions of fans worldwide.

If you listen to the Joe Rogan podcast you probably already know that he talks very highly about BJJ. In fact, he has even said that he believes BJJ to be the best martial art in the world for self-defense.

How Many Black Belts Does Joe Rogan Have?

Though many would argue that a 10th planet black belt is the same as a BJJ black belt they are still technically different belts. Yes, there is a ton of cross over but it would almost be like having 2 black belts in two different karate styles. Both are karate but they have different systems that you need to learn.

How Good Is Joe Rogan At BJJ?

We have already established that Joe Rogan is a legit BJJ black belt. However, there are levels to BJJ even at the black belt level. Since Joe Rogan has not pursued a career in becoming a high-level BJJ competitor it is hard to determine just how good of a black belt he is.

That said, it is easy to say that most people who have trained with Joe Rogan confirm that he is very talented at BJJ. He obviously has a black belt level understanding of jiu-jitsu both in and out of the gi.

How well would he have done against active competitors is hard to say, but we can for sure say that Joe Rogan is a very skilled BJJ black belt and martial artist.