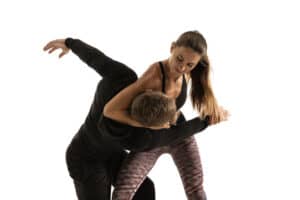 Interested in learning judo but not sure if judo is good for self-defense? To answer this question correctly we will need to dive a bit deeper into the subject. That said, let me give you the elevator pitch for judo as a self-defense art first, then we will dive deeper into the question.

Judo is effective for self-defense when properly applied. If self-defense is your goal then you should choose a judo academy that has a focus on self-defense. Some judo schools only focus on sport judo which is designed primarly for sport and not self-defense.

In addition to judo, you might also want to cross-train in other various martial arts to become more well-rounded for self-defense purposes. That said, you cannot learn everything at once, so judo can be a good discipline to get started with. Of course, as previously stated you want to find the right school first.

One thing that you must consider before learning judo for self-defense is choosing the right dojo and Sensei. With a little understanding of the history you would know that judo evolved from traditional Japanese jujutsu.

Japanese jujutsu was the martial arts system of the samurai for hand-to-hand combat. Later on, Kano Jigoro modified the art to be more applicable to his era. This would be the late 1800’s and early 1900s.

He put a lot more focus on randori which is what we would call sparring. I think sparring is essential for actually developing the skills needed for self-defense. Judo was a very complete grappling art with both a stand-up and a ground game when it began. In fact, much of what you learn in BJJ today was originally in judo.

How Many Judo Schools Have Moved Away From Practicing Self-Defense

However, once judo became an Olympic sport many dojos started to focus less on the ground game and more on throws and quick pins and submissions. In turn, many of the schools today are solely focused on sport judo and do not put much emphasis on teaching self-defense.

There are, however,  some schools that teach both judo for sport and for self-defense. This is important because there are many things that you would want to do differently if you are in a self-defense situation.

In sport judo, you should do what you can to keep your opponent safe. In a life or death situation, however, you might want to send them flying into the ground. Of course, depending on where you live in the world you might get in a lot of trouble, but then again you might not have another choice.

I have heard horror stories of people spending time in prison because they used judo to defend themselves.

Is Sport Judo Good For Self-Defense?

This might make you wonder if competitive Olympic-style judo can help in a self-defense situation. Perhaps you want to learn the sport but would not mind knowing how to defend yourself as well.

The answer to this question is that yes of course sport judo can help. You just might need to make some modifications and use some common sense.

The truth is that anyone who is practicing a combat sport like judo is going to be more ready for a street fight than your average joe. After all, boxing is a sport that does not focus on self-defense but you still probably would not want to mug Mike Tyson would you?

You will however need to modify some of the techniques of judo to be more effective in a real-life situation. You will also need to learn some basics on how to defend yourself from strikes and how to close the distance between you and an attacker. Some things in judo such as grip fighting will help you develop some of these skills.

If they are able to avoid getting hit and can close the distance, then a judoka would be a very dangerous force. After all, sending someone flying onto a concrete floor can seriously injure them or even kill them.

So it is something that should not be taken lightly and should not be used simply to show off how tuff you are. You can after all, seriously injure someone with a judo throw.

The best thing you can do is avoid the situation altogether if it is possible. That said, learning some great throws can help you defend yourself if it ever becomes necessary.

That said, judo can be as effective as any martial art against multiple attackers. After all, if you are good you can execute a throw pretty quickly. If you are attacked by one person and have good ground fighting skills you might choose to throw them to the ground a use a choke on them.

However, if you are fighting off more than one person, then you probably do not want to go to the ground. That is unless you just want to get stomped in the head.

Instead, you would want to try and stand on your feet, throw your attackers to the ground and do your best to escape the situation. Judo is great for self-defense in a situation like that.

Cons Of Learning Judo For Self-Defense?

The main con of judo for self-defense is that you do not learn how to strike. That is unless you have found a dojo that does some cross-training within their self-defense system. Otherwise, you will probably want to learn at least the basics of striking and learn how to avoid getting hit.

Another potential con to judo for self-defense is that it can be very dangerous for your opponent. I know that this can just as easily be a pro instead of a con.

But you do need to take into consideration that you can seriously injure someone using judo techniques in real life. After all, you probably will not be throwing them onto padded mats.

Even in judo competitions, people are getting knocked out on mats when they are not even dropped directly onto their heads. Think about what could happen if you send someone flying down into the concrete on their heads.

You might be in a situation where you are simply fighting for your life and have to make quick choices, but you do need to know how dangerous it can be.

Defending yourself is one thing, but you should never get into an altercation that can be avoided. So don’t use judo unless you have to.

Cross Training Is The Most Effective For Self-Defense

If you want to focus on self-defense then you likely will want to get some cross-training. To become more well-rounded you might want to consider becoming somewhat skilled in a striking art as well. There are a ton of great options to choose from such as boxing, Muay Thai, and even some karate styles.

Just make sure that you are actually doing some sparring and not just doing an exercise kickboxing class. In a real fight, you will be in fight or flight mode and you need actually practice real sparring. Nothing will prepare you for a real-life situation but sparring is probably the best thing that can.

Next, you might even want to learn some BJJ or get better at ground fighting. Like with judo, you will want to choose a BJJ school that focuses on self-defense. Some BJJ schools only focus on sport BJJ.

Adapting Your Judo For Self-Defense

You might also want to learn some wrestling as well. Or perhaps just learn how to adapt your judo throws to work when someone is not wearing a judogi. Don’t get me wrong it is great to learn how to fight someone in the gi. After all, there is a good chance someone will be wearing thick clothing and you will want to use anything you can.

But you also want to learn how to adapt your judo where you can use your throws without needing a gi. This is because there is also a chance you will be attacked by someone in a thin t-shirt or even no shirt at all.

Lastly, but most importantly you need to learn how do de-escalate a situation when it is possible. Many times you can simply avoid an altercation altogether. Also, you need to learn how to simply try and escape the situation. That said, it’s good to feel confident that you can defend yourself if you ever need to.

Judo is a great martial art to learn for self-defense purposes. Of course, you will want to choose the right dojo and sensei first. Many places are only focused on sport judo.

That said, even sport judo can help you become more prepared for a self-defense situation. You just need to know how to modify some techniques and learn what not to do in a real-life situation.

Though judo is great for self-defense, you still might want to do some cross-training in other martial arts. Take up some boxing, BJJ, and wrestling to help you become more well-rounded.

Of course, there are a ton of martial arts that are great for self-defense as well. That said, don’t dismiss judo when it comes to learning how to protect yourself.