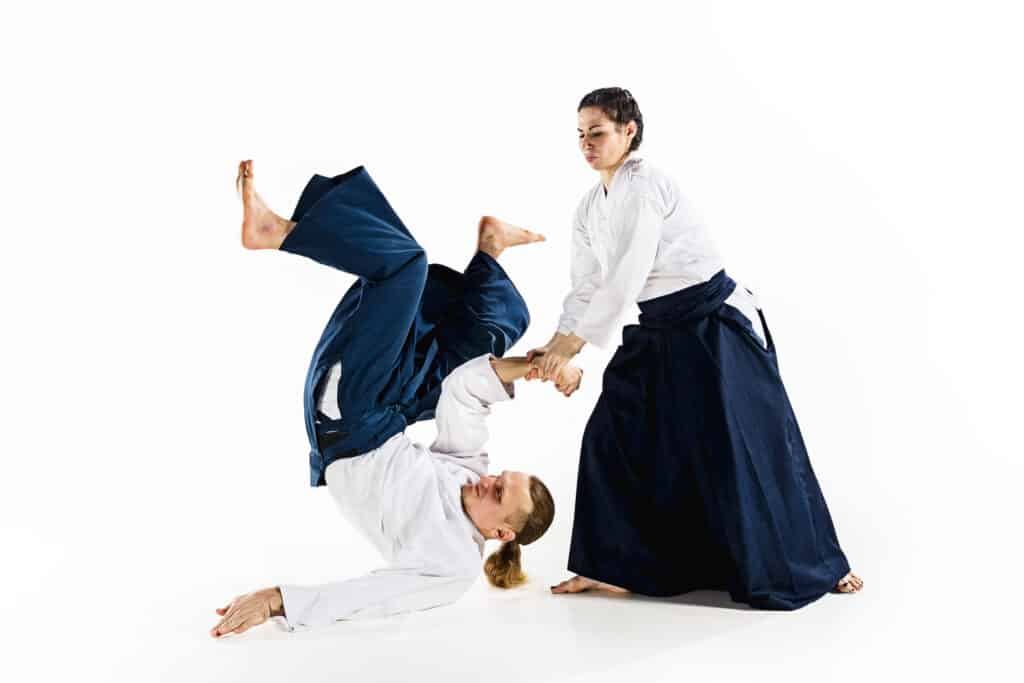 Judo and Aikido can be hard to differentiate for the untrained eye, given the close resemblance in their uniforms as well as some of the moves and techniques. If you’re trying to choose between the two fighting styles and can’t seem to make up your mind because you don’t know their differences, you’re in the right place. Today’s post is all about comparing these martial arts styles to make your choice easier.

Judo and Aikido differ in terms of practice, competitiveness, history, and level of aggression. Judo is a sport, whereas Aikido is non-competitive and primarily practiced for self-defense. It’s also more aggressive and older than Aikido. Unlike Judo, Aikido practice involves several opponents.

Read on for an exhaustive comparison of Judo and Aikido based on the above merits and actionable tips on choosing between the two.

What Is The Difference Between Judo and Aikido

One of the primary differences between these two forms of martial arts lies in the main reason they’re practiced.

Judo is mainly practiced for competition. It’s a legitimate sport with millions of fans around the world, medals, and tournaments. Many rules govern every aspect, from clothing to the kind of moves competitors may use. Judo also has a lengthy history at the Olympics.

Though historically judo was not always as focused on the sport aspect of the martial art, it is clear that it is the major focus in most judo dojos today. When judo started there was much more emphasis on other aspects of the art. In fact, much of what you see in Brazilain jiu-jitsu today was regularly practiced by judokas.

This would include more emphasis on newaza ( ground fighting ) and submissions. In fact, BJJ evolved from judo after it was taught to the Gracie family in Brazil. Not that all of this knowledge is totally lost in all judo dojos but most of them simply focus more on the sport of judo.

On the other hand, Aikido is practiced strictly for self-defense and self-improvement. You could of course say that this is still important to many judokas today but aikido puts more focus on it today.  In addition to teaching techniques for protecting yourself in (mostly) hand-to-hand combat, Aikido seeks to unite practitioners with their nature to achieve perfect harmony.

Introducing a competitive element would change Aikidoka’s desire and focus to trying to dominate the opponent. This shift in focus would make it impossible for Akidokas to uphold its original purpose and is why we still don’t have Aikido in international and Olympic competitions.

Of course, the downside is that by having a sport you can truly put your skills and techniques to the test. Personally, I think the best of both worlds is to practice both art and sport together. This is something you can find in BJJ today, though many feel that BJJ is heading down the same path as judo and focusing too much on the sport.

Another key distinction between Judo and Aikido is their nature of practice and training.

When training for Judo, you’ll mostly be up against one attacker. You train to handle one opponent at a time, which is understandable given that most people practice Judo as a sport and that professional competitions feature one on one matches.

On the other hand, Aikido prepares you for the unpredictability of real-life attacks. Your training is based on the notion that you may be up against more than one individual, with attacks coming from any direction. That’s why practice for two of the most advanced Aikido techniques (Jiyu Waza and Randori) involves simultaneously going up against multiple attackers.

Of course, one major criticism against aikido is how effective their techniques truly are in the first place. Many would argue that the aikido demonstrations of someone fighting off multiple attackers are simply unrealistic and would not work in the real world.

Perhaps they are wrong, but one thing we can be sure of is that combat sports do put techniques to the test even if it is against only one attacker.

Judo Is More Physical and Aggressive Than Aikido

Judo and Aikido also differ in style. In Judo, the focus is on overpowering, taking down, and putting a submission hold on your opponent.

Even though there’s an element of technique to executing Judo takedowns and submissions, a lot of physical strength is required because you need to overpower someone before taking them down and submitting them. Being strong and athletic is very important in judo.

With adequate training, your body develops this combination of brute strength and technique. That’s why it’s possible to use Judo for self-defense, especially when you’re up against someone who’s not trained.

Although Judo is a sport (meaning it isn’t designed to be used in war), it’s aggressive and physical enough to be effective in self-defense. A skilled Judoka can easily lock and break a joint with the right moves and position. Not to mention throwing someone down and the ground or cement with a lot of force.

On the other hand, Aikido’s primary strategy is to use your attacker’s force and bodyweight against them to execute a move that’ll incapacitate them and end the fight. This is despite the fact that grabs and takedowns are crucial elements of this martial art.

The above statement highlights one key element of Aikido: it’s mostly a counter-attacking fighting technique, where you’re not the one initiating the confrontation. Instead, you’re reacting to an attack by redirecting the opponent’s force to take them out of the fight as quickly as possible or put them down temporarily and give yourself some room to escape.

Although the aim is to incapacitate the attacker, there’s an emphasis on doing that in the least violent way possible.

Put otherwise, Aikido teaches you how to end a confrontation with the least possible aggression and without dealing severe damage to your attacker unless it’s necessary.

This is different from using Judo for self-defense, where you don’t care much about your attacker’s safety一the aim is to overpower and neutralize them with all your might and skill.

Another key trait of Aikido is that its moves don’t require you to be stronger than the attacker or match their strength. Since this martial art is mostly about using their momentum against them, you can use Aikido moves to throw down people who are much stronger and bigger than you. That’s why women and children are often drawn to aikido.

Judo Is Older Than Aikido

Another way to differentiate between these two martial arts is by looking at their history. Despite sharing some similarities in terms of the fighting style, Judo and Aikido have different origins.

Judo was coined by Jigoro Kano in 1882 and gained popularity in the 1900s. It was the first martial art to use a belt and a gi as uniform and was primarily geared towards competition instead of war and street combat. It took a lot of inspiration from Kito Ryu and Tenjin Shinyo martial arts schools, turning it into a form of Jujitsu based on chokes, grappling, and submission.

Judo’s founder was also close to the father of Shotokan Karate, Gichin Funakoshi. Through this friendship, Kano learned some Shotokan Striking techniques (especially Atemi Waza) and applied them to the martial art he had earlier invented.

On the other hand, modern aikido was invented way after Judo in the 1930s and 40s by Morihei Ueshiba.

Among the key motivations behind his invention was his realization that many Jujutsu schools were turning students into rude and violent individuals. They were teaching techniques geared towards combat, causing injuries among students and other people.

Not saying this is true or false of judo at the time but was certainly thought to have been true to the Aikido founder.

Borrowing from some of the Daito-Ryu-Aiki-Jutsu techniques (also used in Judo), Ueshiba created an integrated system that combined martial arts with philosophy. This system evolved with time to form Aikido as we know it today.

The main principle behind Aikido’s philosophy was to turn martial arts into a lifestyle of discipline, peace, and harmony. Subscribers of this philosophy would learn martial arts primarily for self-defense and not the desire to harm and abuse others.

That’s why most of the moves in Aikido are focused on incapacitating the opponent without seriously injuring them. It’s also why Aikido is fixated on counteracting attacks and not initiating them.

Judo vs. Aikido: Which Is Better?

The answer to this question largely depends on your physique and why you’re looking to learn either martial art. Personally, I am admittedly biased towards judo. This is simply because even though aikido is great in theory I do not think it gets put to the test like judo.

But as I said, I am biased towards judo. Because of this, I am simply going to talk about which is better for you based on the pure intentions of the marital art.

Let’s tackle each factor separately, starting with the physique.

If you’re not physically strong and aren’t willing to invest time and effort to improve your build, you might be better off practicing Aikido. That’s because it requires less physical strength than Judo and can be used against stronger and bigger opponents in a confrontation.

Additionally, it involves less movement than Judo. Turning and entering are the only types of movement involved. That means anyone can execute Aikido moves regardless of their agility, strength, or size. It’s why most parents choose this fighting technique for their children.

On the other hand, people with a solid build may be better off learning Judo. This way, they can make the most of their strength and conditioning by learning a fighting style that favors their physical ability.

Everybody practices martial arts for different reasons. People commonly do it for discipline and character development, self-defense, or purely for competition purposes. Depending on which of these motivations resonate with you, you may be better off with either Judo or Aikido.

While both types of martial arts help with character development, Aikido is less focused on sport and competition. This makes it a better fit for children, particularly if you’re trying to improve their self-defense skills while also teaching them that they shouldn’t abuse their skills.

Another argument for choosing Aikido for your kid is that it teaches how to neutralize attacks without severely injuring the opponent. This helps ensure that even when your child is defending him/herself, he/she won’t cause substantial damage to other children and trigger disputes or even lawsuits.

There’s no denying that trained Judoka can choke out most people in a street fight. But executing a judo throw on a hard surface can severely injure or even kill your opponent. At the same, time many would suggest that in a real life or death self-defense situation you have to do what you have to do.

In judo, you get the real practice of someone attacking you with everything they got. In some ( not all ) aikido schools you might still have zero experience going against someone who is really trying to take you down.

Judo is a better choice for someone looking to compete. It has established systems and regulations for competition and is even an Olympic sport. It’s also a better way to stay fit than Aikido because it’s more physical.

That’s it for our comparison of Judo and Aikido. Hopefully, you can now differentiate between these two martial arts and will choose the most suitable fighting style for your physique and goals. All the best!