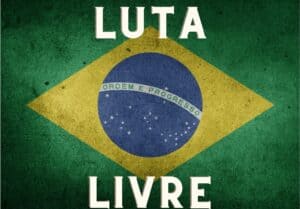 Luta Livre is an amazing martial art that often gets overlooked. This grappling art combines kicks and punches with aggressive takedowns and ground control. Its strong influences from catch wrestling and its Vale Tudo (anything goes) style make it an early form of Brazilian MMA.

Luta livre is a martial art and grappling sport. It started in Brazil and was mostly influenced by catch wrestling. It is also historically a rival martial art to BJJ.

Though luta livre incorporates striking, the base of the art is a grappling style that is similar to catch wrestling and BJJ. Of course, today there are really two forms of Luta Livre.

There is the more complete martial art that incorporates striking and then there is the sport. The sport of Luta livre is purely a grappling sport.

Although Luta Livre lacks current popularity, its wild history is reason enough for it to be of interest around the world. Luta Livre’s birth story is full of rivalry, scandal, controversy, violence, victory, and heartbreak. If you want to practice this form yourself, it is necessary to understand the context from which it comes.

Where Did Luta Livre Come From?

When literally translating the term Luta Livre from Brazilian Portuguese, you get “freestyle fighting.” However, more colloquially, it simply signifies “wrestling.” This new discipline, marked by its wild blend of previously unallowed moves, first came about in 1909.

While its takedowns and ground control are a classic part of the grappling arts, Luta Livre caught attention for the striking it included as well as the different holds and chokes.

Luta Livre can be traced to both catch wrestling and Judo. Catch wrestling, also known as “Catch As Catch Can,” is an English-born style of grappling that focuses on pins and brutal submissions.

In fact, catch wrestling is all about taking down the opponent and getting submissions quickly and aggressively.

Catch wrestling values the ability to inflict pain on the opponent. By knowing how you can cause pain and how the opponent is likely to respond, you gain control of the situation and can more effectively manipulate the outcomes. This was unseen in other forms, such as the soon-to-be rival, Brazilian Jiu-Jitsu.

When it comes to takedowns and formalities, this is where you can best see Judo’s influence. You can see Judo-styled takedowns used in matches.

Also, the ranking system of color belts that comes from Judo exists in Luta Livre as well. However, the catch influence is much stronger, as you can see when witnessing a fight itself.

As catch wrestling took hold in South America, it took on a life of its own in Brazil, most strongly informing Luta Livre.

One other part of Luta Livre that was quite revolutionary at the time was the lack of gi. The judogi, or more commonly referred to as gi, is the traditional white kimono-style uniform from the Judo tradition.

At the time in Brazil, these were expensive and difficult to obtain. The fact that Luta Livre did not use it meant it was a fighting style accessible to all, regardless of socioeconomic status.

Within Luta Livre itself, there are two main styles of fighting. First is “Esportiva” or “sporting,” which is considered the more structured of the two.

And now we come to Vale Tudo, or literally, “anything goes.” Here, the name says it all. We have mentioned the wide range of never-before-seen moves in grappling and it was here they were allowed.

Striking, locks, holds, chokes, brutal takedowns, aggressive submissions. It was all allowed in this style, encompassing a wide range of influences that laid the foundation for future Brazilian MMA.

The Rise Of Luta Livre

In the 1930s, one top fighter began to emerge. He was a man by the name of Euclydes “Tatu” Hatem. Tatu, meaning “armadillo” in English, started fighting as a catch wrestler as a teenager and became known as one of the most important men for this Luta Livre.

He was constantly challenging others to fight him and continuously defeating them. One of his most famous challenges in 1940 would set the tone for a fierce rivalry that would extend for decades.

The family would become the greatest legacy in BJJ and pass the sport down through the family for generations. You can know more about this in the video below.

That brings us back to 1940 when Luta Livre’s Hatu and George Gracie faced off in a challenge. In this much-hyped, Vale Tudo, no-gi fight, Hatem managed to submit the prominent Gracie and claimed victory for Luta Livre.

This was not only important in terms of sport, but in terms of what the victory represented. The Gracies represented Brazil’s upper class, those of European descent and typically with a lighter complexion.

To train in this style, you needed money to access the in-demand trainers and the required gi uniform. On the other hand, Luta Livre was a more accessible version of the sport with little to no cost to participate.

Luta Livre was often taken up by Brazilians of African descent. To see Luta Livre take victory over BJJ through real fighting skills and not through affluence or social power was invigorating.

Keep in mind the time that these challenges were occurring. In the 1940s and 1950s around the world, racism, separation, and socioeconomic division were still very much the norm.

In this particular moment, a sportsman rivalry that highlighted real-life disparities was particularly powerful.

So, the rivalry exploded. Fans on each side would instigate incidents on the street while the biggest names from both camps would face off in challenges that added fuel to the flame.

Let’s have a look at a few other high-stakes matches between the Gracies and the Luta Livre crew.

This time, it was Euclides Pereira who was to face a Gracie in a Tudo Vale challenge. In 1968, Pereira and Carlson Gracie fought for 50 long minutes, causing Gracie to suffer a break to the nose and other injuries around his eye.

Pereira claimed victory in the 4th round, creating another electrifying victory.

However, the 1980s was the peak of popularity for Luta Livre. Unfortunately, Luta Livre started to lose steam compared to the ever-more popular art of BJJ.

This was around the time when the Ultimate Fighting Championship (UFC) in the United States began to emerge and the Gracie family joined in with this new North American venture.

Unfortunately, this only continued to push Luta Livre out of the mainstream. From the defeat on the beaches of Rio to the perceived violence and chaos of the Pentagon incident.

The reputation of the Luta Livre was not strong enough to compete in the popularity contest that BJJ was winning. Especially as many BJJ stars went to the USA to participate in the UFC, Luta Livre could not keep up.

However, this is not to say their legacy has been lost. Luta Livre has undoubtedly influenced how MMA has developed in Brazil. Being such a powerhouse for fighters, any influence felt in Brazil is certainly felt worldwide.

Even though Luta Livre may not be a household name anymore today, it has certainly shaped the martial arts that we do know around the world.

How To Get Started

Because Luta Livre doesn’t have the same mainstream popularity as its closely related rival Brazilian Jiu-Jitsu, it may be more difficult to locate a master trainer in your area or even access the same amount of information. However, that does not mean that you can’t take some steps to get started today.

Luta Livre’s combination of aggressive takedowns and submissions with added striking makes it appealing to fighters from all different disciplines.

Since it utilizes so many different moves, it’s important to lay some foundation in each of these areas. Let’s take a look at how you can start to lay that foundation.

You may be wondering now– well, how do I get even get started in Luta Livre? A great first step is joining a gym. If you have a Luta Livre gym in your area consider yourself lucky.

As we’ve mentioned before, due to the lack of current mainstream popularity or perhaps your geographical location, it might not be possible for you to train with someone who is officially a Luta Livre trainer.

If you can’t find something clearly defined as “Luta Livre,” it doesn’t mean you have to delay your dreams of getting started.

In this case, I would probably just join a BJJ or MMA gym. That is unless you are willing to make a move to find a Luta Livre Gym. After building a base I would use online resources to start developing skills in Luta Livre.

Learning online is not as good as learning by going to classes. However, for many of us, it is the only way to access this information.

There are plenty of academies online that have created professional-grade training videos to instruct their students.

You can also find a variety of YouTube videos that you can access freely from highly skilled Luta Livre fighters. By watching the videos, understanding the explanation, and seeing the move in action, you can absorb the information and start to apply the techniques with your training partners.

There are also a few good Luta Livre instructionals available on bjjfanatics.com as well. Though there is not an extensive list there are a few highly rated instructional. Here are some examples!

One of the best things you can add to your grappling game from Luta Livre is submissions. Even if you are familiar with submissions from other grappling arts, these can help you have an advantage.

You will learn submissions that will catch your BJJ partners off guard. Nicolas Renier is an excellent teacher and an ADCC legend.

Another great instructional by Nicolas Reiner. This DVD will not only teach you to pass the guard, but it will also teach you to attack the guard. This is a great skill to learn, especially when rolling with BJJ players.

This aggressive passing style will help you out grapple the guard players at your school.

Luta Livre Camps Around the World

Whether or not you have access to a real Luta Live master in your region, you might enjoy the idea of using your next vacation to deepen your practice and skills.

In many countries, Luta Livre camps and workshops are organized where fighters can come together, learn new skills and practice, and compete with each other.

These types of programs are offered all over the world, featuring masters who will work with you in the discipline you wish to improve in.

Depending on your situation and location, you may consider a short program in an area of your country, or perhaps to Brazil itself, where it started.

By spending your next holiday in Rio De Janeiro at one of the original Luta Livre gyms, you will not only gain technical skills but the cultural context that the sport was born out of.