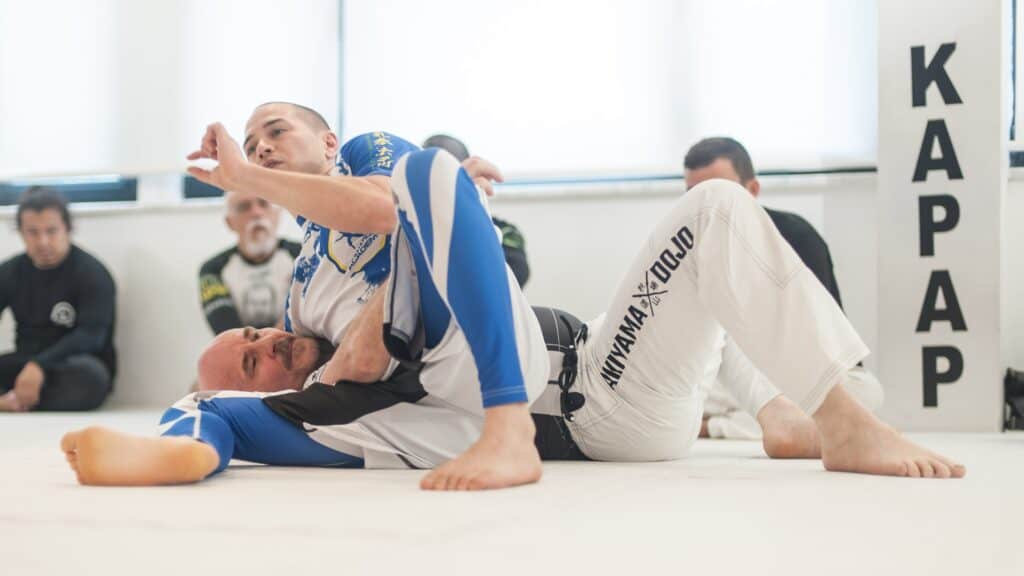 If you ask the best no-gi jiu jitsu coaches in the world what you need to master first, many would suggest you master escapes. It is common that during the first few months of jiu-jitsu you will be spending most of your time getting smashed by higher belts.

So naturally, learning how to escape from these bad positions is key. If you are starting with no-gi BJJ then you will need to learn escapes that do not require the use of a gi. When you start learning no gi escapes I would suggest focusing more on quality than quantity.

It is far better that you actually get good a just one or two no-gi escapes from each position than to try and learn too many at one time and never master it. After all, you are probably going to have a hard time escaping from a higher belt if your technique is bad.

On the other hand, if you really master one escape from each position, your technique in that escape can be purple belt quality even as a white belt. So learn one or two escapes from each of the bad positions in the BJJ positional hierarchy.

Learning No-Gi Escapes From The Bad Positions In Jiu-Jitsu

When you are just getting started in jiu-jitsu you are going to find yourself in undesirable situations more often than not. One of the first concepts that you will need to learn about is the BJJ positional hierarchy. Which is basically an overview of the best to worst positions in jiu-jitsu. This is true whether you train gi, no-gi, or both.

This is because you are able to attack your opponent and they are in a very bad spot to attack back. Because of this, the worst position is the exact opposite of the rear mount. That is the rear mount bottom.

The only position considered neutral is guard top and guard bottom and turtle top and bottom. Though I don’t personally see how turtle top is not better than turtle bottom.

I understand that each escape will not work for everyone or every time. There are many factors such as if they have under hooks or not, or if they have control of your hips or not. You will eventually need to add a few more to your toolbox over time. But for now, it is better to simply master a handful.

From side control, they will likely try to move to knee on belly and then mount or take your back. So your first chance of escaping once they pass your guard is likely going to be from side control. Don’t wait for them to get an even better position before trying to escape.

After all, if you are unable to escape side control then you will likely still get your chance to try and escape the mount or back. With that said, check out these no-gi side control escapes from Brandon Mccaghren’s Youtube Channel.

If your escape fails from side control your opponent will likely go for a submission, take your back, or move to knee on belly. So learning an escape from knee on belly that works in no-gi is likely your best chance to escape. Yes, they could try and take your back as well but do not worry, we will cover that later.

The point is that the more escapes that you have mastered from each position the harder it will be for a higher belt to submit or pin you. With that said, let’s look at this simple no-gi escape from knee on belly from Alberto Serrano BJJ’s youtube channel.

If your side control and knee on belly escape failed the next position your opponent is likely to move up to is the mount position. This is not a good place to be in because at this point they are in a very dominant position over you.

However, this does not mean that the battle is over. You still have a chance to escape the mount and get back into a better position. So naturally, the next thing you need to master is a few escapes from the bottom mount.

This video from Lachlan Giles and the Absolute MMA St Kilda – Melbourne Youtube channel goes into detail about how to think about escaping bottom mount.

If you fail to escape side control or bottom mount, your opponent might go for a back take. Back control is very likely the position your opponent wants on you. When someone has your back that means they have plenty of attacks whereas you have very few if any. Really you only have an attack if they misplace their feet.

For this reason, it is crucial that you master a few escapes from this position that works in no-gi. Here are 5 ways to escape from back mount in no-gi from Night Jiu-Jitsu. Of course, you might just focus on one or two at first.

If you learn a few escapes from all of the major positions your no-gi game will vastly improve. Though nothing is going to replace time in the gym, there are some good No-Gi Jiu-Jitsu instructionals that can greatly help improve your game.

Lachlan Giles does not often disappoint with his instructionals and provides more depth than most. So even if you are only focused on no-gi this is a great place to start. Lachlan Giles is one of the best and has taught some of the greatest no-gi grapplers on the planet.

Find Out More About This No-Gi Instructional Here!

Get Off My Legs Gringo by Craig Jones:

Many people know many of the most basic escapes but panic as soon as someone gets a hold of their legs. If this is you then you are not alone. This no-gi instructional is a great place to get started if wanna learn how to defend against leg locks.

If you got most of your escapes down but tap as soon as someone gets a hold of your foot then this might be the right no-gi instructional for you. Even if you don’t care to implement leg locks into your game you at least need to learn how to defend against them. Then you can at least escape and execute your game.

Find Out More About How To Defend Against Leg Locks Here!

If you want to advance fast in no-gi jiu-jitsu a good place to start is escapes. After all, you will probably be spending a lot of time pinned when you are just getting started. So learning a few escapes from each position will help your game immensely.

link to Best Jiu Jitsu Instructionals On Takedowns and Throws

Continue Reading
link to Is BJJ Good For Weight Loss?

Losing weight and keeping it off is a battle for so many people. One of the best ways that I have found to lose weight is to find a diet and exercise plan that you can stick to. A vital aspect of...