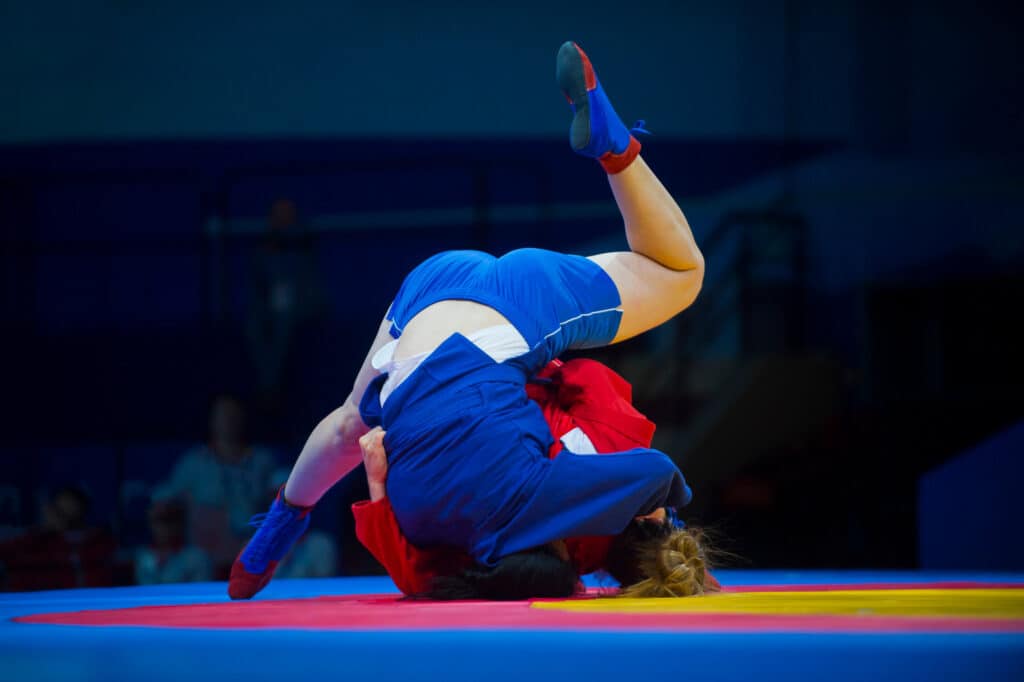 Sambo and Judo are often confused with one another, and understandably so. In addition to some visual resemblance, there are overlaps in the techniques in each fighting style, especially when it comes to grappling. In fact, sambo was heavily influenced by judo from the start. But what are the differences between judo and sambo?

Sambo is different from Judo in terms of the origin, ranking system, and competition uniform. And while there are technical similarities between these two combat sports, there are several distinctions in terms of uniforms, the ranking systems, what’s allowed, and the various ways to win a match.

Read on for an in-depth discussion on the key differences between Sambo and Judo.

The Primary Differences: Sambo vs. Judo

The main distinction between the two is that Judo is older than Sambo. Judo was formulated from Japanese jiu-jitsu, whereas Sambo was adapted from different fighting styles, including Judo itself, Greco-Roman wrestling, Karate, Russian Wrestling, and other martial arts.

Sambo came about in the early 1920s, developed by the Soviet Red Army to improve their hand-to-hand combat. In fact, its original purpose is captured in the name. “SAMBO” is short for SAMozashchita Bez Oruzhiya, a Russian phrase that translates to “self-defense without weapons.”

Viktor Spiridonov and Vasili Oshchepkov were the joint pioneers of Sambo. Interestingly, Oshchepkov had trained in Judo for several years under Kano Jigoro and earned a second-degree blackbelt. With his extensive knowledge of Judo, he set out to create a superior martial arts style by combining some of the most effective judo techniques other moves from karate, Russian wrestling, and other styles.

To achieve that, Spiridonov combined moves from Greco-Roman with others from various wrestling styles. The result was a grappling technique that aimed to use opponents’ power against them by deflecting their aggression.

Oshchepkov’s style was very similar to Catch Wrestling and was more explosive than Spiridonov’s style. However, their styles later merged to form Sambo as we know it today. This merging was a result of a joint effort to improve the Red Army’s hand combat skills.

Both men were hired in 1923 as a part of a specialized team of martial arts instructors assembled to train the Red Army at the NKVD physical training center Dinamo.

About a decade later, this team of instructors created the formal outline for a unique hybrid fighting style composed of moves from different martial arts disciplines. This hybrid style is what developed into Sambo as we know it today.

Even though Sambo emerged in the early 1920s, it wasn’t until 1938 when the USSR All-Union Sports Committee officially declared it a legitimate sport. Today, it’s one of the most renowned combat sports in Russia and other parts of the world.

Judo’s country of origin is Japan. It was developed in 1882 by a Japanese athlete and educator named Kanō Jigorō. Before then, Japanese Jiu-Jitsu (also known as Tai Jitsu) had existed in Japan for hundreds of years.

Jigoro Kano studied this form of jiu-jitsu and used his knowledge to develop Judo. In fact, Modern Judo was initially known as Kano Jiu-Jitsu in many combat sports circles despite the founder only terming it as Jujitsu.

In Sambo, the color of your belt doesn’t reflect your rank. In Judo, it does. Also, Sambo practitioners wear shoes to the mat, whereas judoka practice barefoot.

In competitions, Sambo practitioners need to wear either blue or red outfits. The sambovka/Kurtka somewhat resembles a Judogi belt and top, but it has shoulder straps, shorts (wrestling style), shoes, and belt loops that match the color of the uniform.

Characteristically, Sambo uniforms don’t reflect the wearer’s rank. The main reason you may see an athlete in a red or blue set is that regulations require each competitor to have both sets. This way, you can wear red and your opponent blue to make it easier to distinguish between you two as you grapple on the mat.

Judogi (the Japanese name for Judo uniform) comprises three parts cut from various fabrics: Uwagi, Zubon/Shitabaki, and Obi. Uwagi are relatively heavy Jackets made of heavy-duty cotton or a cotton blend, while Zubon are lighter pants made of canvas. Obi refers to the cotton belt worn on the waist, and its color denotes your judo rank.

Speaking of colors, you can only wear blue or white judogi in official competitions. Except for the belt, the color of your uniform isn’t a reflection of your rank. Instead, it’s a way to make it easier to tell competitors apart.

The entire Judo belt is colored to reflect your rank, while Sambo belts retain their original red and blue colors with stripes used to denote competitors’ ranks. There are also variations in the rank represented by each belt/stripe color (white is a perfect example of this).

Until recently, Sambo used a rating system similar to many wrestling ranking systems in Russia.

In 2018, the International Sambo Federation approved the use of a color ranking system. Seven rankings were established, ranging from a level one rookie to a level one master as outlined below:

Instead of having the entire belt colored based on your skill level, the regulatory body opted to attach color stripes to the belt. So, Sambo belts retain their original blue and red colors, with the only difference being the addition of the stripes.

* I should quickly note that the judo belt system might vary a bit from country to country, so it could be subject to change depending on where you live.

In Judo, practitioners’ ranks are denoted by their belt color. Broadly speaking, there are two rank categories. One category is designated for those whose competency is worthy of a blackbelt, and the other for dan and kyu grade holders. Dan grade holders are collectively referred to as Yudansha, while kyu-rated practitioners are known as Mudansha.

The ranking system described above was first introduced by the father of Judo, Kano Jigoro, in 1883. However, modern Judo has evolved from the one originally devised by Jigoro.

Novice practitioners are awarded the sixth kyu rank, denoted by a light blue belt. Once they pass the elementary competency level, they gain promotion to the fifth kyu and start wearing a white belt to reflect that. They wear this white belt through the fourth kyu.

The other three grades are third kyu, second kyu, and first kyu, and are all denoted by brown belts in senior competitors and purple belts in junior judoka.

Once Judoka attain their first kyu, they’re promoted to first-degree black belt. There are different black belt ranks, too, bringing the total number of dan ranks to 10, as shown in the table below.

Sambo Vs Judo As A Sport

At first glance, Sambo and Judo are very similar in terms of technique. But with closer examination, you notice a few differences.

Another difference in what’s legal is that Judoka can only attack the elbow joint when looking to submit their opponent. Sambo doesn’t have such a restriction and generally has fewer grip restrictions than Judo. It also gives practitioners more time to work on the mat than Judo.

There are also differences in the ways to win in both types of combat sport. The most apparent distinction is the way pinning your opponent contributes to a win.

In Judo, you get an outright win if you pin your opponent for 20 seconds or more. In Sambo, pins only add to your point tally, meaning you can win by simply pinning your opponent.

Here’s a comparison of the various ways to win in each sport:

As you see in the table, there are two types of throws:

That does it for today’s discussion. Hopefully, this comparison has cleared the air regarding the differences between Judo and Sambo and will help you choose the most suitable grappling style.

Remember that neither style is superior to the other in terms of effectivenessーit all comes down to proper technique and execution. Cheers!