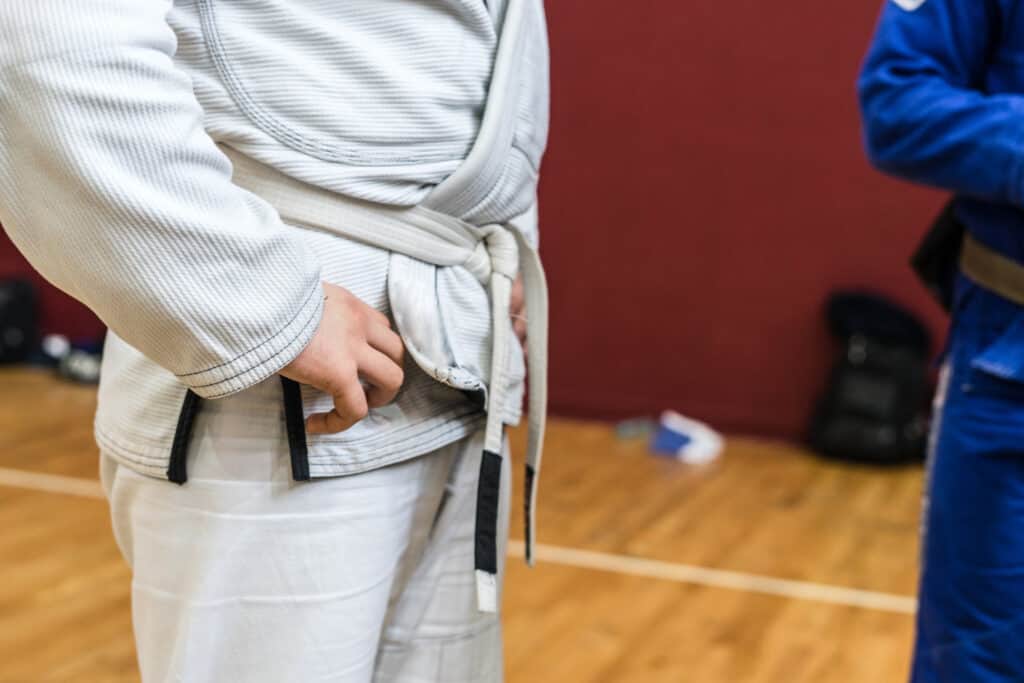 If you are looking to get into martial arts, then you might be considering Brazilian jiu-jitsu. After all, BJJ is currently the fastest-growing martial art in the world. But before joining a class you might be wondering what belt you start with in BJJ?

Like many other martial arts, you start BJJ with a white belt. The white belt is the starting place in BJJ and you do not need to do anything besides showing up for class. After you have developed some skills your professor might promote you to blue belt.

Why You Start With A White Belt In BJJ

The reason you start with a white belt in BJJ is pretty simple. It signifies that you are a beginner in BJJ. The belt system in martial arts was started by Jigoro Kano who is the founder of Judo.

As you might already know, BJJ was adapted from judo originally. Brazilian Jiu-Jitsu was created when Judo practitioner Mitsuyo Maeda traveled to Brazil and taught the Gracie family back in 1925.

The Gracie family adapted the judo techniques to create what is now known as Brazilian Jiu-Jitsu. However, the idea of having a belt system stayed the same.

The BJJ and the judo belt systems are not the same. Meaning they do not go in the same order and they do have different belt colors. In fact, in Jigoro Kano’s day, he simply started with white and black belts. That said, judo and BJJ both start with the white belt.

Simply put, you start with a white belt in BJJ to signify to your professor and classmates where you rank in class. Some professors will also give out stripes on the BJJ belt to help them keep up with where they are on their journey with their current belt.

Typically, you will receive 4 stripes on your belt before being promoted to the next belt. But it is up to your professor at the end of the day when you actually get promoted.

Order Of Belts In BJJ

As we have already started you start BJJ with a white belt. This stage typically takes 1-3 years of practice and is the place where you really focus on the fundamentals. People who move from white to blue belt in a year’s time often are naturally gifted and put a lot of time into their training.

They might also spend extra time taking private lessons with their professor or learning off the mats through BJJ instructionals and other resources. That said, most would say that 2 years is a pretty average amount of time most would spend as BJJ white belts.

After the white belt is the blue belt. Blue belts are still typically considered beginners but that does not mean they are not tough. After all, there are not many sports that you can practice for years and still be considered a beginner. It is normal to get your blue belt after about 2 years and will usually take another 2-3 years to become a purple belt.

The blue belt is the belt where you really start to understand the fundamentals and start to develop your BJJ game. For many people, this can be the most frustrating belt to stick it through. In fact, it is often a joke in the jiu-jitsu world that so many blue belts quit.

I think this is because you still have so far to go to black belt but you have been training long enough for the newness of BJJ to wear off. This is why you should not focus too much on your belt rank and simply enjoy the journey of BJJ.

After a blue belt, you are promoted to a purple belt. It typically takes 4-6 years of consistent training to become a purple belt in BJJ. At this point, you are considered an advanced belt and are able to teach some classes at some academies.

This might be the beginner class or perhaps the kid’s classes. Either way, you have been training for quite some time now and have probably developed some pretty good skills. This is also a belt that many people never make it through. After all, you still got years before becoming a black belt but have put a lot of time in.

It takes most people 6-9 years to become brown belts in BJJ. Most of the time people who make it this far stick it out to black belt. After all, you are so close and have put so much work in. Brown belts are very skilled and are able to teach at many schools.

Very few people ever make it to black belt in BJJ. BJJ black belts are very rare and have put a ton of time and dedication into their art. It takes most 10-12 years of consistent training to become black belts.

There are belts after black belt but at this point, you are considered a master. Some of the higher belts above black are simply there to honor the years that some BJJ masters have put into practice.