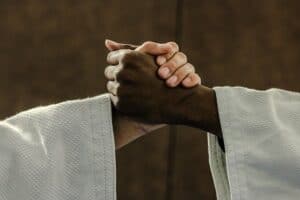 There are tons of different martial arts from across the world. Even if you do not personally practice martial arts you have probably seen the movies where there is typically a martial arts teacher and their students. It can be confusing on what the proper name of the instructor should be depending on the style. Sometimes it’s master and sometimes its Sensei or professor. In this article, we are going to answer the question: What do you call a judo instructor?

The proper name of a teacher or instructor in judo is Sensei. Translated into English the word Sensei simply means before life. Or more simply put the one who has gone before you. The basic concept is that they started the path before you and will be a guide for you along your journey.

Generally speaking, your Sensei has likely dealt with or has already experienced the problems you will face in judo. Because of this, they can help you through the struggles that they have already overcome. That said, the word Sensei has been used in more areas than just martial arts. In Japan, the word Sensei might be used for someone who is a spiritual leader or guide.

Why Do You Refer To A Judo Instructor As Sensei

A judo Sensei is a person that has set out on a journey similar to the one you are on but is several steps ahead of you in their journey. Because of this, they will be able to see the problems and obstacles you will likely run into as well. The hardest journey is often the one traveled for the first time.

Think about the first people who set to explore throughout the western United States during the Lewis and Clark Expedition. They set out before anyone else without knowing what obstacles they would face. They had no map and had to learn the path themselves.

The next group who would set out on this journey would have an easier time because someone had already gone out before them. In many ways, you could say that Lewis and Clark were the Sensei of the next group of people who went after them.

What Qualifications Does Someone Need To Be A Judo Instructor

Meaning that they can teach without the direct supervision of a higher ranking Sensei. Typically, one who is a 3rd Dan black belt might only be able to promote a student up to 1st Dan black belt. It will typically take a student around 4-6 years of training to become a black belt in judo. That is to reach 1st Dan in judo.

At this level, one might be considered qualified to teach under certain circumstances. That said, they would likely be under the supervision of a higher-ranked Sensei. After all, someone who is a 1st Dan belt is not qualified to promote a student to a black belt.

Someone who is at the brown belt level may be able to assist a higher-ranked Sensei or teacher during class. That said, they would not be considered the teacher. But rather an assistant teacher who is there to help the Sensei to instruct the lower belt students. This is something that someone who inspires to be a teacher in the future might consider when they reach the brown belt level.

How To Find A Good Judo Teacher

Finding someone who is qualified to teach judo is one thing, but finding a great Sensei is another. Some people might have been great competitors but it takes a special person to become a great teacher. That said, the first thing you should do is find out what judo academies are available in your area.

Typically, the instructor will have a bio where you can learn more about who there are. This can be a good way to find a teacher to who you can better relate. Then simply, do a little research on who there are and what their current rank is. Next, check out their reviews and see what other people are saying about them.

It is very likely that most academies will at least offer a free class or perhaps a free week or two. Go check out the academy to get a good picture of what the culture is like. Of course, a good teacher can always have a bad apple or two, but the students are often a reflection of their Sensei. The way the students teach you and interact with each other will tell you a lot about the academy.

Then, of course, see what feel you get from the instructor themselves. Are they warm and inviting or is there a sense of ego at the academy? Typically at a healthy school, you will be greeted by the students as well as the Sensei. The point is to simply go check out some free classes and see what you think. If you go there for a free week and don’t feel welcomed then it’s probably not the best place to go.

If there are multiple academies near you there is no need to rush this process. Go check out a few other schools as well before committing to one. It is easier to get an idea of where you want to go by checking out a few options.

You might also want to consider why you want to join in the first place. Are you the athletic type who wants to compete in judo? Or perhaps you want to learn judo for self-defense and exercise. There really is no right or wrong answer, but some schools might have different priorities.

At one academy they might have a sole focus on sport judo and competition. Whereas at another academy, they might spend some time teaching self-defense. The main focus of the academy can make a crucial difference in where you might choose to go. Other considerations might include proximity to your home or work and compatibility with your schedule.

In judo, you will typically address the teacher as Sensei. The idea is that this person is further down the path than you are and can help to guide you. At the end of the day, you are always on the learning path as a judoka. That said, typically a qualified judo instructor or Sensei will hold a rank of at least 3rd Dan black belt.

To find a great judo instructor, you might need to do some research. Look up reviews online and read the info on their websites. Check out some schools and get feel for whether or not it will be a good fit. Don’t worry about rushing in to join an academy. Go check out a few places in your area before joining. Lastly, consider what the values and goals of each academy are. Do they align with what you are looking for? If so, you might have found your Sensei.