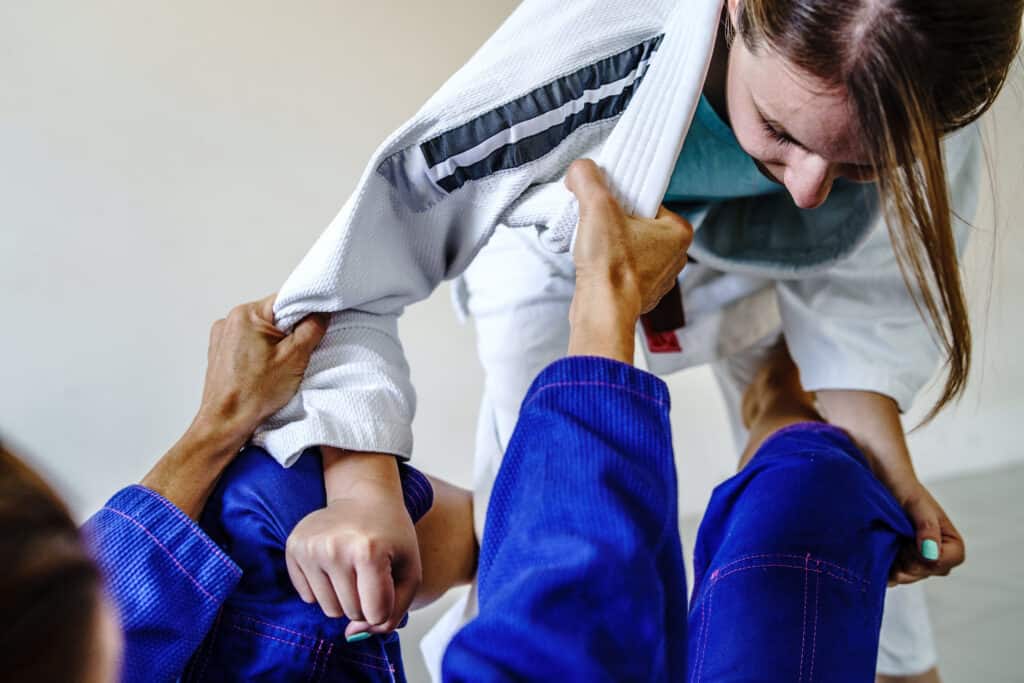 There’s some confusion about the relationship between BJJ and Gracie Jiu-Jitsu (GJJ). Many people, even some experts, seem to think that they’re the same or even different names for the same thing. So, is there a distinction between the two?

The main difference between BJJ and Gracie Jiu-Jitsu is that many BJJ schools focus more on sport while GJJ focuses on self-defense. Both BJJ and GJJ come from the same origin and art and were developed by the Gracie family. But Gracie jiu-jitsu is stricter about keeping to the original style passed down by the Gracie family more than a BJJ school has to.

This article will discuss the main differences between BJJ and GJJ, providing detailed descriptions of both and what you can expect from each discipline.

The Differences Between BJJ and Gracie Jiu-Jitsu (GJJ)

BJJ and GJJ are often used interchangeably to describe what are, but there are usually some differences. While these terms aren’t 100% the same, they’re closely related to one another. Technically they are both types of jiu-jitsu that originated from the Gracie family.

The reason for the big split in focus is that sport BJJ and other forms of submission grappling have become very popular. There are now professional jiu-jitsu athletes who focus full time on sport jiu-jitsu. Sport jiu-jitsu is getting more and more popular every year. As a result, more and more BJJ schools are starting to put more focus on the sport that self-defense.

After all, there are things that you might do in a competition that you would never want to do in a real-life situation. Though Gracie jiu-jitsu is not against the sport of BJJ, they do want to make sure that the original intentions of the art do not get lost in the sport.

Here’s what you need to know about how BJJ and GJJ differ:

Aim of Gracie Jiu-Jitsu Vs. BJJ

GJJ aims to teach self-defense, while Brazilian Jiu-Jitsu (BJJ) might focus on self-defense but may or may not focus more on sport jiu-jitsu.  Sport BJJ aims to win matches in competitions by using submissions or points.

On the contrary, GJJ aims to teach self-defense. The techniques are designed so that you can use them in a practical way in a real-life situation. This is not to say that you would want to pick a fight with a high-level BJJ competitor assuming that they don’t really know how to fight.

In the same way, you would not want to pick a fight with a pro boxer either. Sure boxing is not created for self-defense but they have skills that make them very dangerous. The difference is that when in competition a BJJ player does not need to worry about getting punched, kicked, bitten, or whatever else. So naturally, there are some techniques that will work in sport but not in real life.

Gracie jiu-jitsu does not want BJJ to completely go down the same path as its predecessor judo did where the art is almost completely focused on sport.

GJJ uses “Gracie Filters” to determine suitable techniques. Usually, GJJ emphasizes energy-efficient moves that all individuals can do, regardless of their weight, height, or strength. The focus is on techniques that work in real life and can be used by people of various sizes and athletic backgrounds.

BJJ however, might focus on techniques that only work in sport or for an athlete who has the physical capabilities of performing the technique. It’s very much about an individual’s specific attributes relative to the opponent’s rather than general body mechanics for everyone involved in the art of BJJ.

GJJ expects you’ll face untrained, stronger, bigger opponents. Because of that, its techniques are designed to be used against individuals with little to no knowledge of grappling.

The focus is on making your technique effective against these kinds of opponents, even if they are much larger than you are.

On the other hand, BJJ expects you’ll grapple with trained opponents who know very well how to defend themselves. If you are a competitor then you are going to be focusing on competing against someone your size.

GJJ moves are more applicable in a real-life altercation since they use energy-efficient moves that all individuals can do. It is thought that techniques with less force or movement behind them tend to be more effective in self-defense.

However, suppose a technique needs a lot of strength and power to be effective. In that case, bigger, stronger, and more athletic people will easily defend themselves from it.

In contrast, BJJ moves are suitable in competition for various reasons, which I’ll explain below:

For example, no strikes of any kind (punching or kicking) are allowed in competitions. This is a stark contrast to self-defense scenarios and why GJJ techniques are more applicable to self-defense than BJJ.

As previously mentioned, GJJ emphasizes general body mechanics when applying techniques, while BJJ is very much about individuals’ specific attributes compared to their opponent’s.

GJJ is better for smaller individuals who may face bigger opponents in self-defense situations. However, BJJ is the better choice if you aim to win competitions rather than learn self-defense.

Whether in self-defense or sport, size and strength does matter in jiu-jitsu. Just because you can learn techniques that might work against a larger untrained opponent does not mean you should not try and become a stronger more athletic martial artist.

That said because of genetic factors, not everyone is going to be able to have the same athletic ability as a top-level heavyweight male BJJ player. So even though you should get as strong as you can, if you are worried about being bullied or attacked by people larger than you then you should focus more on learning self-defense jiu-jitsu. You can find this at every Gracie jiu-jitsu school but not at all BJJ schools.

Tips on Mastering GJJ and BJJ

Now that we’ve discussed the main differences between BJJ and GJJ, it would help to understand how to master them.

In that regard, here are some guidelines to help you become better at each of these martial arts:

GJJ techniques are about body mechanics and proper movement, so you need a teacher and classmates to learn from.

In addition, you could get some valuable tips by reading books like Gracie Jiu-Jitsu by Helio Gracie. The Grand Master of GJJ, Helio Gracie, explains the basics of this martial art in an easy-to-follow format, providing over 1000 illustrations to make each technique easy to understand.

For the best results, I recommend using the book to complement your regular training. Work through the book with your trainer and have them show you the proper form for each move.

Don’t Be Overconfident in Your Abilities

Self-defense situations can be unpredictable. There will be times when your technique doesn’t work because the opponent is stronger than you are, bigger than you, or has more training in grappling than you do.

GJJ practitioners need to recognize this reality instead of developing over-confidence in their abilities, which often leads to underestimating an opponent and worsening the situation.

Be Willing To Learn From Others

Learning the GJJ philosophy and techniques is great, but if you aren’t open to learning from others, then it’s useless. Every individual has a different take on the techniques and philosophies of GJJ. Other people will see faults in specific movements or positions that you may not realize yourself.

Thus, you should be open to learning from everyone, allowing you to improve your art skills and knowledge.

For those who want to be better at grappling for BJJ competition, the following tips can help:

Train With Experienced Teachers and Partners

One way to improve your skills and develop new ones is by practicing with partners whose skill level is just out of your reach.

By doing that, you learn from martial artists who are more experienced than you and can easily pinpoint the areas you need to improve.

BJJ practitioners can also learn a lot by watching competitions and world champions. You can improve your ground game by watching them closely, learning about their techniques, and seeing how they apply them to win tournaments.

Learn Online In Addition To Your School

Your main focus should be doing to BJJ class. But you can also learn a lot these days from some of the best BJJ teachers in the world online. Focus on videos and instructionals that focus on the basics before moving on to advanced techniques.

Even if you train in a class setting, analyzing your game is essential to improve it after the session. You can do this by watching footage of yourself or asking someone else to review it with you so that you can find out your strengths and weaknesses.

After all, knowing what mistakes you’re making is half the battle when it comes to fixing them.

Gracie Jiu-Jitsu is an effective martial art, especially in terms of self-defense. Gracie Jiu-Jitsu’s tactics allow a smaller person to defeat a larger opponent or attacker using energy-efficient techniques rather than physical power.

That said, what matters more for self-defense is what you do after you learn a technique.

Suppose you want to use your skills in a real-world situation. In that case, you’ll need to practice the techniques under pressure so that they become natural movements done without thinking. This way, it’s more likely that you’ll choose the correct method for the situation when it counts.

Is Brazilian Jiu-Jitsu Good in a Street Fight?

Brazilian Jiu-Jitsu can help in a street fight because it provides excellent ways to stop and immobilize your attacker. In addition, BJJ Techniques, such as the triangle choke and kimura arm lock, may help subdue your attacker faster, ending the fight altogether.

However, BJJ may not help much in a street fight if you use BJJ techniques that only work in competition. So you should at least learn to recognize what you should never do in self-defense that you might do when rolling. That said, the best form of self-defense is to avoid fighting altogether when it is possible.

For more on this check out my article: Is BJJ Good For Self-Defense Here!

If you’ve been wondering about the difference between Brazilian Jiu-Jitsu and Gracie Jiu-Jitsu, I hope this blog post has provided the information you need.  In a nutshell, GJJ focuses on self-defense while BJJ focuses on competitive combat, which means they teach different moves to their students.

Nonetheless, It’s crucial to know your goals before deciding the type of jiu-jitsu you want to learn, as they both come with benefits. In addition, some BJJ schools still do have a focus on self-defense. So maybe you could find a school that takes both self-defense and competition very seriously.