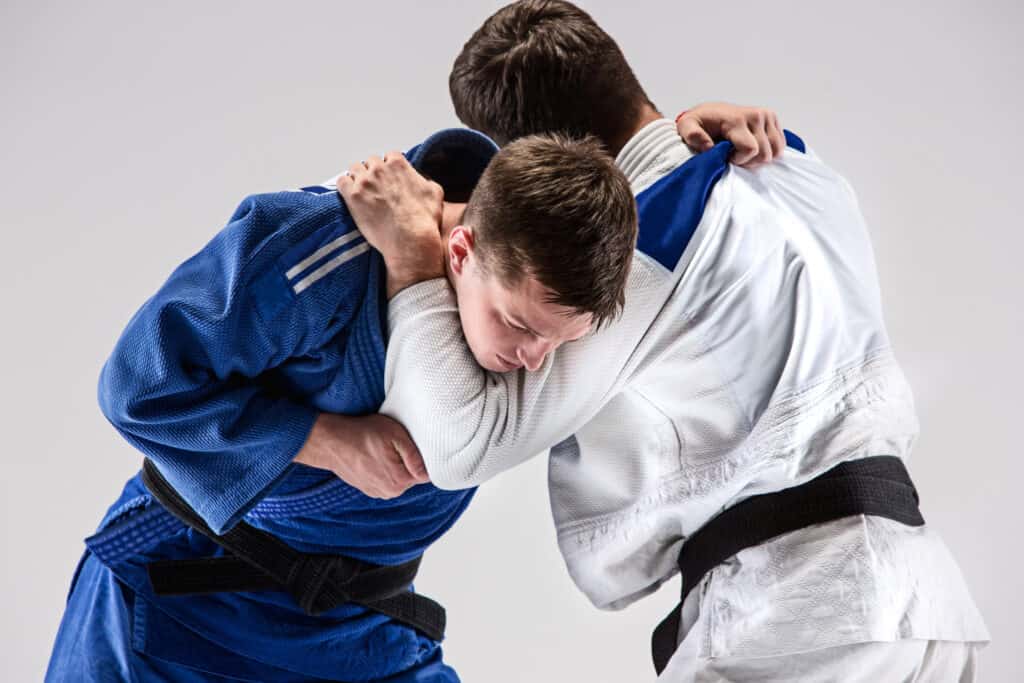 People take various martial arts for all different kinds of reasons. Some people are looking for a way to defend themselves, whereas others are trying to learn a skill for a combat sport. Or perhaps they are simply looking for a fun way to get more exercise. One of the most popular martial arts and sports in the world is judo. But what is the main focus of judo and is it the right martial art for you.

The main focus of judo is to throw your opponent to the ground unto their backs scoring an ippon and thus winning the match. You can also win by scoring two lesser throws, submitting, or pinning your opponents back to the ground for 20 seconds.

Of course, this would be the main focus of Olympic or sport judo. Many people might take judo for various other reasons. So the main focus of why someone would want to learn judo can be different from person to person. But at the end of the day, the main focus of judo is quickly immobilizing your opponent via throw, submission, or pin.

The Orignal Focus Of Judo

Judo was founded by Jigoro Kano and is considered a modern martial art. Jigoro Kano was an educated and respected man from Japan who was a student of Japanese jujutsu. Jujutsu had been around for hundreds of years but was not looked highly upon by many of the higher and upper middle class Japanese.

As Japan was transitioning into a new age, many did not see the need for an outdated warrior class. In fact, during this time many people who practiced jujutsu were often thought of as rough around the edges types.

One of the main focuses of judo was to make it more relevant to the modern age. So Jigoro Kano refined many of the techniques and put more focus on what was most effective and efficient. His overall goal and focus was to make judo a global sport for anyone and every to enjoy.

He thought of judo as not just something that was needed for times of war but for all areas of life. Judo actually means the gentle way. I think Jigoro Kana thought about this as not just a way of combat but a way of life. His focus for judo was to use it to teach physical education, philosophy, sport, and of course a form of combat.

The Focus Of Sport Judo

Eventually, judo became a sport practiced all across the world. Today it is one of the few combat sports in the Olympics. Though it still carries many of the original attributes, judo becoming a popular sport has certainly changed the focus of many dojos today.

Of course, there are still dojos that still know the full art, many are totally focused on the sport. In early judo, there was a lot more to the curriculum than what you will find at most judo schools today.

For example, many people do not realize that much of the ground fighting seen in today’s Brazilian jiu-jitsu was once a larger aspect of judo. In fact, BJJ is an offshoot of judo. One of Jigoro Kano’s students Mitsuyo Maeda was the judoka who taught the Gracies judo in the first place.

However, in sport judo, there is a limited amount of time you can fight on the ground. So naturally, the emphasis of Newaza ( ground fighting ) compared to early judo is drastically different. In fact, Newaza was a major focus of early judo but is rarely emphasized in today’s judo.

That is with the exception of Kosen judo which is very rare to come across today. That said, whether for the better or worse, judo becoming an Olympic sport has changed the focus for many judokas.

What Is a Judokas Main Focus In Competition?

The main focus on sport judo is to of course win. To do this judokas focus on throws, pins, and submissions. A judokas main focus is to typically win via a throw. If you throw your opponent straight down onto their back then you automatically win. If you get 2 lesser throws then you would also win. So really, throws are probably the main focus of judo.

Another major focus of judo is to win via submission. If a judoka can submit their opponent through perhaps a choke or armlock then they will also win the match. Lastly, judokas focus on pinning their opponent’s shoulders to the floor. If they can do this for 20 seconds they win.

Does Judo Focus On Self-Defense?

There are certainly judo dojos that focus on teaching self-defense. That said, most judo schools today do not put a heavy focus on self-defense. Of course, this is a generalization but most dojos today are focused more on the sport of judo than judo for self-defense.

Often these schools will be a mix of judo and jiujitsu. That being said, even sport judo can be beneficial for self-defense. You simply need to be able to identify what you should do ( and not do ) in sport vs in real life. Some things you do in competition could get you hurt on the street. Likewise, you could severely injure ( or worse ) someone using judo in real life especially on concrete.

So even though most judokas today do not focus on self-defense, they are likely capable of being able to protect themselves against an unarmed attacker. I mean boxing is also a sport that is not geared towards self-defense, however, most people would regret picking a fight with a professional boxer. In the same way, you probably would not want to pick a fight with a judoka.