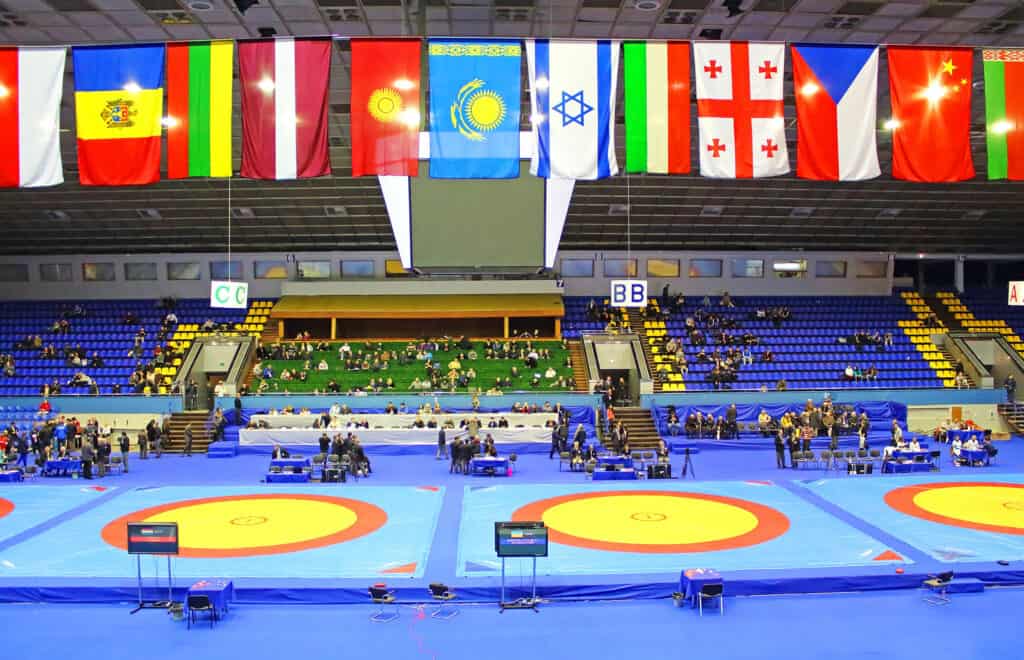 Every four years, Olympic athletes show off their skill at Greco-Roman and Freestyle wrestling. In arenas, gymnasiums, and grass fields, local wrestling competitions showcase their traditional wrestling styles. We find wrestlers and wrestling fans around the globe, but which country is best at wrestling?

The country best at wrestling is Russia. It remains a wrestling powerhouse piling up medals at international events. Russia holds the most medals in wrestling when you combine both Olympic styles of wrestling by a pretty large margin.

Keep reading to learn why Russia is hailed the best at wrestling and which other countries have earned honors for their worthy efforts in the sport.

Why Russia Is The Best Country at Wrestling

Several ways determine which country is best at wrestling, which involves personal opinion as much as statistics. But when you look at Russia’s wrestling history and its current crop of wrestlers, it is not hard to see why Russia is the world’s best country at wrestling.

In belt wrestling, the combatants both wear a belt or girdle around their waists. Each takes hold of the other’s belt. The objective is to throw your opponent or to lift him off the ground.

Belt wrestling is the oldest recorded wrestling style. A statue found in Khafaji, Iraq and dated from around 2,600 BC shows two wrestlers holding each other’s girdles. In the Epic of Gilgamesh, dating from 1,700 – 2,000 BC, Enkidu and Gilgamesh belt wrestle each other.

Kyrgyzstan, Uzbekistan, and Tajikistan were all part of the Soviet Union, and these techniques influenced Soviet and later Russian wrestling. So Russian wrestling incorporates moves from the most ancient grappling traditions. Because of this wrestling is deep into the culture of wrestling.

American wrestlers focus on strength and on hard work, which is undoubtedly essential, while Russian wrestlers train with kettlebells and free weights. But Russians concentrate more intensely on strategy and technique. While they also work as hard as non-Russian wrestlers, they work smarter as well.

Some of the greatest Russian wrestlers include:

Which Country Holds the Most Wrestling Championships?

The Soviet Union dominated the wrestling world like it ruled the Eastern Bloc. The Soviet Union included current wrestling strongholds like Armenia, Azerbaijan, Ukraine, and Uzbekistan. To this day, no country has won as many World Wrestling Championships medals as the Soviet Union.

Japan has won more gold medals than Russia, but Russia has won more awards overall. With their long history of traditional wrestling styles like Judo and Sumo, the Japanese are formidable competitors. But when you take into account the Soviet wins, Russia comes out on top.

Special honors go to Bulgaria. With a population of just seven million people, Bulgaria holds its own against much bigger countries. Pound for pound, Bulgaria might be the wrestling capital of the world.

Which Country Has the Most Olympic Wrestling Medals?

The Soviet Union was a perennial powerhouse at the Olympic Games. While the Cold War meant American and Soviet athletes battled fiercely for personal glory and national pride, today, the United States sits at the top of the freestyle wrestling medal count.

Japan, ranked at #14, has fewer Greco-Roman medals than the United States, but its 13 Olympic awards include four gold, six silver, and three bronze. Turkey (#6) has more Greco-Roman awards (24) than Russia ( #5) and more wrestling medals overall, at 63 to Russia’s 56.

Though Turkey has won six Greco-Roman silver medals while Russia has only earned three, Russia holds twelve gold medals to Turkey’s eleven. The battle between these two wrestling titans remains close. The Tokyo Olympics could easily see Tokyo triumph over Russia and Japan and rise to the #3 ranking.

Is Russian Sambo a Form of Wrestling?

“SAMozaschita Bez Oruzhiya,” Russian for “self-defense without weapons,” is a highly respected grappling style that originated in the Soviet Union. Today students throughout the world practice and compete in Sambo competitions. Though sambo incorporates wrestling it is not wrestling but rather a martial art that focuses on a lot of grappling.

Viktor Spiridinov, a Red Army instructor with solid wrestling and Jiu-Jitsu training, was the forefather of Sambo. Spiridinov suffered an arm injury in World War I, and weaker or wounded practitioners could use his “Samoz” style. It concentrated on movement and speed rather than brute strength.

Another Red Army trainer, Vasili Oshchepkov, also influenced Sambo. Oshchepkov trained in Japan and was the first Russian to earn a black belt in Judo. Army recruits who worked with both men combined their styles to create what became Sambo.

But as relations between the Soviet Union and Japan deteriorated, Stalin grew increasingly suspicious of Russian spies. Oshchepkov died in a gulag, and Red Army trainers were discouraged from incorporating Japanese techniques into their fighting styles.

Were it not for the efforts of Oshchepkov student Anatoly Kharlampiyev, Sambo might have been snuffed out by Stalinism. Kharlampiev presented Sambo as a Russian style that originated in the Soviet Union, and by 1938 Sambo was the Official Martial Art of the Motherland and the Soviet Union’s official combat sport.

There are countries with more Olympic medals than Russia. Despite this, Russia’s strength across the wrestling spectrum wins the title. Of course, if you combine the wins from Russian and the Soviet Union then you can easily see it has dominated wrestling for some time.