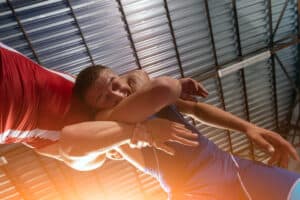 Competitive wrestling is a modern and ancient sport that dates back thousands of years to the Olympic Games of ancient Greece. Today, wrestling is contested in practically every nation on earth. If you are new to the sport, you have likely noticed that many wrestlers have a deformity of the ear, known as cauliflower ear, and wondered why this is.

Wrestlers get cauliflower ear because the constant clashing and rubbing causes their ears to be repeatedly mashed. Over time, injuries to the ear can cause a thin layer of skin to become detached from the cartilage. This causes interference in blood flow to the ear, resulting in deformity.

In this article, we will be examining the phenomenon of cauliflower ear from a clinical perspective and explaining why it is that wrestlers are so disproportionately affected by it. We will also provide insight into the treatment options and medical procedures available to manage and prevent cauliflower ear.

I should first note that this is for informational purposes only. I am not a doctor and this is not to be taken as medical advice. If you have any worries or symptoms of cauliflower ear call your doctor for medical advice.

That said, cauliflower ear is a medical condition in which the outer ear of an individual becomes hard, swollen, puffy, and disfigured, resembling a cauliflower. The number one cause of this deformity is a traumatic impact.

Repeated traumas cause the thin layer of skin, which surrounds the ear to become detached from the cartilage, consequently inhibiting the cartilage’s ability to receive an adequate supply of blood flow and nutrients.

The early signs of ear injury are redness, swelling, bruising, throbbing, ringing, and a burning sensation. These symptoms indicate the early onset of what can later develop into full-blown cauliflower ear if not treated. Unlike most injuries, this will not heal on its own, and medical treatment should be sought.

The types of impacts which cause cauliflower to occur commonly include:

So Why Do Wrestlers Get Cauliflower Ear?

Due to the close contact and extreme physicality of wrestling, athletes partaking in the sport are at a high risk of developing cauliflower ear over time. When engaged in a grappling exchange, it is common for a wrestler’s ear to violently rub up against their opponent’s body, forcing their ear to fold, twist, and contort. The constant slamming and head locking leave the ear vulnerable to torsion.

These repeated micro-traumas to the ear can cause small blood clots to form, impeding the flow of blood to the ear. It can also cause the skin to detach from the cartilage as described above fully. Some wrestlers will experience cauliflower ear on both sides, while others may only experience it on one.

A study conducted by the Journal of Sports Science & Medicine showed that of 411 wrestlers selected at random, a staggering 44% were found to have cauliflower ear. This stands as proof that cauliflower ear is extremely common amongst wrestlers.

Many wrestlers willfully ignore treatment for their cauliflower ear because it is seen as a sign of veterancy, experience and displayed with a sense of pride and honor in certain wrestling communities.

Why Wrestlers Should Wear Headgear

The best way to prevent yourself from developing cauliflower ear is to always wear headgear like helmets, caps, and earmuffs, specifically designed for wrestling competition. These ear protectors come in different styles and are typically tight-fitting, as well as adjustable.

The great thing about wrestling headgear is that it can almost completely eliminate the risk of sustaining an injury to the ear during competition.

The drawback to it is that some wrestlers find wearing headgear to be distracting and uncomfortable. This preference for comfort can sometimes compel them to neglect the headgear part of the time. However, in order for headgear to be effective, it should be worn ALL of the time.

While certain contests require headgear to be worn, not all do.

If you are new to the sport and are looking to purchase quality wrestling headgear, as we strongly recommend all to do, the Cliff Keen Fusion headgear is the top of the line in terms of safety, style, and cost. For more on why wrestlers should wear headgear click here.

Other Athletes Who Are Susceptible to Cauliflower Ear

Although wrestlers are the highly likely candidates to suffer from cauliflower ear, so much so that the phenomenon is even sometimes referred to as “wrestler’s ear,” wrestlers are by no means the only ones at risk of developing the deformity.

Any sport which involves grappling puts an athlete at risk of developing a cauliflower ear. This includes Judo, Wrestling, Brazilian Jiu-Jitsu, and any other variant of these disciplines.

Furthermore, Boxers, Kickboxers, and Muay Thai strikers are also common sufferers of cauliflower ear, although typically to a lesser extent than grapplers, both regarding the frequency of occurrence as well as the severity of the condition.

Outside of combat sports, rugby players are also very much exposed to ear injuries and commonly suffer from cauliflower ear.

Cauliflower ear has been shown to cause adverse health effects, the most troubling of which is the increased risk of reduced hearing and deafness.

This demonstrates sufficient empirical evidence to conclude that there is, in fact, a definite correlation between cauliflower ear and hearing loss. Cauliflower ear can also be very painful and uncomfortable and can make it difficult to sleep because of the ear rubbing on your pillow.

Many people will also find the visual appearance of cauliflower ear to be unappealing, which may become socially problematic for some.

Treatment Of Cauliflower Ear For Wrestlers

When it comes to cauliflower ear, the success rate lies in the immediacy of the action taken to prevent its formation. Before permanent deformity occurs, the blood clots or hematomas formed between the skin and cartilage can be drained.

After draining the ear, it is important to allow for a sufficient recovery period, away from training and competition. If you sustain an injury to the ear, you are advised to seek immediate medical attention.

The longer an athlete neglects to seek medical attention, the less likely draining the ear is to have any effect later, and the disfigurement becomes permanent. Once the cauliflower ear is fully developed, it is irreversible, at which time only reconstructive surgery is capable of restoring the natural appearance of the ear.

That said, the best thing you can do is try and avoid cauliflower ear in the first place. Of course, there are no guarantees but wearing headgear is your best defense against developing cauliflower ear.

In writing this article, the purpose was to examine the medical phenomenon known as cauliflower ear in order to better understand why wrestlers are so often affected by it. By understanding the science behind its occurrence, we are better able to prevent its happening.

After taking a deeper look into the cause of cauliflower ear, we can now conclusively assert that wrestlers get cauliflower ear due to the violent impacts repeatedly inflicted on their ears during training and competition.

As the ear is subjected to abuse, hematomas begin to form between the cartilage and the skin encasing it, forming separation and constricted blood flow. Eventually, this leads to the tissues dying, culminating in irreversible damage.

If you take anything away from this article, let it be that prevention through proper wrestling gear, early addressing, and safety equipment are the best ways to preserve your ear health long term.