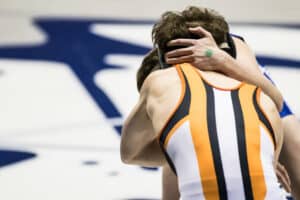 The uniform for wrestlers often generates strong and heated debates. Those who favor this uniform often allude to the long tradition of wearing singlets to wrestling matches and how it helps avoid injuries if they get their fingers caught in the two-piece uniform of their opponent. But there are many other reasons why wrestlers wear singlets.

Wrestlers wear singlets because it allows them to cover up, and the unique shape of the singlet helps keep everything in place. It stays close, almost like a second skin. It helps avoid injury if, by chance, the wrestlers’ fingers get caught up in the opponent’s uniform.

Over the last few years, the ongoing debate about the pros and cons of wrestlers wearing singlets has taken on a life of its own, and many suggest that it is time to ditch the singlet. However, before any such decision is made, it is important to understand why wrestlers wear singlets. Keep on reading to find out more about the history that has influenced this attire, its advantages, disadvantages, and the future of singlets in wrestling.

What Is a Singlet and Why Do Wrestlers Wear Them?

The uniform that wrestlers wear is not commonly known to all. People may often refer to it as the unitard, onesie, or even a stretchy suit because of how the uniform sticks onto the wrestler’s body.

However, the suit has a name, and it is called a singlet. A singlet fits around the wrestler’s thighs and covers the body upwards from there, including the mid-section of the body and the torso.

If you are interested in buying one for yourself, you can look up the Anthem Athletics Helo-X Men’s Wrestling Singlet, which is made of breathable compression fabric and is a combination of style and fit.

The reason wrestlers wear singlets is that they are tight-fitting and will prevent you from getting a finger or toe stuck when wrestling.

A Singlet Has Always Been the Preferred Uniform in Wrestling

When the singlet was chosen as the uniform for wrestling, a lot of things were considered, such as the grabbing techniques employed in wrestling and the chances of incurring injuries. It was found that the singlet is the perfect uniform for a sport that more heavily leans on a hand to hand combat mode, and the uniform has been in use ever since.

In this video, the host walks you through the five key tips you need to keep in mind when you buy wrestling singlets:

How Do Singlets Help in Wrestling Techniques?

In wrestling, there are two main kinds of fighting techniques that are in constant use:

The grabbing and pulling techniques are used by the wrestler when they attempt to grab the opponent to bring the opponent’s face down until it drops to the wrestler’s knee. Singlets matter in wrestling due to the unique nature of these techniques that are employed in this sport. A loosely fitting singlet has a higher probability to work to the opponent’s advantage as well as of causing inadvertent injury.

Since a singlet perfectly fits the body, it becomes especially difficult for the opponent to grab the uniform.

This is true not just for wrestling but for any other physical combat where the techniques of grabbing and pulling are required. Being able to grab or pull the opponent effectively will help in finishing a scoring point, stalling the opponent’s attack, or even slowing down the momentum of the opponent.

Singlets Are Helpful in Preventing Injuries In Wrestling

As the sport itself is about fighting, injuries will inevitably be common. Fingers that feel dislodged, torn ligaments and tendons, and muscle aches are quite common.

The uniform was carefully considered before it was adopted to reduce the chances of an injury. A singlet helps prevent a lot of injuries that loose-fitting clothes may cause. The problem with the latter is that the fingers, arms, and wrists might get caught up in the space between the fabric and the body. It may get further twisted and become more prone to injury.

Why Have Singlets Have Traditionally Been Worn In Wrestling

Initially, the use of singlet was also minimal in wrestling as people contested with no uniform, and the hand to hand combat being the ultimate show of their skill and strength.

However, as society evolved and started to look down upon wrestling without wearing a uniform, a need to come up with a uniform was felt. This is when the singlet was adopted as a uniform for wrestling.

The Downside of Wearing Singlets in Wrestling

While singlets have been worn traditionally, many oppose the idea of wearing singlets and want to do away with it completely. There are many reasons for this view, as well. Chief among them is the fact that singlets are quite revealing. The uniform sits tight on the wrestler because it is made of stretchy material, making it look inappropriate.

Self-conscious athletes who are not comfortable with their body shape or are shy and not comfortable wearing revealing clothes may not take to wearing singlets that easily. If they are forced to wear it, though, it may even impact their performance. This seems to be more common amongst high school wrestlers who are competing in folkstyle wrestling.

While the Mixed Martial Arts (MMA) uniform is a full-body uniform and not made of any stretchy material either, MMA relies heavily on a whole different set of fighting techniques compared to wrestling.

The uniform adopted for wrestling is done, keeping in mind the various body movements and the sudden bursts of explosive movements that may result in untoward injuries. MMA has slightly different techniques than wrestling, and so their uniform has loose-fitting clothes.

Wrestlers have worn the singlet for the longest time.

With the emergence of Mixed Martial Arts (MMA), there are other variants of the uniform that may be seen. It raises the question of why singlets need to be worn in wrestling, as both wrestling and MMA are quite similar kinds of sports, albeit with different uniforms.

The Future of Singlets in Wrestling

With our society constantly evolving and the athletic gear industry improving its designs with the help of new technology, it is likely that these things will play a key role in how the traditional wrestling uniform is perceived and modified in the future.

Likely, alternative solutions such as the two-piece, slightly loose-fitting clothes may cause the singlets to be redundant, but a lot of that depends on what the wrestlers are comfortable with and how they take to these changes.

Many places are now allowing similar clothing to want someone might wear to a no-gi jiu-jitsu competition. Basically replacing the singlet with a pair of grappling shorts and rashguards. For more on what someone would wear to no-gi BJJ check out my article: What To Wear To No-GI BJJ.

Singlets are commonly worn in wrestling, and there is nothing as such wrong with the attire. There have been many wrestlers who have worn the singlet with great pride. Yet others have waxed about the effectiveness of wearing singlets during wrestling matches.

In the end, it all boils down to one’s choices and the rules of the wrestling organization. If a singlet helps a wrestler perform better and at a higher efficiency, they should continue wearing it. So as you can see there are reasons why wrestlers wear singlets. The question is if singlets are the only appropriate attire for wrestling.