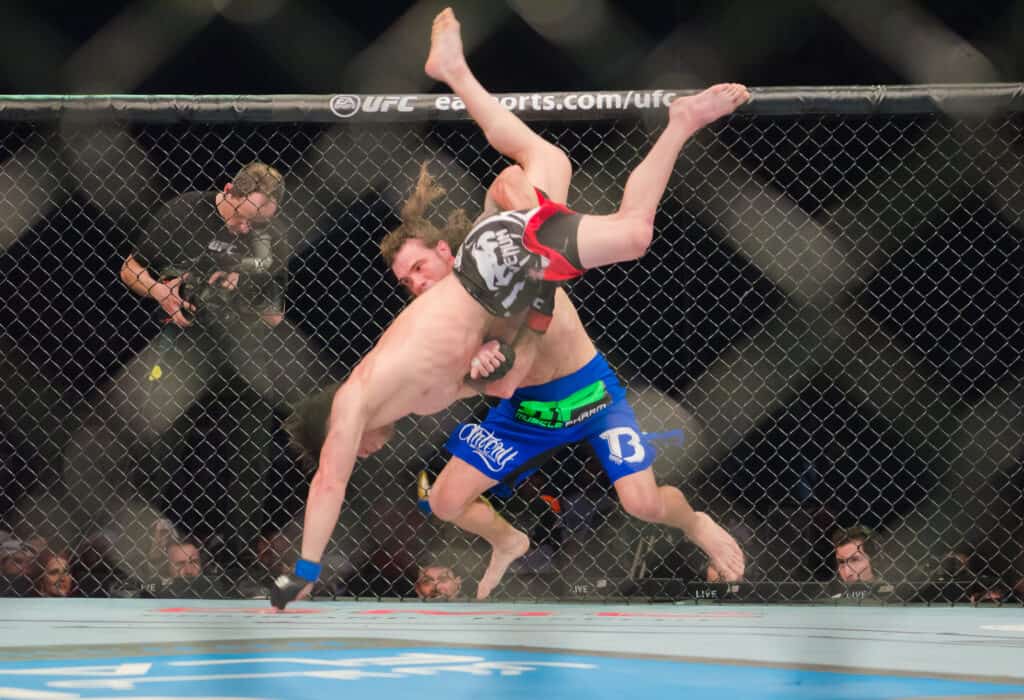 While every aspect of fighting is important in MMA, many experts will often give the edge to grapplers over strikers. Some of this might simply be due to the crazy success grapplers had over strikers in the early days of MMA. However, even today most of the best champions in MMA come from a grappling background like wrestling. But why is grappling so important to the sport of mixed martial arts?

Grappling is important in MMA because a good wrestler can decide where the fight goes. If they want to bring the fight to the ground they likely can and if they want to keep the fight standing they can do that as well. In addition, if you do not have a great understanding of grappling submissions in MMA you are not going to last very long.

Don’t get me wrong you have to be well-rounded to make it in the sport of MMA these days. However, I believe that grappling is and always is the most foundational skill in MMA.

Why Grappling Is Important In MMA

In MMA, grappling skills are for anyone who wants to step foot in the octagon. It allows you to dominate your opponent on the ground and keep control of the fight.  In the early days of the UFC, grapplers had a distinct advantage. In fact, most of the championship fights ended in submission. That said, submissions have decreased as more fighters are branching out to grappling arts.

This is especially true since more and more wrestlers started fighting in MMA. The first Ultimate Fighting Championships however were dominated by Royce Gracie and brought a lot of recognition to Gracie Jiu-Jitsu and BJJ. It seems to be easy for these BJJ fighters to take their opponents to the ground and easily submit them.

Strikers without a background in grappling are vulnerable to takedowns. This allows a grappler to impose their game and tire their opponent more quickly. As a result, it is more effective than striking in MMA if the grappling can dictate where the fight goes. By taking the striker down to the ground the striker loses their power and is unable to implement their skills.

One of the most important aspects of grappling in MMA is the ability to control your opponent. This allows you to get a dominant position and throw down strikes or get them to tap out via submission. Whether you want to focus more on striking or grappling is a personal decision. However, at the end of the day, you need to be proficient in both grappling and striking to compete in MMA these days. But it goes without saying that grappling is very important in MMA.

What Kind Of Grappling Do They Use In MMA

The importance of grappling techniques in MMA is undeniable. Grappling arts have been around for centuries and have been used by ancient Greeks and Romans as well as many other ancient societies. The most common grappling arts used in MMA today would include wrestling, BJJ, and judo.

In the early days of the MMA, Brazilian jiu-jitsu practitioners were very dominant in the sport. However, as more wrestlers got involved in the sport and learned how to avoid the submissions of the BJJ fighters, wrestlers started to dominate the sport. Of course, it would be best to be both great at wrestling and jiu-jitsu. That being said, even today the majority of the UFC champions come from a wrestling background.

Why Is Wrestling Important in MMA?

You may be wondering why is wrestling important in MMA. It has many benefits and translates well into MMA. First and foremost, wrestling helps build endurance and strength. Wrestlers are some of the best-trained athletes in the world. Many wrestlers start wrestling from a very young age and learn to master this aspect of MMA early in their lives. This means they have already built disciple and athleticism before even starting MMA.

Not to mention that they may have also already mastered the art of weight cutting. So naturally, wrestlers who are new to MMA have already mastered a few aspects of the sport.  You can learn more about this in my article: Why are wrestlers so good at MMA.

Wrestling has always been a competitive sport that weeds out the athletes that are not cut out for fighting. That’s why hoards of wrestlers have poured into MMA and have become some of the biggest stars in MMA. They have developed what they have learned from wrestling and adapted it to become successful in MMA.

One major benefit of wrestling in MMA is that it allows you to control your opponent and where the fight goes. If you can get control of your opponent from the top position, you’ll have a leg up over your opponent. This can allow you to hail down strikes or go for a submission from a more dominant position.

Why BJJ Is Important In MMA

Many fighters have come from a wrestling background. While wrestling is a good foundation for MMA and BJJ, most wrestlers find it difficult to fight off their backs and defend themselves. After all, in wrestling, if your shoulders get pinned to the mat then you lose the match. So naturally, wrestlers do not learn how to grapple off of their backs.

Of course, it’s probably best that you avoid being on your back in MMA as well. But more than likely you will find yourself there and you better know what to do when you get there.  On top of this most wrestlers do not learn submissions. That is with the exception of catch wrestling, which has had submissions since its foundation.

Because Brazilian Jiu-Jitsu emphasizes submissions, it is an ideal practice for MMA athletes. Training involves live drills that allow practitioners to use full strength and speed. Other training methods include positional sparring and isolation drills. As with any martial art, physical conditioning is an essential aspect of BJJ training. It is important to make sure you’re conditioned before sparring and preparing for your fight.

If you’re interested in learning how to beat your opponents, jiu-jitsu is the perfect way to get an edge. You’ll learn how to use joint locks and chokes to win via submissions. Moreover, BJJ can help you beat your opponent in a variety of positions, including submissions from the bottom position. Just look at how BJJ black belt beat wrestler Chael Sonnen via triangle choke from the bottom position. This was after pretty much losing the rest of the fight.

Grappling is a crucial skill if you want to learn how to fight in MMA. This would include all aspects of grappling. Though many would consider wrestling the most important aspect of MMA, you need to learn submission and how to fight off your back as well.

Arguably, getting started can be the most challenging part of getting into a competitive sport. Judo is no exception — this ancient martial art requires plenty of strength, speed, and agility....