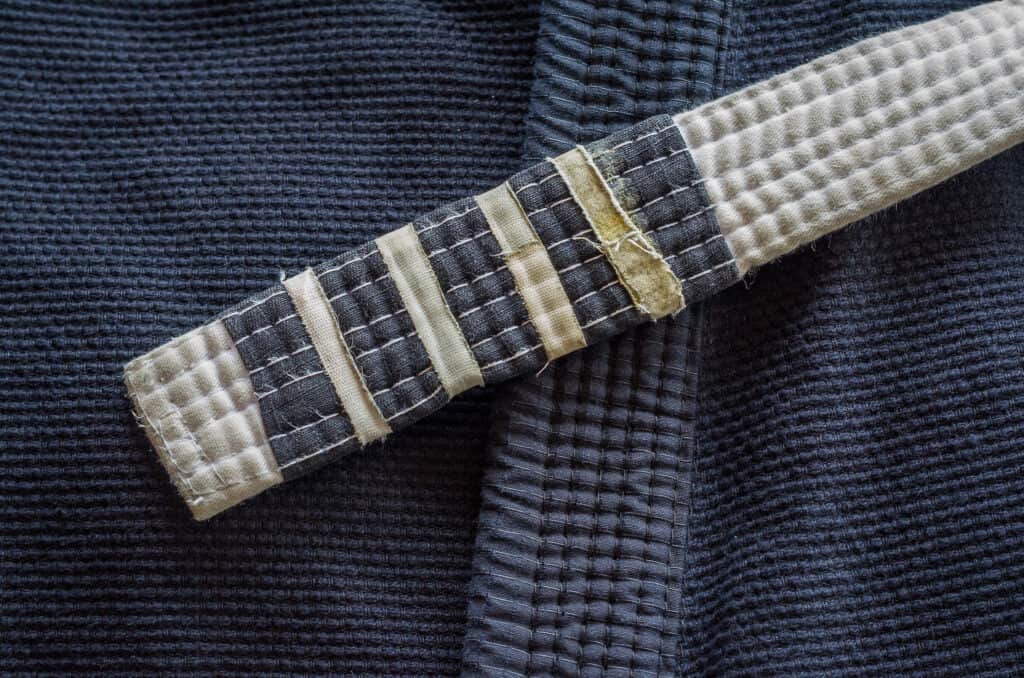 If you are new to BJJ you might have noticed that most people have stripes on their belts. You probably already understand the meaning of the color of a belt but what do the stripes on the BJJ belt mean?

BJJ stripes represent a student’s skill, knowledge level, and progress at each belt rank. The more stripes the practitioner has, the closer they are to the next belt. For example, you can move up to a blue belt after four stripes on a white belt, with each stripe taking about six months.

Simply put the stripes on a BJJ belt represent how advanced you are in your current belt. A BJJ professor has many students to keep up with and the stripes on the student’s belts can help them keep track of progress.

So having stripes on your BJJ belt can help you and your teacher gauge roughly where you are in your belt progression. That said, not all jiu-jitsu schools focus on belt stripes but most do.

Want to know more about the stripes on the BJJ belt? The rest of the article will discuss the meanings of the stripes on different BJJ belts for youth and adult practitioners.

What Are BJJ Stripes and What Do They Signify?

The stripes on a BJJ belt are usually just pieces of athletic tape that instructors wrap around their students’ BJJ belts. The stripes themselves represent the BJJ practitioner’s knowledge, skill, and experience within a belt.

Different schools have different criteria for the stripes they give to their students, and not all schools give out stripes.

For white belt practitioners, stripes are helpful because they help them track their progress. When students see others earn their stripes, they want to know why and how the other students reached that level.

Getting the first stripes means a lot if you’re only starting in BJJ. Though you are not getting a new belt the first stripe on your BJJ belt represents your first promotion in your jiu-jitsu journey.

Stripes also help a BJJ instructor to know each student’s level. So all in all, BJJ stripes are important for keeping track of your progress.

How Many Stripes Do You Get On Each Belt

Students can obtain up to four stripes on their white, blue, purple, and brown belts. In other words, the more stripes a student has, the closer they get to the BJJ ranking system’s next belt.

BJJ practitioners, however, shouldn’t focus too much on stripes. Sure, stripes are excellent as they act as a good reminder of the student’s BJJ progress — and can be uplifting when students obtain them — but stripes can also be demotivating because when a student hasn’t received their stripes while others already have.

Some BJJ schools don’t give out stripes at all, but if they do, they can decide when to give a student a stripe — if the instructor thinks the student deserves a stripe, they will reward the student with a stripe.

Generally, a white belt student can get a stripe every six months, but this heavily depends on the instructor (and they think the student deserves it). After obtaining all four stripes, the student can move on to the next belt, the blue belt.

It typically takes about 1-3 years to get to blue belt in BJJ. But that is only the average.

How To Earn Your Stripes

Earning the first stripe is a rewarding experience, and a student can only achieve their first stripe by working hard and training all of the skills and techniques that their instructors have taught them.

If you’re working on getting your first stripe, you want to note everything you’ve learned, remember them, and implement them in your training. Your instructor will assess your knowledge of BJJ fundamentals.

You want to know the requirements for getting the stripe. Usually, instructors assess the student’s mat time, class attendance, skill level, and knowledge. In some cases, the instructor will test the student before rewarding them.

If you’re not sure what requirements are necessary for you to level up, talk to your instructor about it, and they will let you know what positions they want you to practice, which can take several months.

If you’ve waited long and have yet to receive your stripe, you may want to ask your instructor about it because sometimes instructors forget to reward their students — it happens.

What Are The Stripes On A BJJ Black Belt?

The red/black belt is what a practitioner receives upon reaching the 7th degree. At this level, they earn the ‘master’ title. Practitioners at this level must train and teach the black and red level for at least seven years before moving on to the next level.

The Brazilian Jiu-Jitsu (BJJ) uses a ranking system representing a practitioner’s skill and knowledge levels. There are two groups for BJJ: youth and adults. Both groups use different belt colors and stripes to indicate the various martial arts ranking system levels.

BJJ stripes represent a BJJ practitioner’s skill and knowledge level and their progress on the belt rank. When a practitioner has more stripes, that means they’re closer to the next belt. Not all BJJ schools give out stripes, and essentially, students don’t need to focus too much on obtaining stripes.

link to Does Lifting Weights Improve BJJ? Why Grapplers Must Lift Weights

Luta Livre and BJJ have a rivalry that goes way back. After all, these two Brazilian grappling arts started to develop around the same time. So obviously one of them had to arise as the superior...