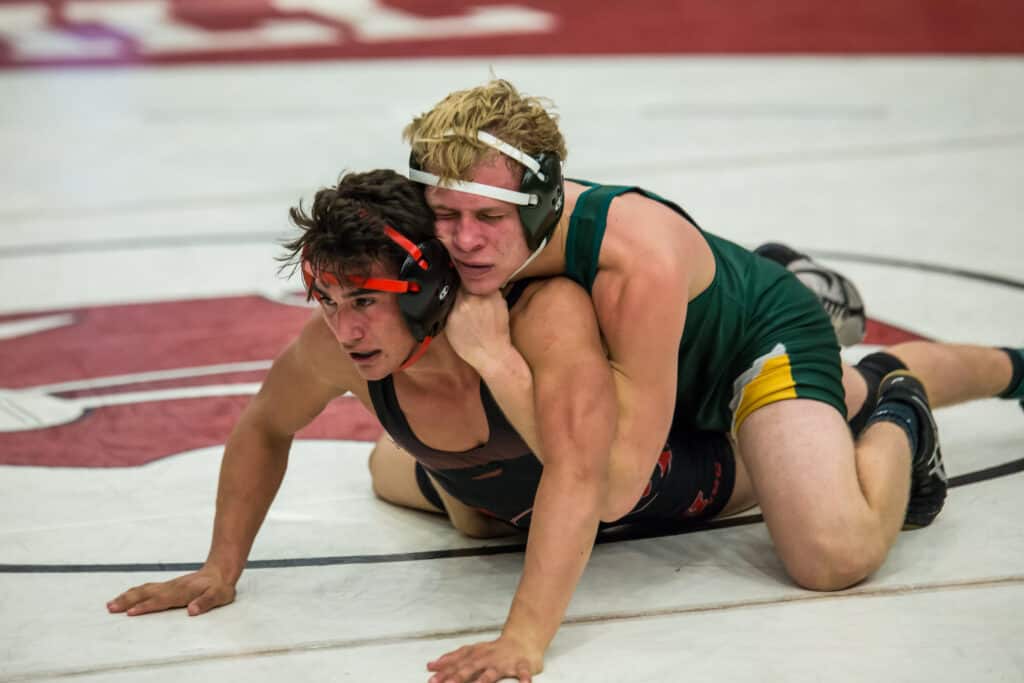 This is because, unlike folkstyle and freestyle wrestling, it has fewer rules and allows matches to be won via submission. In fact, many of the popular submissions found in no-gi grappling today have been part of catch wrestling for a long time. A few good examples would include heel hooks and neck cranks.

Unfortannly however, catch as catch can wrestling is not as popular as it once was. But thankfully with the growing popularity of MMA and no-gi submission grappling it is starting to pick up steam again.

History Of Catch As Catch Can Wrestling

Most people would attribute John Graham Chambers as the man who popularized catch as catch can wrestling in 1871. However, Chambers more or so was a great promoter for the sport rather than an inventor. It was mostly influenced by other English wrestling styles at the time as well as Irish and even Indian wrestling.

For the most part, it is practiced by blue-collar workers in England. It began to become popular amounts coal miners, loggers, and the English Navy. It was a form of entertainment during a time when you couldn’t simply go to the movies or watch Netflix. Workers would wrestle and place bets on who would be the winner.

Much of the style was developed from already popular wrestling styles such as Lancashire wrestling. However, since many of the wrestlers from the navy would travel to India and other parts of the world they would bring back wrestling techniques to teach other catch as catch can wrestlers.

The goal of catch as catch can wrestling is to either pin an opponent or cause them to tap out via submission. It truly was a hybrid grappling style that consisted of techniques from many other styles.

Why Is It Called Catch As Catch Can

The reason it is called catch as catch can is pretty simple, a wrestler would try and catch what they can ( aka an arm, or heel, wrist ) and try and submit their opponent.

Today it is more commonly known as catch wrestling. Though it is not as popular as it once was it is starting to pick up steam again. Catch as catch can wrestling has proven its effectiveness in the world of grappling and even in MMA. In fact, some of the top grapplers and even UFC champions come from a catch wrestling background.

Catch As Catch Can Wrestling Rules

The rules are pretty simple. You either need to win via submission or pin in catch wrestling. There are no points in catch as catch can unlike many of the more popular styles today.

Of course, it is a grappling-based sport so there is no striking, eye-gouging, or pulling hair. Matches are the best of three falls and each fall has a 12-minute time limit. Check out this example of Chris Lomas Vs. Josh Barnett. Josh Barnett is a great example of someone who has excelled in catch wrestling, submission grappling and he even became a UFC champion.

Can You Still Learn Catch As Catch Can Wrestling Today?

You can still learn catch as catch can today but finding a place to learn can be difficult. Unlike other grappling arts such as BJJ, you are not going to find a catch wrestling school in every large town or city. That said, it is still worth researching your area to see if there is a qualified instructor in your area. You never know you might be in luck.

That said, I would say that most people in the USA and most other countries are probably not going to find a place to learn catch as catch can wrestling. Luckily however there are some good places to learn online. One good resource to check out is BJJfantics.com.

If you are already familiar with BJJ fanatics then you can also find some great instructionals there as well. A good example would be the Catch Wrestling Formula by Neil Melanson as well as Champion Ship Level Catch Wrestling by Josh Barnett.

Of course, learning online might not be as good as learning in person. That said, if it is your only option then it is your only option. I would suggest that if you do want to learn online then it would probably be beneficial to also cross-train in person with another grappling art such as BJJ. This way you have a good grappling base and some of the concepts that you learn online will come easier.

Influence On Other Grappling Styles

Many of the most popular grappling styles today were heavily influenced by catch as catch can wrestling. A few examples would include folkstyle wrestling, freestyle wrestling, Russian Sambo, Luta Livre, and No-Gi BJJ. In fact, even some techniques from judo and BJJ were originally taught to judokas from catch wrestlers.

If it was not for catch wrestling then many grappling styles today would either not exist or would look completely different. This sport truly is a grandfather sport to many of today’s combat sports. Grappling and MMA would not be the same if not for the influence of catch as catch can wrestling.

Unfortunately, there is a shortage of qualified instructors to learn from in person. Hopefully, since it is starting to pick up in popularity we will see more and more grappling schools incorporate catch as catch can wrestling. But for now, the best way to learn might have to be through online resources.