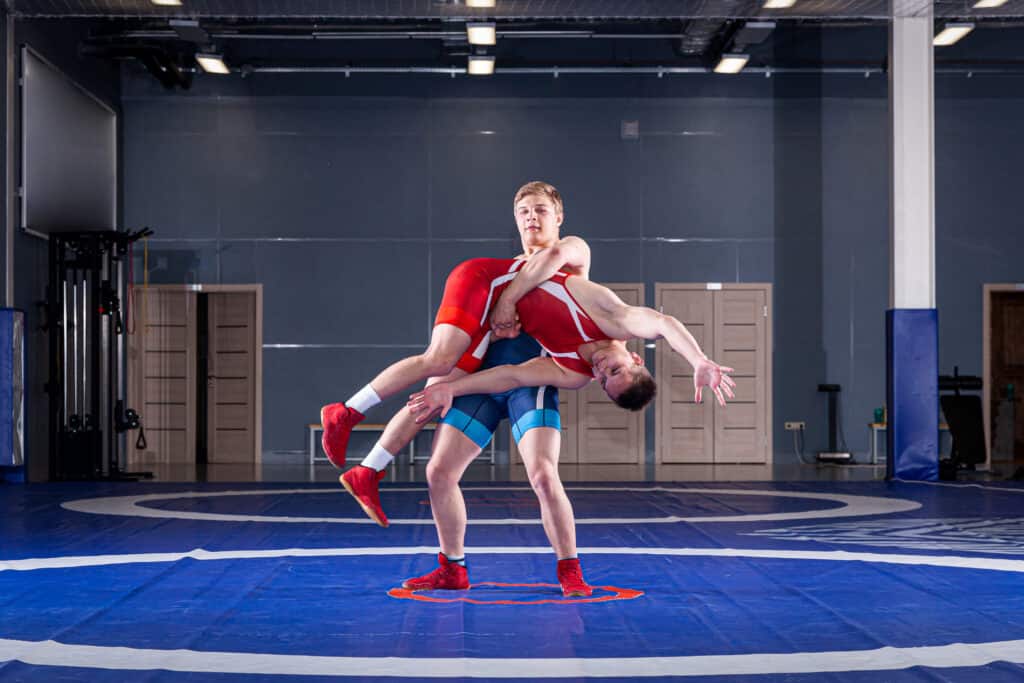 Greco Roman Wrestling was invented in the 19th century, approximately between 1815-1870, and is believed to have borrowed heavily from Roman and classical Greek styles. Jean Exbrayat, a Napoleonic soldier, is credited for the formation of the sport’s basic rules and evolution from other styles.

Curious to learn more about Greco Roman Wrestling? If so, then you couldn’t be in a better place. Read on for an in-depth discussion of the history, rules, and features of this popular wrestling style.

What Is Greco Roman Wrestling?

Greco Roman Wrestling is an Olympic Games-recognized form of combat sport that has been practiced for several centuries. The sport differs from other styles of wrestling ( especially freestyle wrestling ) due to its rules, which forbid below-the-waist holds and takedowns.

Therefore, in Greco Roman Wrestling, participants can only utilize their upper bodies to execute different moves and pin opponents or score points to win the game. The main objective of the sport is to defeat opponents over three, two-minute rounds using a host of upper-body combat techniques.

History of Greco Roman Wrestling: When Was It Invented?

Greco Roman Wrestling is recognized by Olympics.com as one of the oldest sports to feature as part of the Olympics program. And although the combat sport’s current format was developed in the 19th century, it has a rich history that echoes back to the days of ancient Greece.

Though the modern Olympic style of Greco Roman Wrestling was formed in a more modern time in Europe it was influenced by the ancient Greeks, as can be evidenced by a wide array of Greek art and literature. Ancient greek wrestling became hugely popular in Greece, especially since it integrated combat fistfights.

The sport remained popular after Rome conquered Greece and mastered its culture. However, the dawn of Christianity in Rome oversaw a steep decline in the sport’s popularity, as gladiator schools and Olympic Games came to a gradual halt.

Greco Roman Wrestling would remain popular but unrecognized as an official sport until the start of the 19th century, where its renaissance started in France. As mentioned earlier, the primary rules of the sport were developed in France under the stewardship of Jean Exbrayat.

The United World Wrestling credits Exbrayat as the founding father of modern Greco Roman Wrestling. While laying out rules, Exbrayat deemed it illegal to hold opponents below the waist or attack opponents through fists.

Greco Roman Wrestling experienced an exponential increase in popularity throughout the 19th century and was officially registered as a discipline in the Olympic Games in 1896. The combat sport’s popularity in France made it a household name in Europe, with most opponents and fans alike traveling across countries to experience the sport.

To win a Greco Roman wrestling match, you’ll need to either accumulate more points than an opponent or pin both his shoulders to a mat. Wrestlers can accumulate points by executing throws, locks, holds, and other takedowns (provided they’re legal).

Points for holds and moves are usually awarded on the difficulty of execution. Players can also earn points through reversals, more specifically when they regain control after being in defensive positions.

Besides cumulative points, victory in Greco Roman wrestling can also be achieved by pinning an opponent down with both his shoulders firmly on the mat (for a sufficient period). Pinning your opponent results in instant victory.

A wrestler can also win a Greco Roman wrestling match instantly if an opponent gets injured, hands him a walkover, or gets disqualified.

In the event of a tie during the Olympic Games, winners are usually determined based on the criteria listed below (in decreasing order of priority).

Greco Roman wrestling bears tons of similarities to freestyle wrestling. However, it does come with its unique rules that make it different from other types of wrestling.

Below are some of the rules wrestlers need to observe when participating in the sport:

Modern Greco Roman wrestling was officially formed in the 19th century, Greco Roman Wrestling has morphed into a global, male-only sport with millions of fans worldwide.

Winning a Greco Roman Wrestling match requires both skills and attention to detail due to the sport’s abundance of rules. Opponents must strive to strike a balance between attack and defense without using their lower body.

Under the regulation of UWW, Greco Roman Wrestling has continued to increase in popularity, establishing itself as a mainstay in both continental and global tournaments.

link to Is BJJ Fanatics Legit? Here's what you can expect from their programs

Whether you are new to BJJ or just getting started you have probably heard of BJJfanatics.com. BJJ fanatics is the most popular source of BJJ instructionals and DVDs on the planet. However, you might...

This Post Contains Affiliate Links. Many people are seeking extra ways to improve their jiu-jitsu game. Whether a serious competitor or a hobbyist who has a limited schedule, many people are...