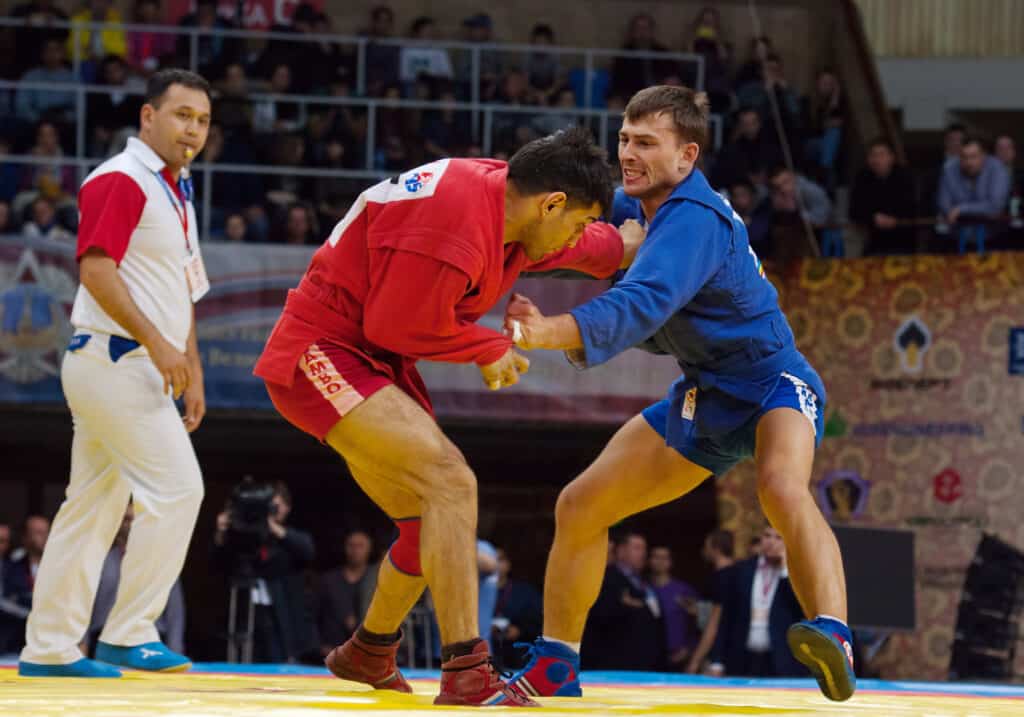 Sambo and wrestling are both competitive grappling sports. There is a lot of overlap between the two because sambo was heavily influenced by catch wrestling and judo. To the naked eye, someone might look at sambo and think it is simply wrestling but with different clothing attire. But there are certainly other differences between sambo and wrestling.

The biggest difference between sambo and wrestling is that sambo has submissions and a different rule set than wrestling. In addition, sambo athletes and wrestlers wear different uniforms which causes some major differences as well.

In wrestling, you are not allowed to grab onto any part of your opponent’s uniform. In fact, one of the reasons wrestling singlets are so tight is to prevent you from grabbing them. So as you can see something as simple as a uniform can cause big differences between wrestling and sambo.

Differences In Rules Between Sambo and Wrestling

There are some big differences between sambo and wrestling when it comes to rules. That said, there are also many similarities as well, which is why many people confuse the two. A few things that are similar are that they are both performed on similar mats and they both have a points system that rewards takedowns.

That said, takedowns are rewarded a bit differently in wrestling than in sambo. In sambo, you can end the match with a single throw like in judo. After all, sambo has also been influenced by judo as well so there are also similarities and differences between judo and sambo as well.

In sambo, if you throw your opponent onto their backs and you remain standing then you win the match. In freestyle wrestling, you can be awarded more points for certain takedowns but you will not automatically win the match by scoring a high point takedown.

Another big difference between sambo and wrestling is that you can win via submission in sambo. There are no submissions in freestyle, Greco-Roman, or folkstyle wrestling. The only exception is in catch wrestling. Catch wrestling does have submissions but it is not as well known as the other styles of wrestling.

A sambo uniform is much different than a wrestling uniform. In sambo, you wear shorts and a jacket that is very similar to the top of a judogi. You are basically wearing the same thing above the waist that you would see in judo but unlike judo, you are wearing shorts on the bottom half.

Wrestlers on the other hand typically wear a very tight-fitting wrestling singlet. Something as small as a uniform can make some major changes to the ruleset and techniques. Many of the throws in sambo rely on the use of the jacket to execute the throw. So you will see many of the same throws in sambo that you would in judo.

On the other hand, you are not allowed to grip the clothing of your opponent in wrestling. So all takedowns must be done without relying on using your opponent’s clothing.

One of the more recognizable things you can find from catch wrestling is armlocks and leglocks. But the rules between the two sports or styles have their differences. Like the other wrestling styles mentioned, catch wrestlers do not wear a heavy jack like in sambo and judo.

The rules between the two are very different as well. Catch wrestling rules are pretty simple to follow. You win by either submitting your opponent or by pinning your opponent’s shoulders to the mat. So one of the similarities in the rules is the ability to submit your opponent through submission.

However, the other rules are different. You do not win in catch wrestling through points or by throwing your opponent to their back. You actually have to submit or pin them. Putting your opponent’s shoulders to the mat can earn you points but will not win the match alone.

There are takedowns in catch wrestling but the goal is to take them down to submit or pin them.

Sambo Vs Wrestling In MMA

One area that people often debate is which style between wrestling and sambo is better for MMA. After all, many of the top fighters of all time come from sambo or wrestling backgrounds. There is no clear-cut answer but what I can say is that they can both be a great base for MMA.

One thing that must be stated is that there is a style of sambo called combat sambo. Like MMA it contains both grappling and striking techniques and is already pretty similar to MMA. In addition, sambo contains submissions and wrestling does not. So if someone who only did sambo fought someone who only did wrestling in MMA, then I would have to give the advantage to the sambo fighter.

That said, if a wrestler simply had a base in wrestling and then went and learned submissions and striking from other styles then it might be a whole other story. We certainly know from experience that people with wrestling backgrounds have dominated MMA in recent years.

That said, there are probably more wrestlers going into MMA than sambo athletes. On top of that, these wrestlers are not just jumping into MMA. They are also learning submissions and striking from other martial art styles before jumping into the octagon. That said, we do that wrestling is very effective in MMA.

At the same time, this is not to say that sambo has not shown its effectiveness in MMA either. Two of the greatest fighters of all time come from a sambo background. That would include both Khabib Nurmagomedov and Fedor Emelianenko. There are other examples as well, but these two are enough to prove the point that sambo is effective in MMA.

So realistically both sambo and wrestling are great for MMA. Whatever style you choose you will need to learn how to be well-rounded in all aspects of MMA. Long gone are the days that someone who only know one martial art style could dominate in the octagon.