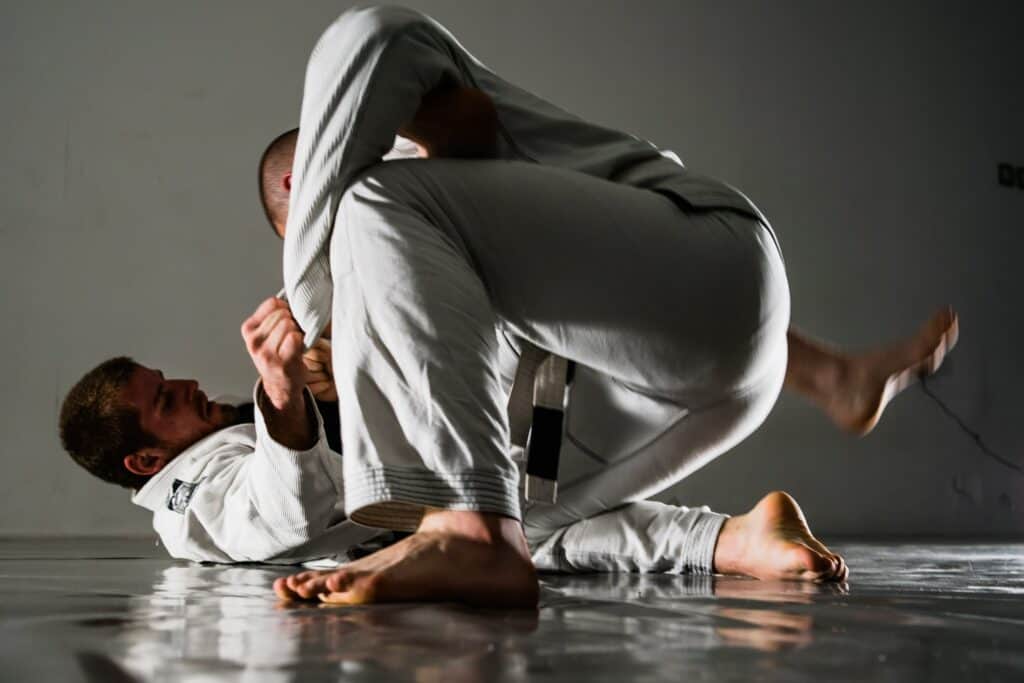 That said when a smaller person is grappling with a bigger person who also knows BJJ, the bigger grappler is going to have a big advantage.

Thankfully, this does not mean that you cannot still be a giant slayer as a smaller BJJ practitioner. You will, however, need to find a game that works on larger grapplers and get really good at it.

This is not to say that size does not matter in BJJ. Simply that it is only one factor of the game. With the strategy you can still beat grapplers much larger than yourself.

So with that said, if you are on the smaller side and want to hold your own with the bigger grapplers in your gym, you need to find the right game plan. One way to do that is to learn from someone who has done it at the highest level.

If you are lucky you might know someone who can teach you one-on-one. But most likely you are going to have to find this information online. The easiest way to do this is to find a great BJJ instructional designed for smaller practitioners.

One thing that truly drives me crazy about many of the popular fitness gurus out there is that many of them think that if everyone just trained as hard as they did then everyone would get huge and jacked as well.

Despite the fact that many of those people are on some form of performance-enhancing drugs, not everyone has the genetics to be a big strong person.

Take it from me as someone who has trained 100s of people, not everyone who trains hard and eats right is going to get huge and jacked.

Your genetics play a huge role in just how much muscle mass you can naturally put on your body. That said, everyone does have the ability to get stronger than they are today.

So one thing I would say is that even if you are naturally a smaller-sized person, do what you can to get as strong as possible within your genetic limit. But as a smaller grappler, you are also going to need to alter your game when rolling with larger opponents.

With that in mind lets take a look at some of the best BJJ instructionals that can help smaller grapplers beat larger and stronger opponents.

This instructional covers a whole list of things including wrist locks, guard attacks, sweeps, and leg locks. All of which are very effective when grappling against an opponent much larger than yourself.

In addition, giant killing will help improve your game at all belt levels. Even smaller advanced belts will likely look at grappling larger opponents differently after learning from Claudio Calasans.

So stopped getting smashed and learn to attack and sweep larger opponents from the open guard. These attacks work on bigger opponents and don’t rely on strength, speed, or even flexibility. So you do not need to be a super athlete to make these submissions work.

LEARN HOW TO DESTROY LARGER OPPONENTS FROM OPEN GUARD NOW!

How To Beat Bigger Guys: Guard By Bruno Malfacine

If you wanna learn how to beat bigger guys in BJJ then there is no one better to learn from than the only 10x weight class black belt world champion in history. Bruno Malfacine has learned how to handle 200 plus pound opponents at only 127 pounds!

Playing guard is a crucial skill to master for everyone but especially smaller grapplers. After all, you are probably looking for an instructional that is going to help you avoid getting constantly smashed by bigger guys.

This BJJ instructional will provide you with the perfect game plan to face off with bigger opponents from the guard.  Just look at what Bruno Malfacine’s has done in his career to know that he has a killer game plan in dealing with bigger grapplers.

CHECK OUT HOW TO BEAT BIGGER GUYS PLAYING GUARD NOW!

The next instructional in the Bruno Malfacine series worth mentioning is How To Beat Bigger Guys: Open Guard Passing. Really I think any content from Bruno is gold for smaller grapplers. After all, you will need a guard passing system that does not rely on size and strength.

Learn how to pass open guard, De La Riva, X Guard, and more without relying on body weight or strength. You will get the blue print for his toreando system and learn how to use movement to get past bigger grapplers powerful hips.

How To Beat Bigger Guys: Half Guard Passing By Bruno Malfacine

Last but not least in Bruno Malfacine’s How To Beat Bigger Guys series is his half guard passing instructional. So if you are having issues with passing the half guard on bigger guys then your going to want to check this one out.

He will show you how to pass a larger guys half guard without relying on size or strength. He also utilizes chokes and other submissions from the half guard which I am a huge fan of. In fact, he covers the D’arce choke from half guard which probably the submission I hit more than any other.

LEARN HOW TO PASS A BIGGER GUYS HALF GUARD NOW!

Alright now it time to talk about what might be the biggest hurdle for smaller grapplers. Which is of course, taking larger opponents down. Seeing as how his brother is Nick Rodriquez is one of the top heavy weights in the world, he probably had to learn this the hard way.

His system for taking down larger opponents includes the using the right set ups and learning how to off balance and exhaust the big guys.  Learn how to get behind bigger opponents with a variety of arm drags, duck unders, an more.

LEARN HOW TO TAKE BIGGER OPPONENTS DOWN NOW!