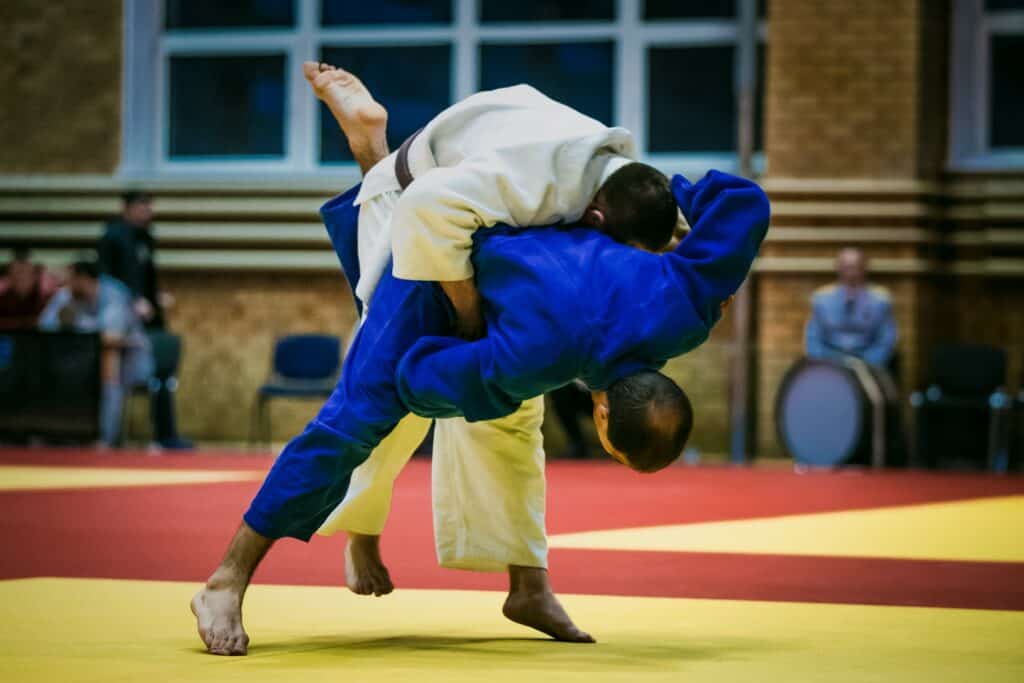 BJJ is an excellent martial art and sport. It can be very effective in both MMA and self-defense. That said, BJJ is typically thought of as a grappling style that focuses on grappling on the ground. So if a BJJ practitioner cannot take their opponent to the ground it will be hard for them to utilize their skills.

This is because you might fall in a vulnerable position or give your opponent your back. So when looking at takedown instructional we are focusing on the ones that are specifically geared toward BJJ. But first, let’s talk about why takedowns are so important to learn in the first place.

A BJJ practitioner does not need to know every takedown or throw in the book. It would be better to really focus on mastering a few easy and effective takedowns. After mastering a few great takedowns you can later add more to your game. But at first, just focus on learning a few takedowns and a few throws that are white belt friendly.

Since takedowns are not rewarded in BJJ as much as judo or wrestling, they are often not as big of a focus. Takedowns take up a lot of energy and are only awarded 2 points in a BJJ competition. For many BJJ players, they would rather simply pull guard and try and get a sweep.

This is easy to understand as it would reward them with more points. Of course, if I made the rules takedowns would be worth more points than they are in BJJ, but I don’t think that is going to happen anytime soon.

Even though takedowns are not awarded as many points as I think they should, they are still a part of the game. So you should at least learn the basics of a good takedown game even if your game plan is to pull guard.

You Need Takedowns For Self Defense

The main reason I believe you need to learn takedowns and throws is for self-defense. Before sport BJJ, the main focus of jiu-jitsu was self-defense. Though the sport of BJJ does not award takedowns heavily, you probably would not want to pull guard in a self-defense situation.

Being on your back is much more dangerous when strikes are allowed and you might be facing multiple attackers. On top of that, you might not even get to use your BJJ if you can’t take your attacker to the ground.

In addition, if you know some good throws you might be able to throw your attacker to the ground and run away. After all, avoiding a confrontation is always the best choice for self-defense

Knowing how to take someone down s is an essential skill every BJJ player needs to master. Even if you are only interested in sport jiu-jitsu. Just remember that even in competition every match starts standing up.

Unfortannaly some BJJ schools put very little focus on takedowns. As we already covered, it’s hard to use your BJJ on an opponent if you can’t take them down to the ground in the first place.

No one is saying that you need to know every takedown in the book. Instead, let’s focus on learning some takedowns that are effective and work well for BJJ players. With that said, let’s look at some BJJ instructionals that are focused on takedowns.

The Buchecha Takedown System In The Gi by Marcus “Buchecha” Almeida:

If you are looking for a BJJ instructional on takedowns in the gi then you might wanna check this one out. The Buchecha Takedown System is taught by Marcus Almeida who is the only ever 13-time world champion.

So if you wanna build some confidence in your gi takedown game this might be the right choice for you. Learn how to set the pace and take down your opponent and control the match with this jiu-jitsu instructional!

Check out this example of a double-leg takedown in the Gi by Marcus Buchecha!

Find Out More About This BJJ Take Down Instructional Here!

In the USA it is probably more likely that you come from a wrestling background than a judo background. That said, judo has some very effective takedowns and throws for BJJ. This should come as no surprise seeing as how BJJ originally evolved from judo.

That said since judo has become an Olympic sport that is quite a bit different from BJJ. So not all judo throws are going to be as effective for BJJ as they are in judo. In this instructional 4th Degree Judo black belt and Olympian Matt D’ Aquino shows you some simple judo takedowns that work great in BJJ!

Find Out More About This Takedown Instructional Here!

Andre Galvao is considered by many to be the greatest competitive grappler of all time. Not only is he a 6-time black belt world champion, but he is also a 6-time ADCC world champion. So no matter what rule set you to prefer, he is one of the best to learn from.

I would especially suggest this one over the first two if you are more focused on your no-gi game. Of course, these takedowns still work in the Gi but they do not require the gi to work properly.

Andre Galvao has shown that he is one of the best takedown artists in the world of jiu-jitsu. What I love is that he focuses on the highly effective takedowns that actually work in competition. Sometimes it’s good to stick to the basics of the good old double-leg and single-leg takedowns.

Check Out The Takedown Dominance Instructional By Andre Galvao!