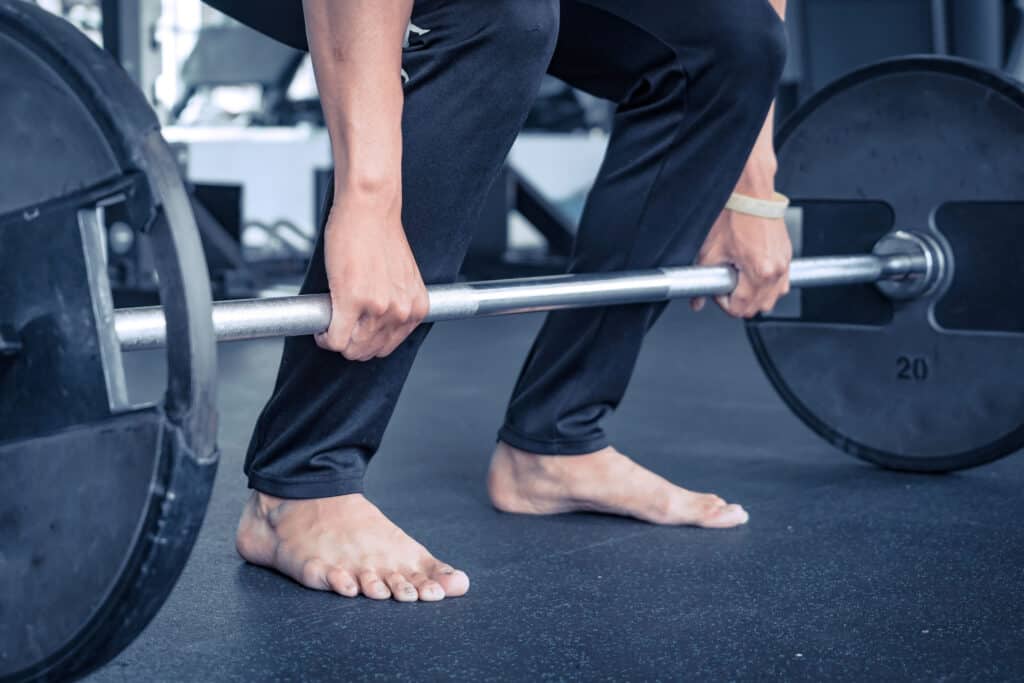 One thing wrestlers are well known for is being powerful and athletic. This is mostly due to the nature of the sport and wrestling’s well thought out strength and conditioning programs. An area that is up for some debate in the world of wrestling is whether wrestlers should do deadlifts. Though most agree that deadlifts are great for building strength, some believe that there is too much risk of injury with deadlifts in a wrestling program.

In my opinion, if a wrestler is well built for doing deadlifts and properly trained then they probably should incorporate deadlifts into their strength and conditioning program. If a wrestler has a hard time doing traditional deadlifts then they might opt for the hex bar deadlift instead. That said, wrestlers are not powerlifters so there is no need for a wrestler to test their one-rep max on a deadlift.

So even though I do believe wrestlers should do deadlifts they do not need to be able to go toe to toe with a powerlifter. Instead, focus on build up your deadlift in the 6-12 repetition range instead.

Of course, if you are unable to perform the deadlift for whatever reason there are some other options. A wrestler does not have to do deadlifts to build the necessary strength. That said, I do believe that the deadlift is one of the best exercises you can do to build real-world strength.

Why Wrestlers Should Do Deadlifts

Deadlifts are a great full-body exercise for just about anybody. However, I do believe that they can be especially good for wrestlers. They are great for building strength in the hips and core. These are very important areas to strengthen if you are a wrestler.

Think about how much hip and core strength a wrestler needs to generate to effectively take down their opponent. Most of the muscles you need to develop for wrestling takedowns are worked when doing a deadlift.

Of course, there might be a point of diminishing returns. A wrestler does not need to be able to deadlift 600lbs to build the necessary strength for wrestling. At the same time being able to deadlift that much would not hurt your wrestling either. It is simply that you can probably find a better use of your time than trying to become a world-class deadlifter.

So even though deadlifts are great for wrestlers you still need to make sure you are spending enough time working on your technique and other aspects of physical conditioning. It should also be said that deadlifts can be very taxing to your body.

Because of this, I would recommend that wrestlers only do deadlifts once per week or twice per week at the maximum. That is at least if you are deadlifting with decent intensity. If you overdo it then you will have difficulty recovering which might interfere with your training.

On top of that, many strength and conditioning coaches today claim that the hex bar deadlift is better than traditional deadlifts for athletes. Now I am not sure that I think that it is a way better movement but it might be.

But even if it is just as good and it is safer or easier to perform then I would still say it is superior. I simply like traditional deadlifts because I like to deadlift. But if you do not care how you deadlift then the hex bar might be the better option.

Consequently, the traditional deadlift might be better for strengthening the hips. At the same time, your quads are less activated and it can put more strain on your lower back. So if you have back problems you might find that the hex bar deadlift is more forgiving.

If you are perfectly healthy and can perform both then I would suggest working them both into your strength training program.

What Muscles Does The Deadlift Work?

One of the reasons the deadlift is such a great exercise for wrestlers is that it is a compound movement that incorporates multiple muscle groups. The main muscles worked in a deadlift would include the glutes, quadriceps, hamstrings, low back muscles, lats, traps, core muscles, and much more.

Really the only muscles not worked very much are your upper body pushing muscles. That said, deadlifts are one of the best ways to build up your back and your lower body. Because of this many people who do split routines get confused on whether or not deadlifts should go on your back/pulling day or on leg day.

My two favorite routines are a push/pull/ leg routine or a simple full-body routine. Though it is called a push/pull/leg split routine I actually do it in a different order. I do legs/push/pull instead and workout Monday/Wednesday/Friday. The reason for this is that I do deadlifts on my pull day ( Friday ) and have two full days of recovery over the weekend before I have to do legs.

If I did the typical push/pull/leg then I would only have one day to recover after doing deadlifts before hitting legs. The other choice I like is a typical full-body workout routine. I would especially recommend full body if you are new to lifting or can only lift weights a few days per week.

Either way, I would typically only recommend doing deadlifts once per week unless you are brand new to lifting. The reason for this is that if you are new to lifting you are not going to be strong enough to do enough damage to your body that you would need multiple days to recover from.

That said, once you get stronger and can deadlift a lot of weight then you are going to need more time to recover before deadlifting again. This is especially true if you are training hard in wrestling practice as well. Deadlifts are great for wrestlers but they are taxing on the body. So make sure you get enough recovery time in as well.

You can work the same leg muscles by doing squats and leg presses. Squats and leg presses work your glutes as well but you might want to add in some hip thrusts, back hyperextensions, or a lumbar extension machine for your lower back and hip muscles. Squats do work these muscles as well but you still want to make sure to get some extra work in on your lumbar spine muscles.

Many of the other muscles are easily worked out by doing other pulling exercises such as pull-ups, rows, shrugs, face pulls, and other movements. So don’t worry if you can’t deadlift, just make sure you are working all of the muscles in your body. Especially those that are so important for wrestling.

All in all, wrestlers should deadlift if they are able to safely. That said, there are plenty of ways to work around this if you are not able to. This might mean switching to a hex bar deadlift or dropping deadlifts altogether. If you drop deadlifts all together just make sure you are still getting a good balanced full-body workout.