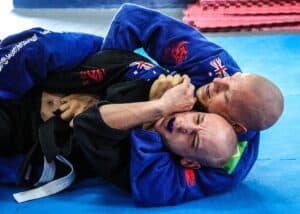 One of the very first things you should learn in BJJ is some basic white belt escapes. As a BJJ white belt, you are going to have to learn that it is going to take some time before you are submitting people more often than you are getting submitted yourself. Of course, you might get a few in here and there on some other white belts and perhaps even blue belts.

That said, you will likely spend the majority of your time getting smashed and submitted. This is why you need to focus on learning escapes. But what are the best escapes to learn as a BJJ white belt?

As a BJJ white belt, you are going to want to learn a handful of escapes for different positions. You need to learn a few side control escapes, knee on belly escapes back escapes, and mount escapes.

Though there are plenty of escapes that you could learn from these positions, you will only want to focus on a few at first. The escapes that you choose to learn should be simple enough for a white belt to understand while still being effective at all levels.

Why Escapes Are So Important For BJJ White Belts

When you are just getting started in jiu-jitsu you are going to find yourself in undesirable situations more often than not. One of the first concepts that you will need to learn about is the BJJ positional hierarchy. Which is basically an overview of the best to worst positions in BJJ.

In sport BJJ you are awarded points for getting to the more desirable positions. As you can see rear mount is the best position in BJJ. This is because you are able to attack your opponent and they are in a very bad spot to attack back. Because of this, the worst position is the exact opposite of the rear mount. That is the rear mount bottom.

That said, as you probably would assume you will spend the majority of your time as a white belt at the bottom of the positional hierarchy.

You Need To Learn Escapes From the Bad Positions

Since you will naturally be spending so much time in these positions, your first goal will be to learn how to escape and get into a better position. If you are rolling with a higher belt their first goal before submitting you is securing a good position. After all, you have probably heard the phrase ” position before submission” right?

They want to get you in a vulnerable position like the mount or back control before going for a submission. Since you are a white belt it is more than likely that they will succeed. Because of this, you need to learn some basic white belt escapes from all of these positions. These escapes need to be easy to execute for a BJJ white belt but still very effective at all levels.

With that in mind, let’s look at some BJJ white belt escapes from each position.

One of the first escapes that you will want to learn as a BJJ white belt is an escape from side control. Though side control is not as dominant of a position as mount or back control it is the first position you will likely find yourself in. Most likely your opponent will pass your guard and secure side control.

From side control, they will likely try to move to knee on belly and then mount or try to take your back. You don’t want to wait for them to get an even more dominant position until you try an escape, so you must first learn a few escapes from side control. The goal is to get out of bottom side control and into a better position such as guard.

Check out this video from Bernardo Faria BJJ Fanatics youtube channel. In this video, Bernardo and John Danaher go into detail on side control escapes all of which are great for white belts!

The point is that the more escapes that you have mastered from each position the harder it will be for a higher belt to submit or pin you. With that said, let’s look at this knee on belly escape from BJJ fanatics.

If your side control and knee on belly escape failed the next position your opponent is likely to move up to is the mount position. This is not a good place to be in because at this point they are in a very dominant position over you.

However, that does not mean you have to lose hope. After all, you still have a chance to pull off a mount escape. Here is another good video from Bernardo and John Danaher on effective escapes from the mount position.

The other option you opponent might choose is taking your back. Back control is very likely the position your opponent wants on you. When someone has your back that means they have plenty of attacks whereas you have very few if any.

For this reason, it is crucial that you master a few escapes from this position as a BJJ white belt. Here is a video from Gracie Ohio Jiu-Jitsu Academy of a very basic white belt escape from the back mount.

If you learn a few escapes from all of the major positions your BJJ game will vastly improve. Though nothing is going to replace time in the gym, there are some good instructionals for BJJ white belts that will help you improve your escapes.

The first one I would recommend is not a program that is only focused on escapes. However, it is my most recommended program for BJJ white belts. Though it does not only focus on escapes it does cover many of the most basic foundations escapes for BJJ. The instructional I am talking about is Foundations Of Brazilian Jiu-Jitsu by Bernardo Faria.

This is a great go-to instructional for BJJ white belts because it is focused on the fundamentals of jiu-jitsu which of course includes escapes.  That said, it is also great for people of all belt levels and is a great reference guide to brush up on the basics.

The next instructional is one that is particularly focused on BJJ escapes. That is Pin Escapes & Turtle Escapes: BJJ Fundamentals – Go Further Faster by John Danaher. This program is totally focused on the best pin and turtles escapes you need to master for BJJ. If your main goal is to get really good at escapes then this is the program for you!

If you want to advance fast in BJJ one of the areas you need to focus on a white belt is escapes. After all, you will probably be spending a lot of time pinned as a white belt. So learning a few escapes from each position will help your game immensely.