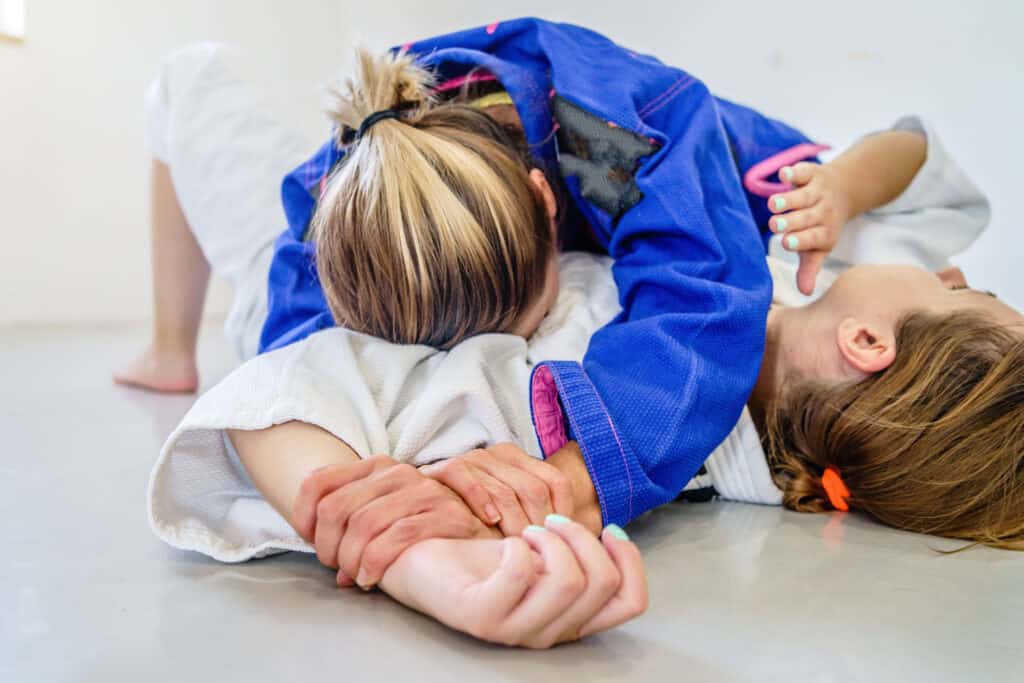 There are a ton of submissions you can learn as a BJJ white belt. That being said, I would suggest really only mastering a handful of great submissions from each position before trying to learn as many as possible. On top of that, I would focus on learning a variety of different kinds of submissions as well. You need to learn submissions that use the gi as well as submissions without the gi.

#1 Americana From Side Control

At many BJJ academies, the first submissions you will probably learn is the Americana from side control. Though you might have trouble executing this submission on a higher belt, I have found it to really come in handy on other white and blue belts. Of course, if you are a white belt you are going to probably have a hard time executing any submissions on the higher belts.

Here is a really basic video by Howcast demonstrating the Americana arm lock from side control.

#2 Paper Cutter Choke From Side Control

Here is one example that is pretty simple from Jeff Glover on the BJJfantics youtube channel!

Now that you have a few white belt submissions from side control down it is time to move on to submissions from closed guard. As a white belt, you will probably find yourself in this position pretty often. That is at least during times when you are not simply just getting smashed.

Once you got the armbar down it’s time to master a choke from the closed guard. The first choke from closed guard that you should probably master is the triangle choke. The triangle choke is a highly effective and somewhat easy submission to learn. You can learn this choke both using the gi as well as without the gi. Because of this you will see it often used in MMA.

It is a submission you will see very often in high-level BJJ competitions as well as in MMA. The reason for this is that the triangle from the closed guard is extremely effective at all levels. At the same time, it is simple enough for a BJJ white belt to learn and understand pretty quickly as well.

Check out this video of a basic triangle from the closed guard.

The last closed guard submission on this list that you must master as a BJJ white belt is the kimura from closed guard. This is truly one of the most basic BJJ white belt submissions that you need to learn. Though this submission is pretty easy to learn it can be highly effective. It is also a submission that does not require the gi so you can use it effectively in both gi and no-gi competition.

Here is a video from the Chewjitsu youtube channel teaching the kimura from the guard for BJJ white belts.

Alright, let’s move on to some submissions from the mount. If you don’t already know, the mount is a very dominant position in Brazilian jiu-jitsu. Though you might not find yourself here very often as a BJJ white belt, it is a position that you should be striving to get to.

If you are able to get to the mount that’s great but you will also need to know a few good submissions to actually be able to finish your opponent. One of the easiest and effective submissions you can learn from the mount is the Ezekiel Choke.

Check out this video of Rafael Lovato Jr teaching the Ezekiel Choke from the mount position.

Another very simple and effective submission from the mount is the cross collar choke. This choke is still used at very high levels yet is simple enough for a BJJ white belt to understand. A great example of someone using this at the highest level is Roger Gracie. Roger Gracie is considered by many to be the greatest BJJ competitor of all time.

The funny thing is that he often uses very basic jiu-jitsu submissions to submit his opponents. He is living proof that mastering the basics of BJJ can take you to the highest level of competition. One of his more common submissions that he has mastered is the cross collar choke. If he can win world championships with this basic white belt friendly submission, then it is probably one that is worth mastering.

You have already learned how to execute the Americana from side control but it is also a submission you need to learn from the mount position. Simply put the Americana is a submission that all white belts need to master. Even though it might be harder to get this submission on a higher belt, it is still very effective on other white belts and the rest of the population.

Something that is great about the Americana is that you do not need to use the gi to execute this technique. It is a great submission for white belts that you can use in both gi and no-gi BJJ.

Here is a great video of Andre Galvao teaching the Americana from the mount position.

#9 Armbar From Back Control

Perhaps the only position as ideal or more ideal than the mount is back mount or back control. This is a position that you should be aiming to get to when you are rolling with your opponent. It is definitely great to master at least a few different submissions from this position. One of the best ones to learn for a BJJ white belt is the armbar from back control.

Check out this video from Steve-O Solo’s youtube channel.

Check out this video from John Danaher and Bernardo Faria showing you in great detail how to do the perfect rear-naked choke. This video is a bit long but if you watch the whole thing you will have a great understanding of the rear-naked choke.

Putting It All Together

If you really want to step up your game as a white belt I would suggest checking out my article on the Best Instructionals For BJJ White Belts. Building your foundation with the basics of BJJ is what you need to focus on.

Continue Reading
link to Does BJJ Work In Real Life? The Truth About BJJ For The Streets