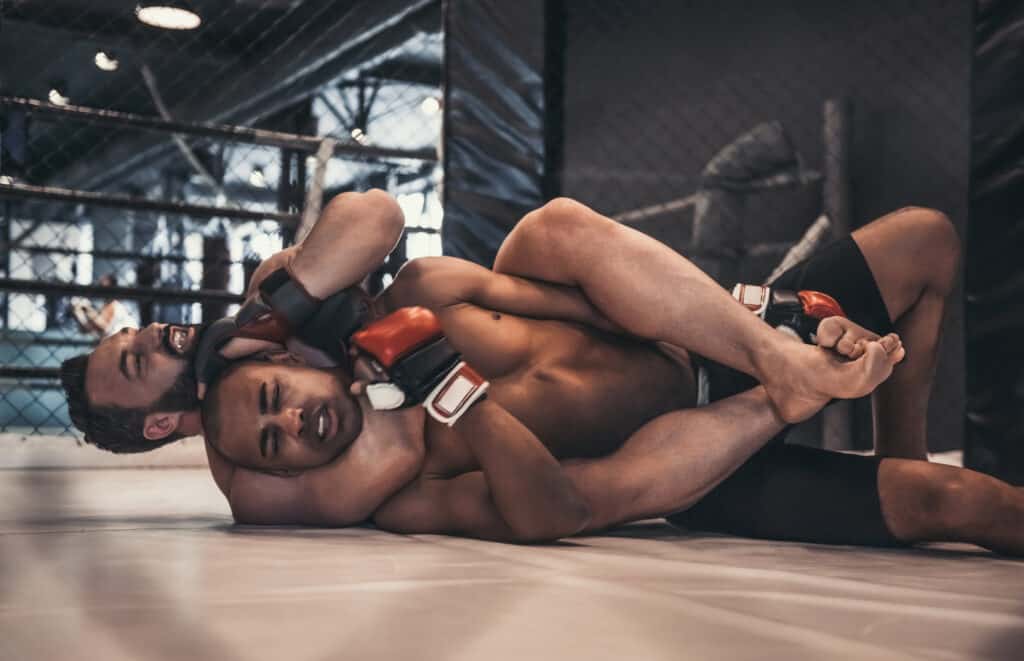 With the recent popularity of no-gi jiu-jitsu, many people are starting to wonder if no-gi is better for MMA. After all, MMA fighters do not fight in the gi. So is there any benefit for them to train in the gi for MMA? Or is no-gi jiu-jitsu better than traditional gi BJJ for MMA?

This is not to say MMA fighters should never train in the gi. Some would argue that training in the gi can make your no-gi game better. However, when you have a limited amount of time to become proficient in multiple martial arts you are probably better off working on your striking than practicing a cross collar choke that you will never use in an MMA fight.

Why No-Gi Is Better For MMA

Like previously stated the main reason that no-gi is better for MMA is because it is more closely resembles the attire you will wear in MMA. Since you don’t wear a gi in MMA, many of the submissions and throws using the gi cannot be utilized. This is not to dismiss traditional BJJ by any means. In fact, if you are learning BJJ for self-defense then there are plenty of reasons to learn how to grapple in the gi.

I understand that in real life people are also not walking around in gis either. That said, more often than not people are going to be wearing some sort of clothing. If not then you are probably hanging out with the wrong crowd. This is especially true during the colder months when people are wearing heavy jackets. If this is the case then there are a lot of similarities between their attire and a BJJ gi.

But even in the warmer months when people are wearing a t-shirt and jeans you can still use the clothing. After all, you can use their pants or shorts for grips if you need to which is not allowed in no-gi BJJ. So if you want to learn BJJ for self-defense, then I think it is great to practice both gi and no-gi jiu-jitsu. You don’t want to become too reliant on the gi, but in the right environment learning how to fight with clothing can give you a huge advantage.

One common argument someone might bring up about training gi for MMA is that the gi can help you no-gi game. There is a lot of truth to this to be quite honest. Training in the gi can help you become a better no-gi practitioner because it gives you a deeper knowledge of jiu-jitsu and can help perfect certain aspects of your game. A common argument for gi training is that you will become much better at escapes.

This is because the friction caused by the gi makes escaping harder. Since there is friction you must become more efficient at your escapes. Whereas in no-gi there is less friction and many escapes are easier to simply slip out of. So by training in the gi, you do not have any room for error when practicing escapes. Thus one would argue that your escapes will become much more perfected in gi BJJ.

Though I do not disagree with this argument you still need to balance these benefits against the benefits of spending that same time practicing your wrestling or striking. Maybe the ideal split would be to train in the gi once a week or a few times per month. However, I think that you are better off training no-gi most of the time if your goal is to become a better MMA fighter.

Cost-Benefit Analysis Of Training Gi Vs No-Gi For MMA

There are benefits of course to training in the gi such as ironing out your escapes. The problem however is that you do not get to decide what your BJJ professor is going to be teaching in class. You can’t exactly expect them to lay off the gi chokes and lasso guard because you are focused on MMA. Because of this, you are going to be spending a lot of time practicing techniques that will not be used in MMA.

If you had all of the time in the world then this might not be a problem. However, as an MMA fighter, you have to spend your time wisely to become a well-rounded fighter. Training in the gi does have a long list of benefits, especially for self-defense. That said, an MMA fighter has to run a cost-benefit analysis of each minute they spend training.

Simply put, learning all the technical aspects of learning how to use the gi when grappling is probably not the best use of time.

Since MMA fighters have to master so many aspects of fighting they need to spend their time wisely. Training in the gi has many benefits in both real life and sport jiu-jitsu. That said, spending the time needed to learn all of the gi grips, gi chokes, and throws using the gi is probably not the best use of time for an MMA fighter. Because of this, I would argue that no-gi jiu-jitsu is better than traditional gi BJJ if your main goal is MMA.

I do think that training in the gi can actually help your no-gi game out. However, I don’t think the benefits are important enough to spend a lot of time working on. You would be better of spending that time working on your wrestling or striking.